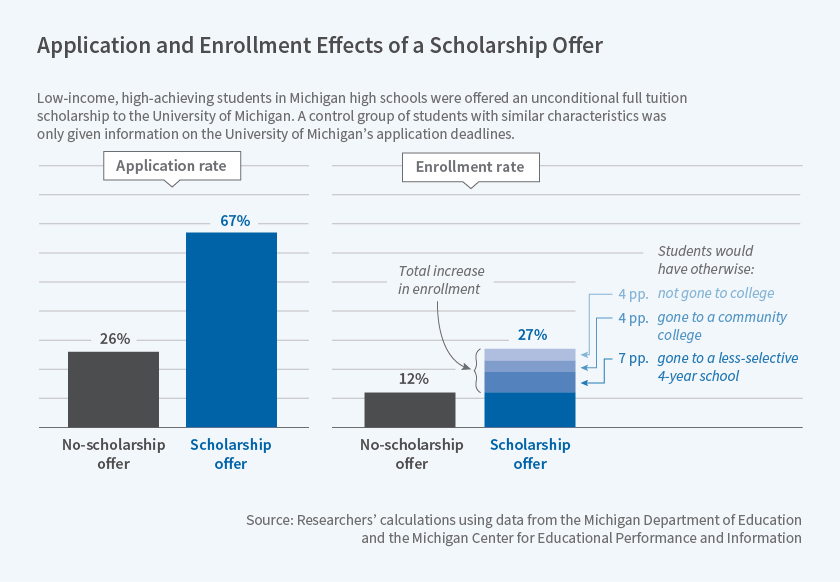 A pilot program finds that high achievers who wouldn't otherwise apply to the University of Michigan can be encouraged by outreach, information, and assurances of a full tuition scholarship.

A new Michigan initiative suggests a low-cost way for highly selective universities to attract economically disadvantaged, academically gifted students, who historically have been unlikely to apply.

In Closing the Gap: The Effect of a Targeted, Tuition-Free Promise on College Choices of High-Achieving, Low-Income Students (NBER Working Paper 25349), Susan Dynarski, C.J. Libassi, Katherine Michelmore, and Stephanie Owen analyze a pilot program that more than doubled the likelihood that students eligible for full-tuition scholarships would enroll at the University of Michigan.

Nationwide, 12 percent of college students come from families in the bottom fifth of the income distribution, while 28 percent are from the top fifth. At many of the most selective schools, more students come from the top 1 percent than from the bottom 50 percent. A majority of low-income, high-achieving students do not apply to selective schools due to some combination of uncertainty about their suitability for an elite school, overestimation of what such a school would cost, and procedural barriers.

The Michigan program, known as the HAIL (High Achieving Involved Leader) Scholarship, encouraged students to apply through personalized mailings, notifications to parents and school principals of eligible students, and an explicit promise of four years of free tuition and no obligation to file financial aid forms. In most cases, if the students did fill out and submit the financial aid forms, they could receive more aid.

The four-year commitment assured families that their student was eligible for aid from a competitive college and relieved them of uncertainty over whether the scholarship would continue. Students were notified of their eligibility via a heavy, large, glossy package in the colors of the University of Michigan. This made it difficult to ignore the mailing and enhanced its legitimacy. The packages, which cost the program about $10 each, included a personalized letter from the university president.

The study focused on high school juniors in 2015 and 2016. Eligible students were identified based on whether they received free or reduced-cost school meals and had achieved high SAT scores and grade-point averages. All Michigan high school students are required to take the SAT, boosting the pool of potential low-income college applicants. Students in the control group attended different high schools than those targeted by the program. In all, 4,000 students were monitored over the two-year pilot.

The program had its largest impact among students living in rural areas and communities farthest from the University of Michigan. In the control group, low-income black students — who tend to live in urban areas — were twice as likely to apply and enroll in the University of Michigan as were white and Asian students, who were more likely to be from rural communities. Intervention with the HAIL Scholarship equalized the outcomes across racial groups. The program also narrowed the application gap between men and women.

The study found that the effects of the program persisted once students entered the University of Michigan, with those offered the HAIL Scholarship 13.5 percentage points more likely than those in the control group to continue for a second year.

Closing the Gap: The Effect of a Targeted, Tuition-Free Promise on College Choices of High-Achieving, Low-Income Students