Older Americans Would Work Longer if Jobs Were Flexible 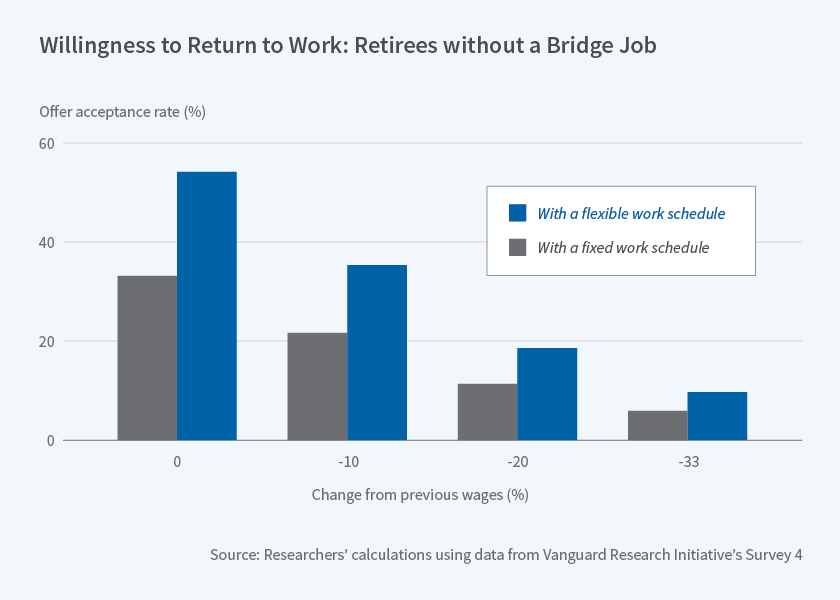 About 40 percent of retirees surveyed were willing to return to work in a job like their previous one, but 60 percent would return if the schedule were flexible.

The share of Americans over 65 is projected to hit 40 percent by 2050, up from 20 percent in 2007. As the percentage of older Americans rises, concern is growing about the financial strains associated with a larger number of retirees being supported by each active worker. There's also worry that some employers may face labor shortages.

A possible response would be to enact or encourage policies that would allow older Americans to work beyond traditional retirement ages. In Older Americans Would Work Longer if Jobs Were Flexible (NBER Working Paper No. 24008), John Ameriks, Joseph S. Briggs, Andrew Caplin, Minjoon Lee, Matthew D. Shapiro, and Christopher Tonetti find that there is a large, untapped pool of older Americans who have a strong desire to keep working, sometimes at wages significantly lower than the ones they earned previously, but only if they could have flexible work schedules.

Determining what sort of policies would encourage longer working lives is challenging because it is difficult to disentangle the roles of labor supply and labor demand in determining existing patterns of later-life labor market behavior. Are employers unwilling to adapt pay and work schedules to accommodate those who want to slow down but keep working? Is there a low willingness on the part of older individuals to continue working under current market and incentive conditions? The researchers sought to separate the supply- and demand-side factors by surveying older households.

Their primary data source was the Vanguard Research Initiative, a linked survey-administrative data panel drawn from account holders at The Vanguard Group, Inc. The researchers used the sample of 3,000 respondents who completed a survey related to later-in-life labor market activities. The survey focused on labor market participation and retirement, including a detailed history of employment, job search behavior, retirement paths, and employment in post-career "bridge" jobs.

Among those who had not held a post-career "bridge" job, the researchers found that only 11 percent had searched for a job opportunity after leaving their career job, but a third of them would be willing to work again in a job that had characteristics similar to their previous one.

The researchers conclude that demand-side factors play an important role in explaining later-life labor market behavior, writing that "older Americans' labor force participation near and after normal retirement ages is limited more by a lack of acceptable job opportunities or low expectations about finding them, in particular jobs with part-time or flexible schedules, than by unwillingness to work longer."

Older Americans Would Work Longer If Jobs Were Flexible