Where Children Grow Up Affects How Much They'll Earn 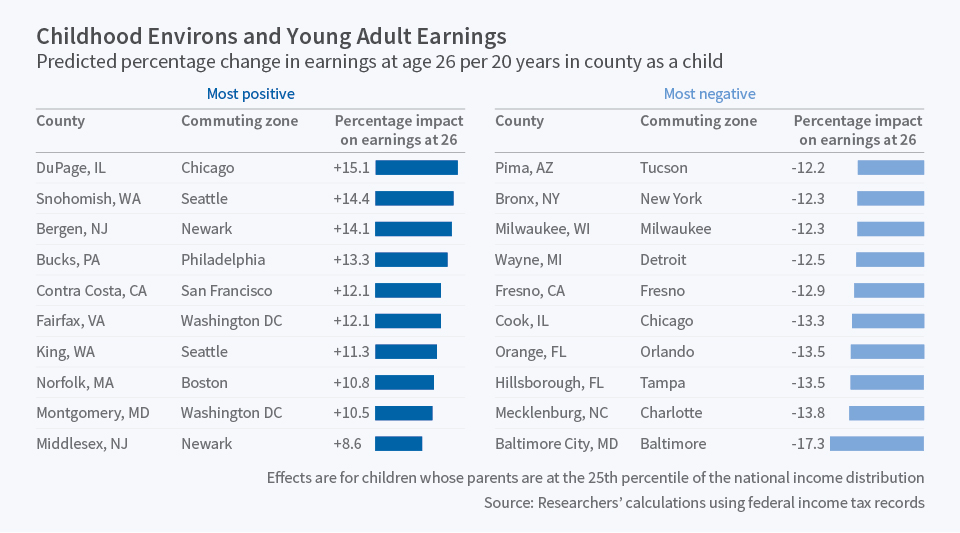 On average, a child who moved from downtown Chicago to the city's western suburbs at birth would earn almost 30 percent more than one who grew up downtown.

Parents move their families for job opportunities, bigger houses, and better schools. Those who believe that where their children are raised will affect their future earnings are right. That's what Raj Chetty and Nathaniel Hendren find in The Impacts of Neighborhoods on Intergenerational Mobility II: County-Level Estimates (NBER Working Paper 23002).

Using data on the variation in the age of children when families move, the researchers estimate how growing up in each of 3,000 U.S. counties affects a child's earnings at age 26. For instance, they find that children who moved from Manhattan to Queens at younger ages have higher earnings. After ruling out other potential explanations such as residential sorting, they argue that this suggests Queens has a positive impact on future earnings. They find that, for children whose parents are at the 25th percentile of the national income distribution, each additional year of childhood spent in a county that is one standard deviation (SD) "better" than the average county increases mean annual earnings at age 26 by 0.5 percent, or $135. If a child lives in a one-SD-better county for 20 years, they predict annual income would be, on average, 10 percent higher at age 26. Likewise, children at the 75th percentile of the parental income distribution would see an increase of 0.3 percent of their mean earnings, or $130, for each additional year spent in a one-SD-better county.

The findings allow the researchers to identify the best and worst areas to grow up for children from low-income families. Among the 100 largest counties, the western suburbs of Chicago (DuPage County) rank as the best place for upward mobility—income at age 26 is 0.8 percent higher per year of childhood relative to an average county. Expanding this result over 20 years, the average income of children from DuPage County is 16 percent higher than the average over all locations. Growing up in downtown Chicago (Cook County), meanwhile, decreases earnings by 0.6 percent per year relative to an average county, or 13 percent over 20 years. Thus, a child who moved from downtown Chicago to the western suburbs at birth would have almost 30 percent higher average earnings.

The study documents the characteristics of places that exhibit the greatest upward mobility of children from low-income families. These are counties with less racial segregation, less income inequality, and higher quality schools. Counties with better schools and higher levels of social capital improve outcomes. Differences in the places where blacks and whites are raised could explain about 20 percent of the black-white earnings gap. Place effects matter more for boys than for girls, especially in the areas with the lowest rates of upward mobility, such as Baltimore and Detroit.

The researchers note that the counties that are associated with greater upward mobility and higher income are often more expensive to live in, especially in large, segregated commuting zones. However, there are also some "opportunity bargains"—places that improve outcomes with less expensive rental costs. For example, Hudson County, New Jersey, increases earnings by 0.24 percent per year for low-income families relative to Queens, despite similar rents.

The Impacts of Neighborhoods on Intergenerational Mobility II: County-Level Estimates