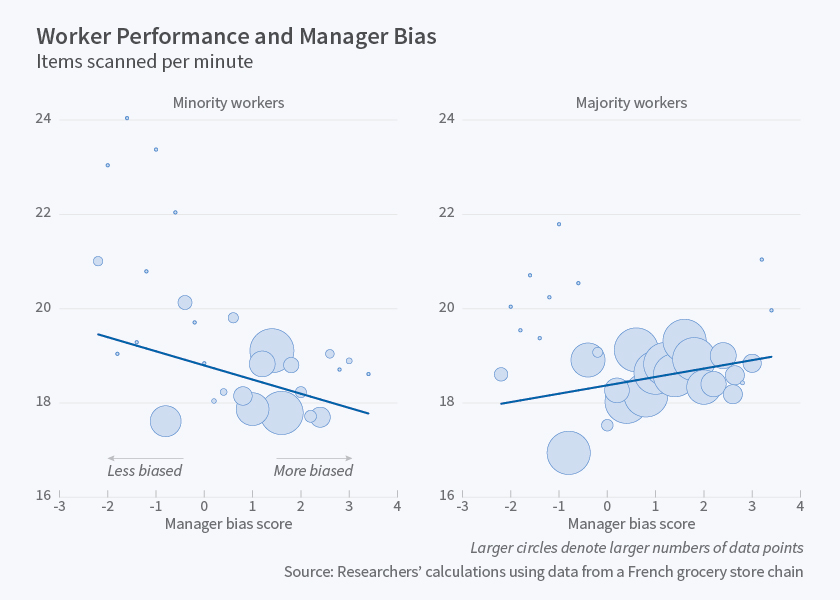 Minority cashiers at a French grocery chain scanned articles slower when working shifts for managers who appear to be biased.

What happens to the job performance of minority workers when they are managed by someone who is biased against their group? In Discrimination as a Self-Fulfilling Prophecy: Evidence from French Grocery Stores (NBER Working Paper 22786), Dylan Glover, Amanda Pallais, and William Pariente follow workers at 34 outlets of a French grocery chain, tracking productivity, absences, and time worked to determine job performance. Their sample drew from new cashiers who had been hired for six-month trials on a government-subsidized contacts known as a Contrat de Professionnalisation, or CP—which meant they were quasi-randomly assigned managers and shifts.

Managers' degree of bias against minority groups was determined using an Implicit Association Test (IAT), a widely used method in which the speed of association between two concepts determines the level of bias. The researchers tested the association between what they described as "(1) traditionally French or North African sounding names and (2) words indicating worker competence or incompetence." They then linked the information on each manager's test results with data on the performance of the cashiers whose shifts that manager oversaw.

Because France precludes workplace queries regarding race, ethnicity, or religion, the researchers submitted the names of the cashiers to Inter Service Migrants, Centre d'Observation et de Recherche sur l'Urbain et ses Mutations, which specializes in discrimination testing, to determine each CP worker's minority status. That organization divided the names into these categories: European, North African, sub-Saharan African, mixed or undetermined, and other, including names of Turkish and Asian origin.

Using the store-tracked performance metrics, the researchers found that minority cashiers performed worse under biased than under unbiased managers, while the performance of non-minority cashiers was not affected by manager bias. Minority cashiers scanned items slower during shifts under biased managers and they took more time between customers. Minorities were more likely to be absent when scheduled to work with biased managers and, when they did come to work, they spent less time at the store. While on average, minorities performed at the 53rd percentile of average worker performance, they performed at the 79th percentile when working with unbiased managers. Moreover, because cashiers are paid based on time worked, the authors estimate that manager bias leads minorities to earn 2.5 percent less.

In a telephone questionnaire conducted with former CP cashiers, minority cashiers did not report that the managers disliked them or that they disliked biased managers. In fact, biased managers were less likely to assign minorities to cleaning, the least pleasant of cashiers' tasks. Instead, biased managers simply appeared to interact less with minority cashiers, perhaps due to discomfort with members of the minority group or fear of appearing biased. And for these cashiers, worker-manager interaction is a very strong predictor of a worker's performance in a given shift.

Discrimination as a Self-Fulfilling Prophecy: Evidence from French Grocery Stores