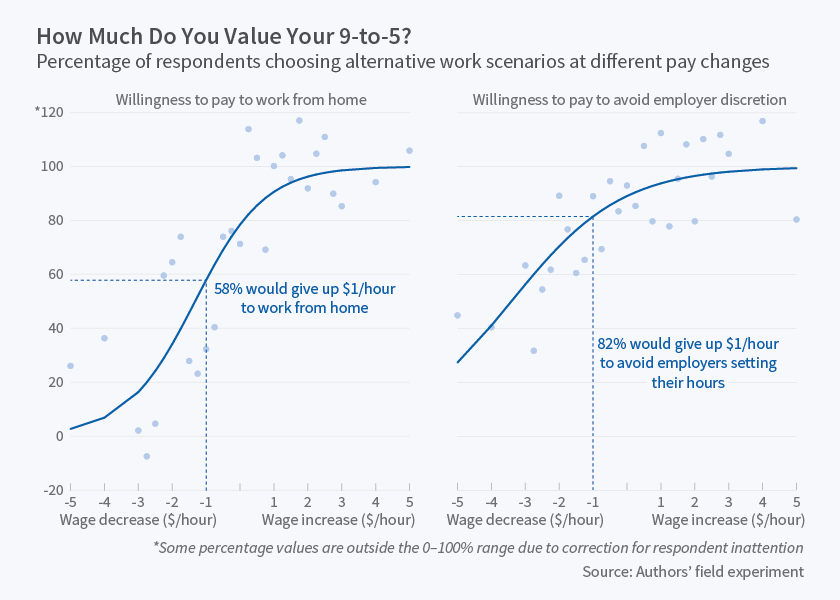 Nearly 40 percent of applicants said that they would not take a job if its schedule fluctuated at the employer's will, even if it paid 25 percent more than the same job in a 9-to-5 schedule.

Workers are willing to accept lower pay in return for a standard Monday to Friday work week and for the opportunity to work from home, but not for the right to determine how many hours they will work. These are among the findings of Valuing Alternative Work Arrangements (NBER Working Paper 22708) by Alexandre Mas and Amanda Pallais.

The researchers posted ads for telephone-interviewer positions on job boards in 68 metropolitan areas. Respondents were asked to choose between a traditional schedule of 9 a.m. to 5 p.m., Monday through Friday, and a randomly assigned alternative arrangement. The jobs were otherwise identical, and applicants were assured their schedule preference would have no bearing on their hiring prospects.

The alternatives included employee-friendly options such as flexible schedules and working from home, and more restrictive options that gave employers the discretion to change schedules on short notice and to assign weekend and evening shifts. The researchers randomly varied the wage differences between the two options they offered as a way to assess the value workers placed on the various schedule structures.

The study analyzed data from 7,000 applicants. Of all the employee-friendly options, applicants valued the chance to work from home the most. On average, they were willing to accept 8 percent lower wages for this privilege.

The researchers were surprised to discover that a large majority of applicants placed little or no value on options that would have allowed them to decide how many hours they wanted to work and when. But while this was the case on average, a quarter of the applicants indicated they would trade at least 10 percent of their pay for the opportunity to make their own schedule.

Applicants were so strongly attached to the traditional 9-to-5, Monday-Friday work schedule that, on average, they indicated that they would take a pay cut of 20 percent to avoid jobs in which employers could change their schedules from week to week. Nearly 40 percent of applicants said that they would not take a job in which the schedule fluctuated at the employer's will even if it paid 25 percent more than the same work with a 9-to-5 schedule. The researchers determined that the applicants weren't so much averse to employer discretion as they were to the possibility of working evenings and weekends.

The results of the call-center study were affirmed by a survey of participants in the web-based Understanding America Study, which contacts a nationally representative sample of workers and job seekers. Survey participants subject to schedule changes at their employer's discretion were willing to accept major pay cuts in return for a traditional 9-to-5 job; a quarter of them said that they would give up at least 44 percent of their pay to become 9-to-5ers.

Preferences over job attributes differed by gender. Women "have a higher valuation for worker-friendly work arrangements and a stronger distaste for employer discretion than do men." Women were willing to take substantially larger pay cuts than men for the opportunity to work from home and to avoid jobs scheduled at the employer's discretion.