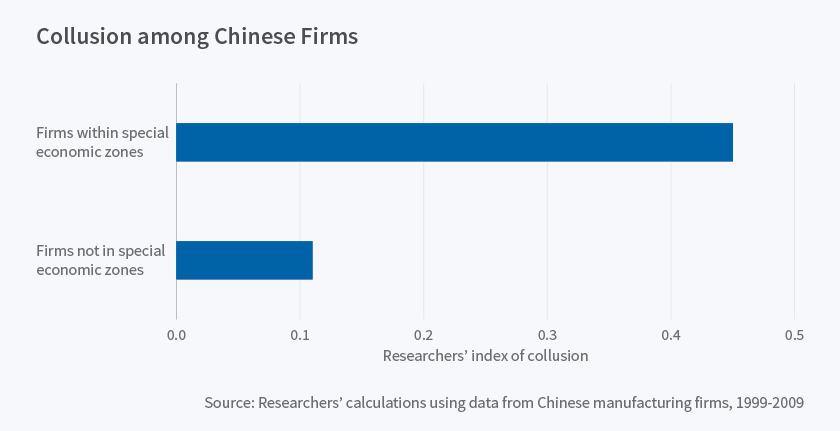 Firms in the same industry often locate in the same geographic area. Alfred Marshall suggested in 1890 that such clustering reduced the cost of moving goods, people, and ideas. Subsequent work has found that clusters can enhance productivity by increasing competitive pressure. This result has been invoked to justify industrial policies that encourage agglomeration.

These considerations notwithstanding, Wyatt J. Brooks, Joseph P. Kaboski, and Yao Amber Li note that "there is an even older concern—dating back to at least Adam Smith—that gathering competitors in the same locale could instead lead to non-competitive behavior." In Growth Policy, Agglomeration, and (the Lack of) Competition (NBER Working Paper 22947), they test for non-competitive behavior associated with geographic concentration and cluster-encouraging policies.

The researchers study the pricing behavior of Chinese manufacturing firms in industrial clusters. They find strong evidence of non-competitive pricing in some clusters, and report that non-competitive behavior appears to be four times greater in China's special economic zones (SEZs) than in other areas. Firms are incentivized to form clusters in SEZs with tax breaks, infrastructure investment, and promises of local government cooperation.

The analysis focuses on firms' markups—the ratio of the firm's product price to its marginal cost. A competitive firm's markup will not depend upon the market share of other firms in its industry and, in many models of firm behavior, should rise as its market share increases. Because colluding firms consider the impact of their pricing on one another, each firm's markup will depend more upon the total market share of the set of colluding firms in its industry than on its own market share. Thus the researchers can test for the presence of collusion by exploring whether the pricing (markup) at a given firm depends only on its own market share, or on those of its rivals in the cluster.

The researchers apply their test to Chinese manufacturing firms included in the Annual Survey of Chinese Industrial Enterprises. Conducted by the National Bureau of Statistics of China, the survey covers all state-owned and private enterprises with annual sales of at least $750,000. From 1999 to 2009, the number of firms in the survey ranged between approximately 162,000 and 411,000. Survey records contain detailed information on revenue, fixed assets, labor, and geographic location. The researchers construct market shares using sales data, and they estimate firm markups.

The authors evaluate their test using a series of validation and placebo tests. In particular, they show that their test correctly detects "collusion" among firms with a common owner, which are firms that clearly ought to be pricing cooperatively. Moreover, placebo tests return a lack of collusion, which demonstrates that this result is not spurious. Finally, they show higher rates of collusion in industries with differentiated goods. Previous literature has shown a tendency for firms to formally collude in these industries, since firms in these industries cannot insulate themselves from competition through product differentiation. The test is a methodological innovation that can be applied to test for firm cooperation in other scenarios.

Incentives designed to create industrial clusters and foster innovation by bringing rival firms into close proximity are ubiquitous in both the developing and developed world. The researchers do not consider the effect of these programs on economic growth, but they conclude that programs designed to enable cooperation among firms can also have the unintended side effect of encouraging collusion.