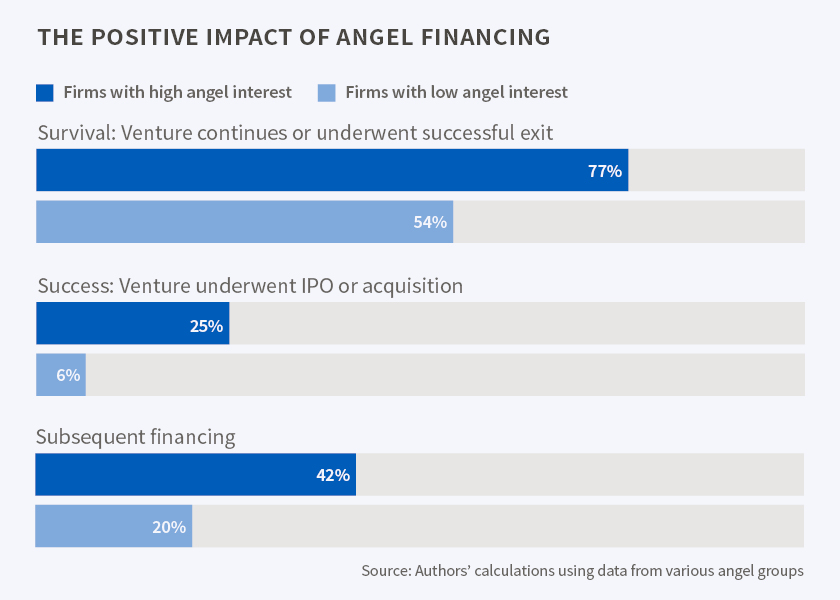 Firms which are backed by angel investors are more likely to survive, create more jobs, and have a greater chance of successfully exiting the startup phase than otherwise comparable firms without this support.

Angels — wealthy individuals who often are actively involved in the startups they back, and who typically are not professional investors — have surpassed venture capitalists as a funding source for startup enterprises in the United States. They are estimated to have had $24.1 billion of capital deployed in 2014, up from $17.6 billion in 2009. Investments by angels and angel groups grew even faster in other countries during this period, nearly doubling in Europe and tripling in Canada, starting from a much lower level.

Angel investors, like venture capitalists, fund early-stage entrepreneurs and serve as mentors or outside directors of startups. They are often more idiosyncratic than venture capitalists and uniquely focused on the firms they back.

According to research by Josh Lerner, Antoinette Schoar, Stanislav Sokolinski, and Karen Wilson presented in The Globalization of Angel Investments: Evidence across Countries (NBER Working Paper 21808), angels are beneficial to the growth, performance, and survival of startups, even if they are located in economies that are not friendly to entrepreneurs. Startups that have angel backing are at least 14 percent more likely to survive for 18 months or more after funding than firms that do not. Angel-backed firms hire 40 percent more employees, and angel backing increases the likelihood of successful exit from the startup phase by 10 percent, to 17 percent. In countries other than the United States, angel-funded firms are also more likely to attract follow-on financing.

The researchers studied 13 angel investment groups in 12 nations — Argentina, Australia, Belgium, Canada, China, Germany, Italy, Mexico, New Zealand, Switzerland, the United Kingdom, and the U.S. They gathered data on 295 startups funded by these angel groups and 1,287 that they did not fund. These startups were based in the nations for which the authors had information on angel groups, as well as nine other nations. The average firm in the sample had 10 employees and was seeking to raise $1.2 million. Four in 10 firms were already generating revenue.

By using regression discontinuity analysis and comparing firms that had similar ex ante likelihood of receiving angel investor support, but that differed in their ex post funding outcomes, the authors determine not only whether angel investors add value but also how their impact and the types of transactions they undertake vary with the development of a nation's venture market. The authors note that because their data on angel investors is likely to come from comparatively prominent and organized groups, their findings may reflect an upper bound of angel-investor impact.

Across nations, firms that attracted a high level of interest among angel investors were more likely to grow, issue patents, win new rounds of funding, and have a successful exit from the startup phase. In nations with below-average venture activity, the startup firms had greater struggles, but the impact of angel interest was again positive. In countries with less conducive entrepreneurial environments, companies seeking angel funding appeared to be older and larger on average and usually were already generating revenue compared to applicants in more entrepreneurship-friendly countries. Yet despite their apparent greater maturity, the firms in these markets sought smaller amounts of funding. The researchers suggest that firms seem to "self-censor" when they apply to angel groups in the less venture-friendly markets, reflecting the fact that the angel investors themselves are more risk-averse or less experienced in assessing very-early-stage investments.

Having a robust angel community appears to be an important predictor of startup success. It is important to note that in many countries the level of angel investment is very small, so it might not be a panacea for larger problems of unemployment and slow economic growth. Nonetheless, the researchers conclude, "the positive impact of angel financing on the development of portfolio firms remains consistent across the nations...regardless of the level of venture activity and the entrepreneur-friendliness of the environment."

The Globalization of Angel Investments: Evidence across Countries