What If Virus Lockdowns Targeted People Based on Vulnerability? 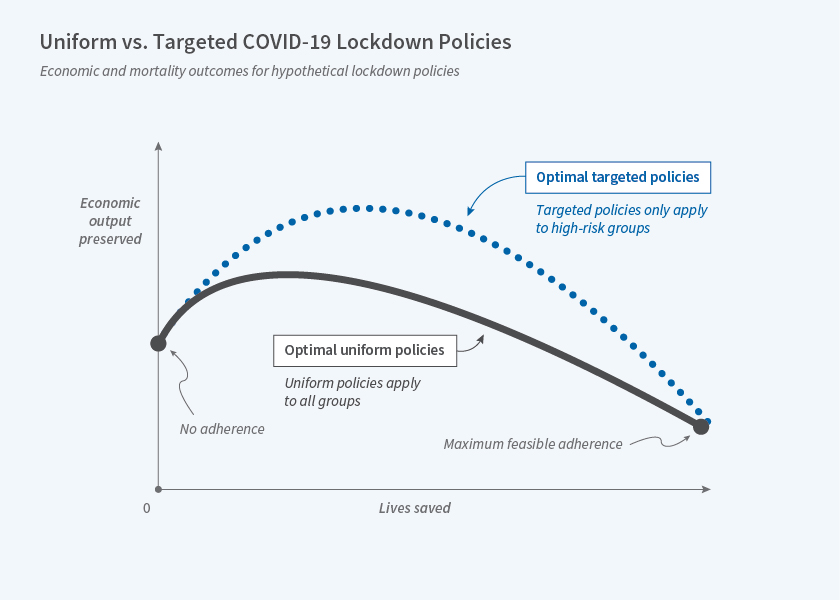 Simulations suggest substantial reductions in the economic cost of pandemic response from targeting seniors for restrictions on personal mobility and interpersonal interactions.

An age-based, targeted policy of lockdowns could substantially reduce the economic cost of pandemic response, according to research reported in A Multi-Risk SIR Model with Optimally Targeted Lockdown (NBER Working Paper 27102). Daron Acemoglu, Victor Chernozhukov, Iván Werning, and Michael D. Whinston formulate a model of disease spread and conclude that varying restrictions on personal mobility in the COVID-19 pandemic across various groups depending on their vulnerability to the virus could lower the economic cost of these restrictions. The researchers estimate that a semi-targeted approach that isolates only seniors could reduce the economic loss by half, relative to a uniform lockdown policy, while also reducing the number of lives lost.

To compare broad-based and targeted lockdown models, the researchers develop a simulation model that is calibrated to capture broad features of the COVID-19 pandemic, the macroeconomy, and the interactions between the two. The model illustrates key trade-offs, but is not designed to precisely match data from the United States or any other nation.

The researchers adopt a Susceptible-Infectious-Recovered (SIR) modeling structure in which those who fall ill and recover become immune to the disease, leading to a decline in the susceptible population. They divide the adult population into three groups: young, ages 20–49; middle-aged, 50–64; and old, 65 and over. The 65-and-over group has 20 percent of the earnings of the younger groups and, crucially, faces a much higher mortality rate from COVID-19. The average mortality rate given infection rises from 0.001 percent for the youngest group, to 0.01 for the middle aged, to 0.06 for seniors. The study assumes that a vaccine will be fully available within a year and a half.

The researchers perform a stylized calculation designed to trade off the benefit of saving lives and the economic cost of a shutdown. With uniform policies, the options available to policymakers are grim. An optimal policy keeping adult mortality to less than 0.2 percent would create economic damages equivalent to 37.3 percent of one year’s GDP. If policymakers instead prioritized the economy and attempted to limit economic damages to less than 10 percent of one year’s GDP, they would have to put up with a 1 percent mortality rate within the adult population.

When the researchers allow the degree of lockdown to vary by age group, they find that the policy that balances economic costs and mortality gains starts out with those under 65 facing a less stringent lockdown and returning to work more rapidly than in the uniform lockdown case. The oldest group, in contrast, remains under complete lockdown until the arrival of a vaccine. Such targeted lockdown policies improve public policy trade-offs considerably. For example, adult mortality could now be kept to less than 0.2 percent with economic damages of 24.8 percent, or economic damages of no more than 10 percent are now consistent with a mortality rate of 0.48 percent.

The researchers find that for their calibration of the difference between the young and the middle-aged, both the economic and mortality benefits of allowing even looser restrictions on the youngest (under-45) group, relative to the 45–64 group, are very small. They also find the reduction in the economic cost of a lockdown that comes from the shift from a uniform to a targeted lockdown remains in the presence of other mitigation measures, such as testing. Reducing interactions between seniors and the younger groups, for example through tight restrictions on who can enter nursing homes and segregated hours for shopping at grocery stores and pharmacies, could further reduce the economic cost of pandemic response.

The researchers caution that their calculations do not take account of many real-world variables and uncertainties, such as economic heterogeneity and factors besides age that affect vulnerability to the virus. But they find broad support for the conclusion that, compared with uniform policies, risk-targeted responses are likely to entail lower economic costs for a given level of reduction in pandemic-induced mortality or could save many lives for a given level of economic damage.