Age-Friendly Jobs on the Rise, and Not Just for Older Workers 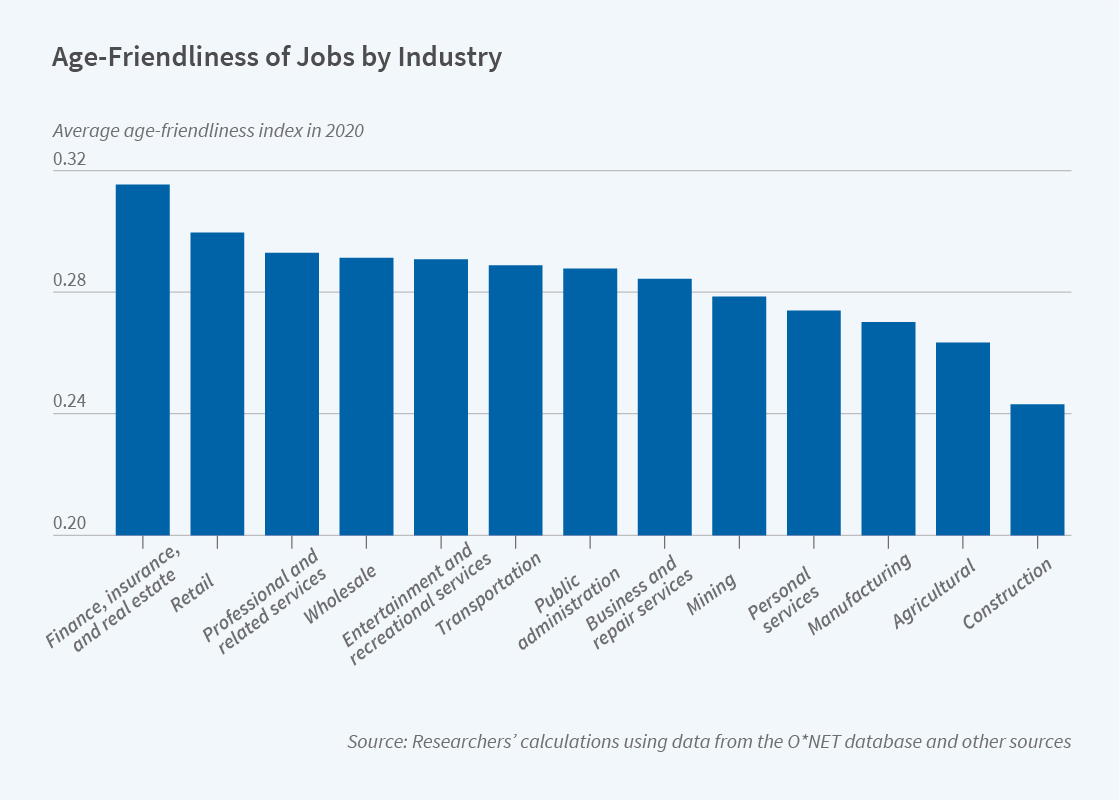 As the US population grows older, supporting employment at older ages can be an important contributor to economic growth. In The Rise of Age-Friendly Jobs (NBER Working Paper 30463), Daron Acemoglu, Nicolaj Søndergaard Mühlbach, and Andrew J. Scott build an index to assess whether occupations in the US economy have become more accommodating to older workers. Their resulting Age-Friendliness Index (AFI), aggregated across all jobs, increased by 8 percent between 1990 and 2020.

The AFI is created in four steps. First, the researchers use the US Department of Labor’s O*NET descriptions of 244 job attributes for each of 873 occupations. Second, they rely on past research on the preferences of older workers to establish weights for these attributes. This involved nine categories: schedule flexibility, telecommuting, physical job demands, pace of work, autonomy at work, paid time off, working in teams, job training, and meaningful work. Absence of physical work, paid time off, and schedule flexibility received the largest weights. Third, they use relative weights reflecting the extent to which older workers’ preferences differed from those of younger workers. The fourth step, enabled by machine learning algorithms, correlates 17,000 descriptors for each O*NET occupation with these nine components of age friendliness and builds an overall index using the absolute and relative weights.

Overall, employment in above average age-friendly occupations rose by 49 million workers. Given that the AFI is positively correlated with the share of older workers, these changes appear to favor creation of new, more accommodating jobs for older workers. Indeed, employment of those aged 50 years and above accounts for 28 million of the 42 million worker increase in US employment between 1990 and 2020.

However, closer examination shows that older workers were not the main beneficiaries of the increase in age-friendly jobs. While older female and college-graduate workers have moved into more age-friendly jobs since 1990, so have women and college graduates of all ages. Men without a college degree have not done so, however. A key explanation for this finding is the large number of these men working in manufacturing and construction, industries with relatively few age-friendly jobs and which have seen the least improvement in their age friendliness. A related reason for this pattern may be that characteristics that make jobs friendly to older workers also make them attractive to women and college graduates, who may have been able to outcompete older nongraduate men for these jobs.

The Rise of Age-Friendly Jobs