Automation Can Be a Response to an Aging Workforce 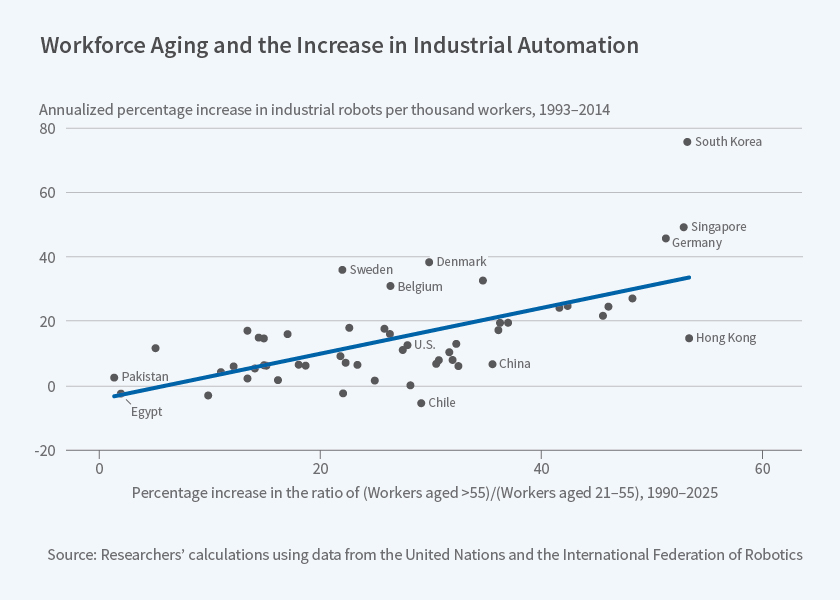 New technology can sometimes replace workers in jobs for which there are no longer enough humans.

Some worry that rapid technological progress, specifically in automation and robotics, may lead to workers being replaced by machines in many industries, and that this will generate societal disruptions not seen since the onset of the Industrial Revolution. The authors of Demographics and Automation (NBER Working Paper No. 24421) offer a different narrative. Daron Acemoglu and Pascual Restrepo show that changing demographics are one factor that relates to the adoption of new technologies. An aging workforce leads to automation, particularly through robotics, as employers react to a scarcity of middle-aged workers. New automation and robotic technologies are deployed more rapidly in countries where young and middle-aged workers are comparatively scarce.

The researchers study the demographic differentials within industries and between countries in an effort to explain the large country-to-country differences in the adoption of new automation and robotic technologies. The number of industrial robots per thousand workers in the U.S. manufacturing sector, for instance, stood at 9.1 in 2014; the numbers were significantly higher in Japan (14.2) and Germany (17.0), both of which have older populations.

Using data from a variety of sources, including the International Federation of Robotics, the researchers zero in on the age distribution of the working population as a potential driver of robotic innovation. They define middle-aged workers as those between the ages of 26 and 55, and older workers as those over the age of 55. They find that countries that are undergoing more rapid aging, meaning that they are experiencing a greater proportional decrease in the number of middle-aged workers relative to older workers, invest significantly more in robotics. They are more likely to develop new technologies and manufacture robots, and to deploy these robots in production.

Population aging can explain almost 40 percent of the country-to-country variation in the adoption of industrial robots. The researchers estimate that a 10 percentage point increase in the ratio of the number of middle-aged to older workers is associated with 0.9 more robots per thousand workers. In their sample of developed countries over the last two decades, the average number of robots per thousand workers was three.

The researchers estimate that demographic differences can explain 25 percent of the gap in the number of robots per worker between the United States and Germany. They also find that the shift to automation is more pronounced in industries that traditionally rely more heavily on middle-aged workers.

While the implications of population aging for a nation's productivity are ambiguous, and depend on how technology responds to demographic change, the implications for the relative productivities of specific industries are clear: "[B]ecause of the induced increase in automation, industries with the greatest opportunities for automation should increase their value added per worker relative to other industries."