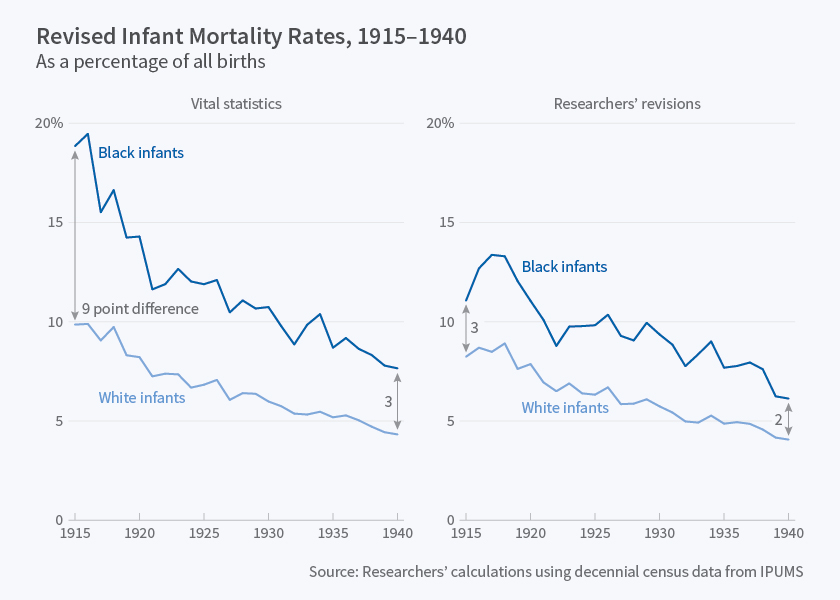 The incidence of African American infant mortality in the early 20th century and its subsequent decline both were less dramatic than standard data suggest.

Vital statistics data on infant mortality rates in the United States have long shown a large disparity between African Americans and whites in the early years of the 20th century, as well as a narrowing in this disparity over the course of the century. New data, reported in Revising Infant Mortality Rates for the Early 20th Century United States (NBER Working Paper 23263) by Katherine Eriksson, Gregory T. Niemesh, and Melissa Thomasson, suggest that standard measures overstated the infant mortality rate for African Americans. Revised data suggest that black infant mortality rates in the early years were as much as 40 percent lower than officially reported, and that the degree of convergence was correspondingly overstated.

Infant mortality rates are calculated by dividing the number of registered deaths of infants by the number of registered live births within a calendar year. Using newly released Bureau of the Census data, the researchers conclude that until at least 1940, these data were distorted by severe under-registration of births, particularly among blacks living in the South. Deaths, in contrast, appear to have been accurately reported, perhaps because families were required to obtain a death certificate for a ceremonial burial.

The new study was made possible by the release of micro-level data from the 1940 census. Under federal privacy laws, such personal data cannot be made public until 72 years after a census is taken. Combing through the 1920, 1930, and 1940 censuses, the researchers tally discrepancies between the number of children counted for each state by age and race with corresponding figures from certificates filed in their birth year.

Babies born in the more urbanized North had a higher registration rate than those born in the largely rural South. Earlier data had shown that infant mortality was higher among blacks in the North than in the South; the new data suggest that the gap was wider than previously reported and that it did not close until 1940. The researchers conclude that "accounting for underregistration bias...dramatically changes the interpretation of the differential health risks faced by black infants across the two regions."

One consequence of the finding that black infants in the early part of the century had lower mortality rates than previously thought is that the decline in the mortality rate was less pronounced. The revised figures suggest that the mortality rate fell less sharply from 1915 to 1940 — by 44 percent rather than 59 percent.

By the 1960s, there was almost no gap between the revised and published rates. The researchers attribute this to the increasing proportion of babies delivered in hospitals and to increased incentives to register births in order to provide proof of age for school attendance, a driver's license, and government benefits.