The Magnitude and Distribution of Job Losses Early in the Pandemic 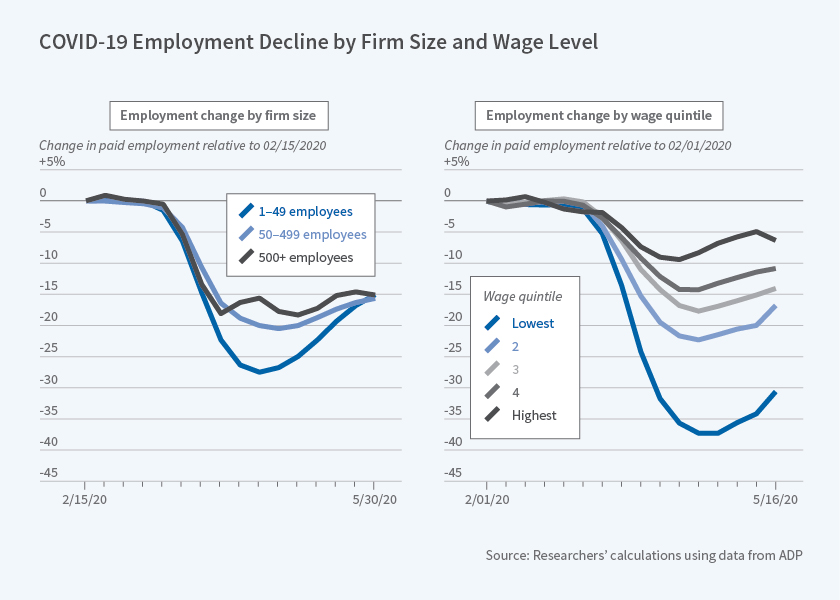 In the first three months, employment fell 30 percent for those in the bottom quintile of the wage distribution, compared with a 5 percent drop among those in the top quintile.

The first few months of the COVID-19 pandemic saw a historic decline in employment in the United States. More than a fifth of the workforce was laid off through the end of April, an experience that was unprecedented in the post-World War II period. Many job losses came from businesses suspending operations, often in response to state stay-at-home mandates. Low-wage workers and small businesses were hardest hit.

The pandemic-related downturn differed from other modern recessions in both the speed and magnitude of job loss. Tomaz Cajner, Leland D. Crane, Ryan A. Decker, John Grigsby, Adrian Hamins-Puertolas, Erik Hurst, Christopher Kurz, and Ahu Yildirmaz present systematic evidence on these employment effects in The US Labor Market during the Beginning of the Pandemic Recession (NBER Working Paper 27159).

The researchers analyze weekly data from ADP, the nation’s largest payroll processing firm. These data suggest that between mid-February and mid-April, nearly 27 million workers lost their jobs, with employment rebounding by 7 million jobs between late April and late May. The employment decline for workers in the bottom quintile of the wage distribution through late May, 30 percent, was six times greater than the 5 percent drop for workers in the top quintile. Employment losses were 4 percentage points larger for women relative to men with only a small portion of the difference explained by industry and firm size.

The ADP payroll data, which cover about one-fifth of private sector workers in the US, distinguish between active employees and paid employees. Active employees include those who are on the payroll but did not report any hours, or receive any pay, during a pay period. Workers on unpaid leave are counted as active employees. Paid employees, in contrast, include only those who reported positive hours and received a paycheck. The researchers find that active employment dropped by 11 percent, while paid employment fell 21 percent, between mid-February and mid-April, which suggests that a large fraction of workers who lost their jobs were on layoffs that were intended to be temporary.

Business shutdowns were a key factor in the job losses. The researchers find that about one-quarter percent of lost paid employment through late April was attributed to business exits — firms that reported no employment. Small businesses experienced the largest declines in employment during that time period. On average. firms with fewer than 50 employees laid off more than 25 percent of their workforces, while those with more than 100 employees laid off between 15 and 20 percent. Over one-third of the employment rebound between late April and late May resulted from the reopening of previously shuttered firms. When these firms reentered, they had employment levels that were 40 percent lower than their pre-pandemic levels. Much of the employment growth both for reentering firms and continuing firms that occurred between late April and late May resulted from the recall of workers who were temporarily laid off.

Average wages rose by more than 5 percent as more lower-paid than highly paid workers became unemployed. In fact, over 10 percent of workers received wage cuts during this period — a rate higher than wage cuts observed during the Great Recession. While job losses were concentrated among low-wage workers, nominal wage cuts were concentrated among higher-wage workers. Over 15 percent of workers in the highest wage quintile received a wage cut between April and May.

The U.S. Labor Market during the Beginning of the Pandemic Recession