Declining Work Hours and the Rise in Young Men's Gaming 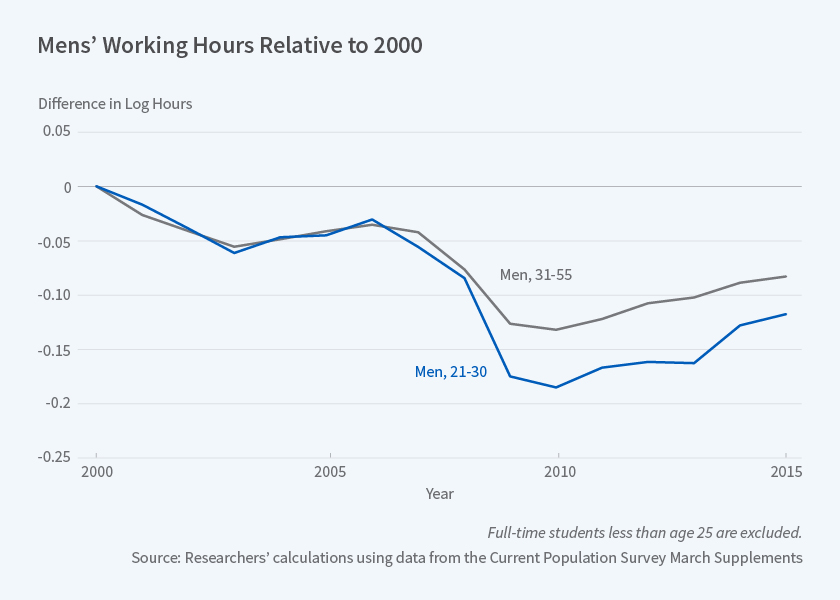 Increased leisure time and reduced labor supply of young men may be partly due to the improved quality of video games.

Technological improvements and reduced prices for online video games have increased the attractiveness of leisure time for young men and may be contributing to declining hours of work, according to the researchers of Leisure Luxuries and the Labor Supply of Young Men (NBER Working Paper No. 23552). They find that young men spend far more time playing online games than young women and older people of both genders.

Mark Aguiar, Mark Bils, Kerwin Kofi Charles, and Erik Hurst note that from 2000 through 2015, average hours of work for men ages 21-30 fell by 203 hours per year, compared to a fall of 163 hours for men aged 31-55. The declines for both groups started prior to last decade's Great Recession, but they accelerated during the severe downturn. Hours worked have rebounded only modestly during the recovery.

The researchers recognize that reductions in demand for workers in manufacturing and routine jobs may have contributed to the fall in wages and work hours for those without college degrees. But they observe that although the real wages of younger men have tracked those of older men, their hours worked have fallen more than those of their older male counterparts. The objective of the paper is to distinguish the increase in leisure due to improved leisure technology from increases in leisure due to other forces such as declining labor market prospects. The "demand for leisure" is the flip side of "the supply of labor."

There is precedent for technological improvements precipitating shifts in labor supply, as when improved household technologies in the 20th century led to increased participation in the labor force by women. The researchers investigate whether innovations in leisure technology, specifically recreational computing and video games, could have contributed to the work-hour and leisure-time disparities between younger men and other groups.

During the period 2004-15, approximately 60 percent of the 2.3 hours of increased leisure time per week for young men was spent playing video games, while younger women and older men and women spent negligible extra leisure time in this way. These data are drawn from the American Time Use Survey (ATUS). In all, young men's time playing video games increased by 99 hours per year from 2004 to 2015, a 50 percent increase.

The researchers document that time spent playing video games is very sensitive to total leisure time for younger men, but not for other demographic groups such as younger women or older men. They estimate that innovations to recreational computing and video games since 2004 can explain on the order of half the increase in leisure for younger men, and could explain a decline in work hours of 1.5 to 3.0 percent, or 30 to 60 hours per year.

The researchers also found other interesting trends in the young male population. They report an increase in the percentage of young men living with a close relative, from 23 percent in 2000 to 35 percent in 2015, suggesting that the young mens' lifestyles are being partially subsidized by others. At the same time, the self-reported overall happiness of young men has been increasing.

Leisure Luxuries and the Labor Supply of Young Men