Chance to Work with Emerging IT Helps Firms Recruit 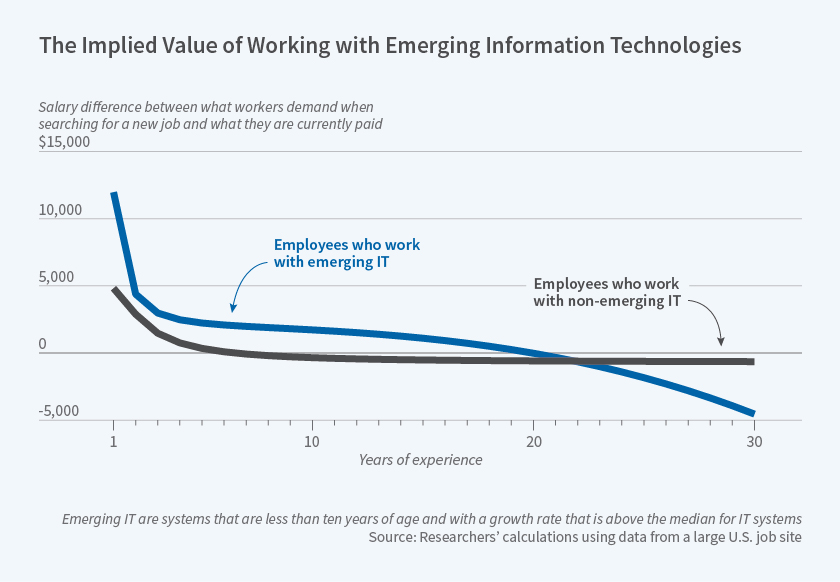 Companies that invest in cutting-edge technologies can engage labor at lower cost than less-advanced rivals, with added savings for firms that emphasize skills development.

Firms compete aggressively for IT workers. In Paying to Program? Engineering Brand and High-Tech Wages (NBER Working Paper 25552), Prasanna Tambe, Xuan Ye, and Peter Cappelli explore how investments in cutting-edge IT systems affect the recruitment and retention of IT workers.

Using data from a large U.S. jobs board and Glassdoor, an employer review website, the researchers created a detailed dataset on firm characteristics, including IT systems in use at the firm, and workers' current and target wages. (The latter serve as a proxy for reservation wages.) The researchers then test their hypothesis that workers may be willing to accept lower compensation in exchange for the opportunity to work with emerging IT systems, perhaps with the goal of acquiring valuable and in-demand skills that may advance their careers.

The data show that companies that invest in emerging IT systems can engage workers at 24 percent lower cost. The effect is larger, in the range of 5 percent lower cost, among employers that emphasize skill development. The researchers note that "this implies that workers who make $100,000 require an additional $5,000 to leave employment where they use new technologies."

Investments in emerging IT technologies, however, also come with a price. Workers who use these technologies leave their firms more quickly. In fact, within a given firm, those who use emerging technologies are as much as 20 percent more likely to exit than workers who do not. This suggests that workers are willing to exchange some amount of compensation in the relative short term for the chance to obtain valuable skills in the longer term. The researchers note that "[a]mong potential omitted variables, few lead workers to set higher target wages and exit the firm more quickly, except human capital."

The researchers find some heterogeneity in the effects they measure. Younger IT workers, for example, are more likely to value access to new systems. The effects are also stronger in markets where employers are actively seeking and hiring workers who know how to use emerging systems — in other words, in tight labor markets.

To substantiate further their hypothesis that workers value the opportunity to work with emerging technologies, the researchers also conduct a textual analysis of employer reviews at Glassdoor. They find a positive relationship between a firm's use of emerging technologies and IT workers "valuing technology and learning as sources of value derived from that employer." The relationship between use of emerging systems and employees valuing compensation, by contrast, is negative. At firms that use older, less-popular IT systems, employees primarily value compensation. Taken together, the evidence "supports the notion that IT workers value access to interesting IT systems above most other employer attributes."

The researchers conclude by noting several implications of their findings. First, showing that investments in IT can help employers attract higher-productivity workers may shed light on how and why those investments affect firm performance. Second, firms in markets without labor market mobility restrictions, such as those posed by non-compete agreements, may have more of an incentive to invest in emerging technology since "they can capture more of the value they provide to workers through this channel." Finally, the suggestion that workers of different experience levels value exposure to emerging systems differently "suggests that IT factors can influence how different age workers sort across firms, which may be important given the many diversity concerns that high-tech firms face."