New Insights on Past and Present Impacts of Automation 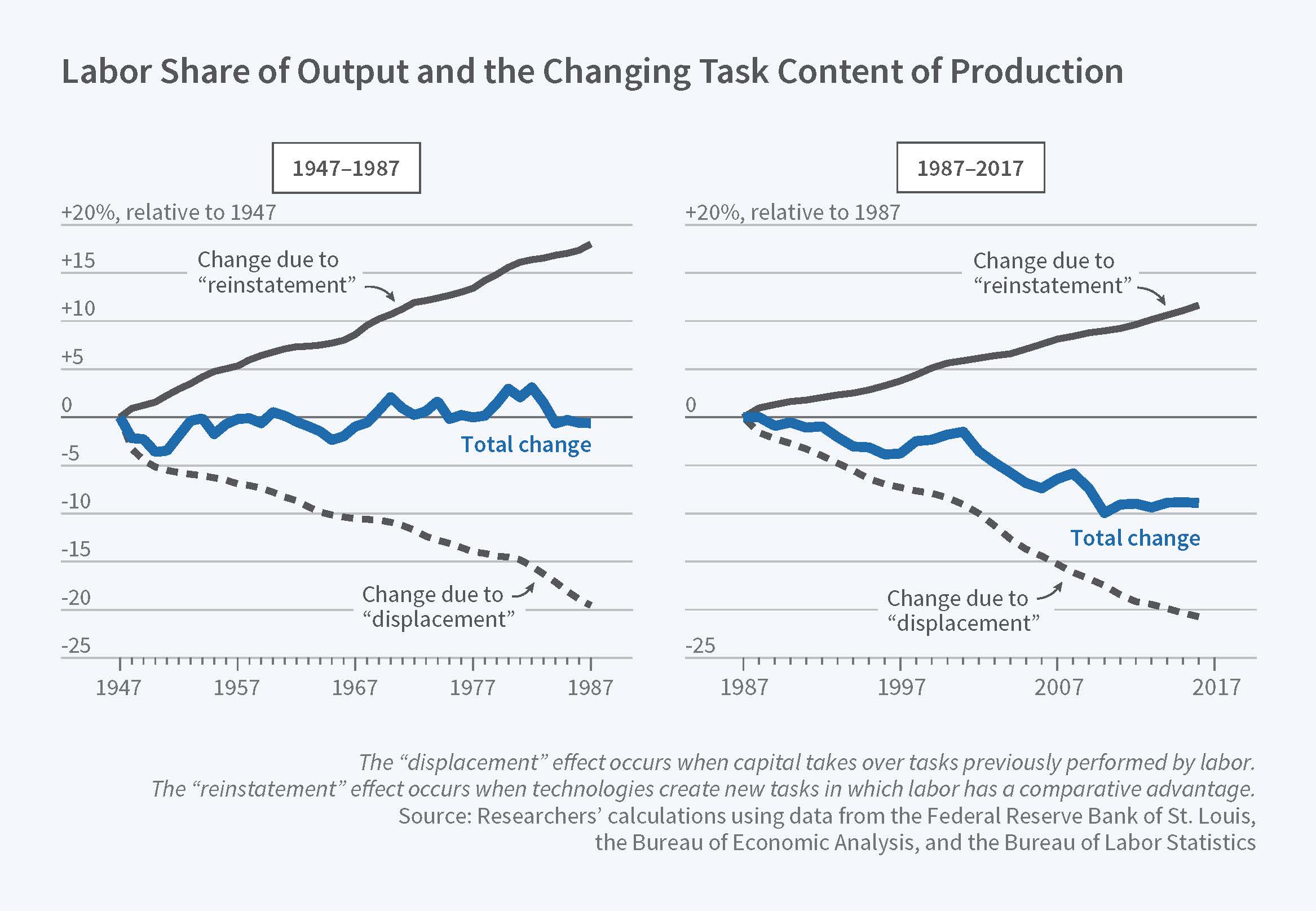 Rapid wage growth and a stable labor share of national income coincided with automation in the past because other technological changes counterbalanced its impact.

Whether automation is driving down the wages of middle-class workers, particularly those without college degrees, is a topic of great current interest as well as controversy. In Automation and New Tasks: How Technology Displaces and Reinstates Labor (NBER Working Paper No. 25684), Daron Acemoglu and Pascual Restrepo develop a conceptual framework for assessing the link between automation and the demand for labor and apply it to the post-World War II U.S. economy.

The researchers focus on how producers allocate tasks between capital and labor. For example, a company that produces and sells shirts must decide whether the many discrete tasks involved — such as design, knitting, processing, accounting, and sales — should be completed by humans or by human-operated machines, by software programs, or by industrial robots.

Automation has two competing effects on the demand for labor. A displacement effect — in which capital assumes tasks previously performed by humans — reduces labor demand, while a productivity effect — in which automation increases productivity and creates new tasks better suited for humans to execute — increases it. Automation always reduces labor's share of output. Whether it raises or lowers the demand for labor depends on the relative magnitude of these effects.

Technologies that produce displacement effects larger than their productivity effects will reduce the demand for labor and put downward pressure on wages, while those for which the productivity effect dominates will raise the demand for human labor. In addition, technological change also generates a "reinstatement effect," whereby new jobs for workers are created. For example, the internet, by enabling much more efficient searches for information, likely lowered overall demand for corporate librarians and related workers, but also generated jobs for search engine optimizers, web page designers, and related positions. The researchers conclude that in the past, the displacement effects of automation were largely offset by other, coincident developments that generated new tasks for labor.

Using this framework, the researchers analyze the economy-wide wage bill and study trends in overall demand for labor since World War II. Between 1947 and 1987, there were no significant changes in labor's share of value across the construction, services, manufacturing, and agricultural sectors. There were small declines in the mining and transportation industries. The per capita wage bill grew by 2.5 percent per year, largely driven by strong productivity. The displacement that took place during this time period was balanced by an equal-sized reinstatement effect.

Between 1987 and 2017, however, growth in the demand for labor slowed. The per capita wage bill grew only 1.33 percent per year and has been virtually stagnant since 2000. The researchers attribute this to a slowdown in productivity growth to about 1.54 percent per year, as well as a change in the task content of production. The displacement effect was significantly larger and the reinstatement effect was much smaller. The trend is particularly noticeable in manufacturing, where displacement reduced the demand for labor by approximately 30 percent between 1987 and 2017.

"[T]he deceleration of labor demand growth over the last 30 years is due to a combination of anemic productivity growth and adverse shifts in the task contents of production owing to rapid automation that is not being counterbalanced by the creation of new tasks," the researchers conclude.

Automation and New Tasks: How Technology Displaces and Reinstates Labor