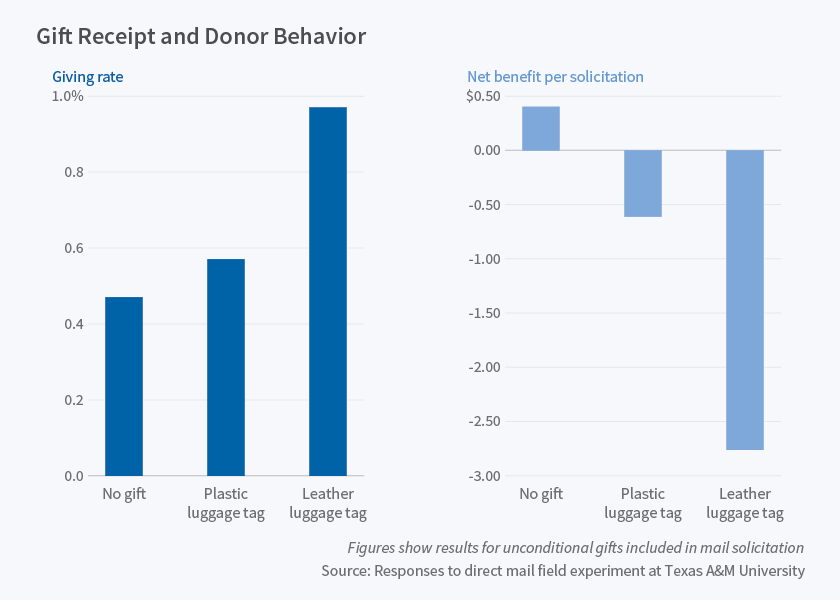 Researchers found higher likelihood of giving but no difference in donation size between the control group of potential donors that was not offered a gift and groups that were offered embossed luggage tags.

How do potential donors respond to receiving gifts from organizations that appeal to them for support? That's the central question in It's Not the Thought That Counts: A Field Experiment on Gift Exchange and Giving at a Public University (NBER Working Paper 22867).

Researchers Catherine C. Eckel, David H. Herberich, and Jonathan Meer investigate whether gifts to donors raise giving by more than they cost. Their findings indicate that gifting, at least on a relatively small scale, does not pay off.

Previous experiments suggested that gifts are more appealing to donors if they can be used to indicate an affiliation with a prestigious or significant organization. With that in mind, the researchers partnered with an alumni association, the Association of Former Students (AFS) at Texas A&M University, and used luggage tags branded with the association's logo as rewards.

In a direct mail appeal, the researchers contacted 140,642 Texas A&M alumni who had not donated the prior year or had recently graduated. Seven different treatments were used in the mailings to measure responses to requests for donations. Some solicitations included what the study terms an "unconditional" gift which came with the request for a donation and required no response. Some unconditional gift recipients received a leather luggage tag and some a plastic one, to enable researchers to evaluate the impact of a gift's quality on potential donors. Other treatments offered a "conditional" gift of a plastic tag which would sent if a donation were made. As a control, some mailings neither contained nor offered gifts. Noting that a significant number of subjects in previous studies had claimed they wished charities would save money on overhead by not offering gifts, the researchers offered opt-in and opt-out choices in some of the conditional mailings. In addition, some envelopes had the text "special offer" displayed on the front.

The most surprising finding was that nearly two-thirds of those who donated to the appeal and were offered a gift opted to accept it. "This provides evidence that donors are not motivated by the desire to maximize the impact of their donation, which could be thought of as a more altruistic motivation," the researchers conclude. "Rather, the motivation appears to be, at least in part, a desire for the item itself, whether for its direct value or the signaling value of an AFS-branded tag."

Most significantly for organizations planning donor appeals, the researchers found that there was no difference in donation size between the control group and the group that was offered a luggage tag if they sent in a donation. Donations were higher when the luggage tag was included in the initial mailing as an unconditional gift. The quality of the gift also had an impact on donations; the leather unconditional gifts were associated with a higher likelihood of donations being made than the plastic unconditional gifts.

It's Not the Thought that Counts: A Field Experiment on Gift Exchange and Giving at a Public University