The Link between High Employment and Labor Market Fluidity 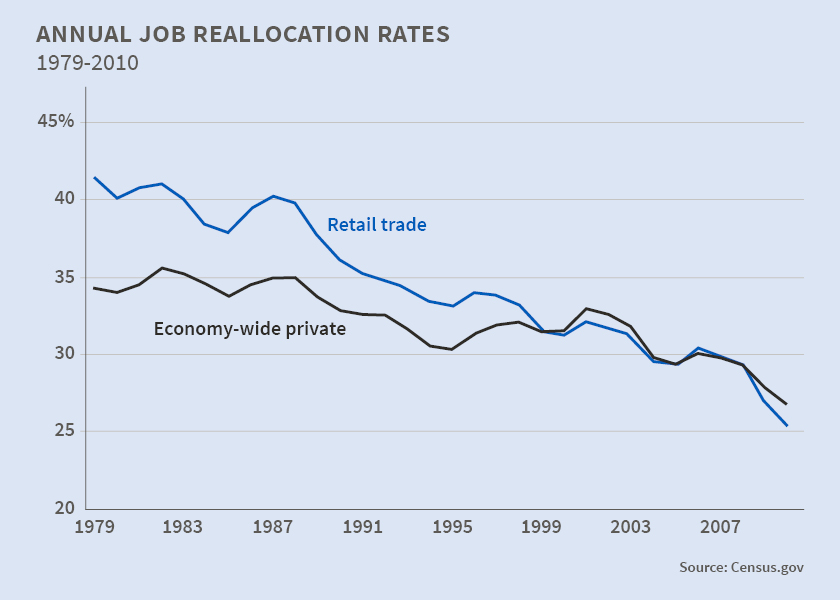 U.S. labor markets lost much of their fluidity well before the onset of the Great Recession, according to Labor Market Fluidity and Economic Performance (NBER Working Paper No. 20479). The economy's ability to move jobs quickly from shrinking firms to young, growing enterprises slowed after 1990. Job reallocation rates fell by more than a quarter. After 2000, the volume of hiring and firing - known as the worker reallocation rate - also dropped. The decline was broad-based, affecting multiple industries, states, and demographic groups. The groups that suffered the most were the less-educated and the young, particularly young men.

Many factors contributed to the decline in job and worker reallocation rates, among them a shift to older companies, an aging workforce, changing business models and supply chains, the effects of the information revolution on hiring, and government policies.

About a quarter of the decline in job reallocation can be explained by the decline in the formation of young firms in the U.S. From the early 1980s and until about 2000, retail and services accounted for most of the decline in job reallocation. This occurred even though jobs shifted away from manufacturing and toward retail, where job creation is normally more dynamic and worker turnover more pronounced. One reason for the slowdown in turnover was the growing importance of big box chains in the retail sector. The authors note that other studies find that jobs are more durable in larger retail firms, and their workers are more productive than workers at the smaller stores these retailers replaced.

Fewer layoffs and more employment stability are generally considered positive trends and natural outgrowths of an aging workforce. The flip side of this equation, however, is that slower job and worker reallocation mean slower creation of new jobs, putting the jobless, including young people, at a heightened risk of long-term unemployment. These developments also slow job advancement and career changes, which are associated with boosts in wages.

This is of particular significance since 2000, when the concentration of declines in job reallocation rates and the employment share of young firms shifted from the retail sector to high-tech industries.

"These developments raise concerns about productivity growth, which has close links to creative destruction and factor reallocation in prominent theories of innovation and growth and in many empirical studies," the authors write.

Government regulation also played a role in slowing job and worker reallocation rates. In 1950, under five percent of workers required a government license to hold their job; by 2008, the percentage had risen to 29 percent. Add in government certification and the share rises to 38 percent. Wrongful discharge laws make it harder to fire employees. Federal and state laws protect classes of workers based on race, religion, gender, and other attributes. Minimum-wage laws and the heightened importance of employer-provided health insurance also make job changes less frequent.

The authors study the effects of the decline in job and worker reallocation rates on employment rates by gender, education, and age, using state-level data. They find that states with especially large declines in labor market fluidity also experienced the largest declines in employment rates, with young and less-educated persons the most adversely affected.

"...if our assessment is correct," the authors conclude, "the United States is unlikely to return to sustained high employment rates without restoring labor market fluidity."