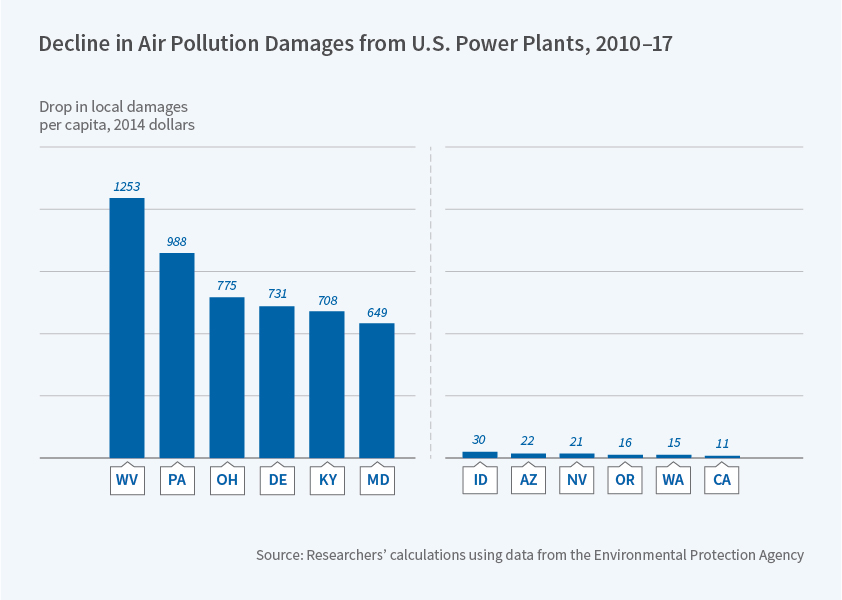 Annual damages from air pollution produced by U.S. power plants fell from $245 billion in 2010 to $133 billion in 2017, a 46 percent reduction, according to research reported by Stephen P. Holland, Erin T. Mansur, Nicholas Z. Muller, and Andrew J. Yates in Decompositions and Policy Consequences of an Extraordinary Decline in Air Pollution from Electricity Generation (NBER Working Paper 25339).

Most of the decline in damages is due to reduced sulfur dioxide emissions, decreased generation from coal-fired power plants, and changes in power plants in the East. Per person, damages declined by about $1,000 for residents in West Virginia, Pennsylvania, and Ohio. The reductions in pollution damages between 2010 and 2017 were greater in poorer areas. The researchers estimate that average damages decreased from about $600 to $200 per capita for individuals in the lowest-income decile, and from about $450 to $150 for those in the highest decile.

The study highlights four avenues through which the net $112 billion reduction in damages occurred. Reduction in emissions per power plant, mostly due to the installation of emissions control technologies, accounted for $63 billion of the total decline. Shifting power generation from dirtier (coal) plants to cleaner (natural gas) plants explained $60 billion of the decline. For example, shifts away from fossil-fuel-based generation towards renewable generation reduced damages by $25 billion. In opposition to these declines, the damage costs per unit of emissions increased damages by $35 billion. This increase was due to a combination of population growth and demographic changes, atmospheric changes, and a rising social cost of carbon.

The researchers use their findings to quantify the potential implications for policy. They estimate that over this seven-year period, marginal damages decreased from 8.6¢ per kilowatt hour (kWh) to 6.0¢ per kWh in the East. However, marginal damages in the West and Texas increased slightly. These numbers are then used to calculate the benefits of electric cars and household solar panel adoption. They find that, in 2010, the average electric car had a higher annual pollution cost, by about $81, than a gasoline-fueled car. By 2017, the average electric car was cleaner by $72. Household solar panels, meanwhile, had an annual environmental benefit of $356 in 2017, down slightly from $418 in 2010. The averages mask the substantial geographic variation.

Government subsidies have encouraged Americans to put solar panels on more than 1 million rooftops and soon they'll deploy panels on 1 million more. There are substantial differences across states in the incentives to install solar generation systems. These incentives, however, are not well aligned with the potential benefits of renewable generation, as Steven E. Sexton, A. Justin Kirkpatrick, Robert Harris, and Nicholas Z. Muller calculate in Heterogeneous Environmental and Grid Benefits from Rooftop Solar and the Costs of Inefficient Siting Decisions (NBER Working Paper 25241). 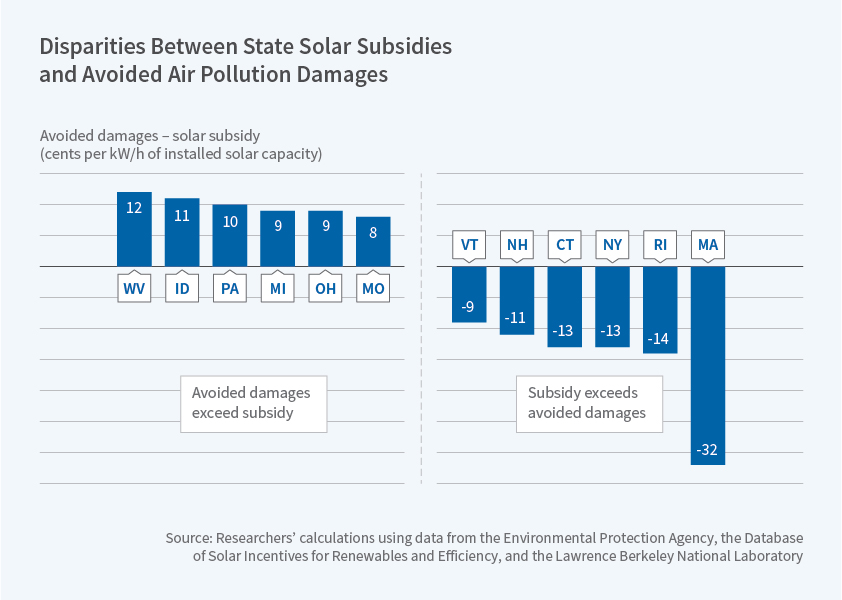 Most rooftop solar systems are located in the West. However, because of differences in the sources of electricity generation, the greatest pollution avoidance from switching to solar from conventional power is in the Midwest and the Mid-Atlantic states. In California, which has pushed rooftop solar as a way to alleviate congestion on the grid and lower carbon emissions, the environmental benefits are modest at best. "If installed solar capacity could be costlessly reallocated across states, annual total capacity benefits would increase by as much as $1.3 billion, reflecting predominantly gains in environmental benefits," the researchers conclude.

Benefits also vary widely within states. The study estimates that a rooftop solar array in Maynard, Massachusetts, a western suburb of Boston, delivers only a $61 annual environmental benefit, while one in Bloxom, Virginia, on the Chesapeake Bay, delivers a $1,224 benefit. A major reason for this difference is the type of energy that solar is displacing. If it's coal-fired energy, as in Bloxom, the environmental benefits are much greater than when solar displaces generation from natural gas, as in Maynard. Putting the energy value and environmental benefits together, the researchers find that the Midwest and Mid-Atlantic states would benefit most from more solar capacity, while the West would benefit least. The present value of a 4-kilowatt solar system is $15,000 more if it's installed in Maryland than in Oregon, but the West Coast remains home to two-thirds of the nation's rooftop solar arrays.