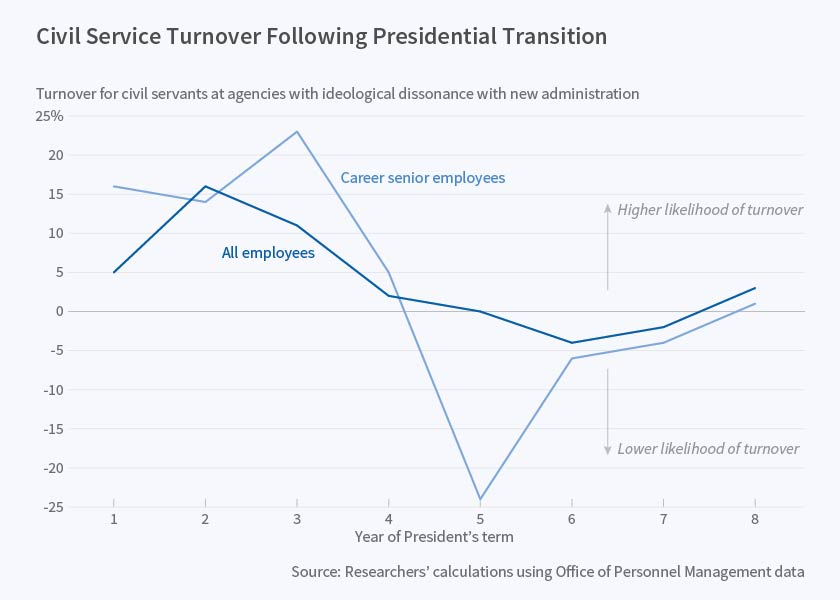 Turnover rates for career federal employees are higher in the first few years of a new administration than at other times, particularly among senior executives.

When a new administration comes to town, it's not just the old President and his political appointees who leave—many senior career federal employees go too. That's especially true for those who work in agencies whose existing policies clash with those expected of the new President, according to Elections, Ideology, and Turnover in the U.S. Federal Government (NBER Working Paper 22932). The findings challenge the view that civil service bureaucrats provide stability and continuity for government operations as elected leaders come and go.

Using Office of Personnel Management records of 3.5 million federal employees between 1988 to 2011, spanning four presidential transitions, Alexander Bolton, John M. de Figueiredo, and David E. Lewis find that turnover rates for career federal employees are higher in the first few years of a new administration than at other times.

The increase in the turnover rate after the start of a new administration is most pronounced for career senior executives. This rate increases by 20 percent (1.6 percentage points) over the rate in other years. Supervisory employees also are more likely to leave after a new administration takes office, but their turnover rate only rises by 3.6 percent (0.2 percentage points) for the first post-election year.

"To put this in perspective, this would mean the departure of an additional 528 supervisors and 100 members of Senior Executive Service (SES) per year," the researchers report. "These are officials at the very highest levels of government," filling roles such as the Director of Counterintelligence at the Department of Homeland Security and the Director of Ground and Drinking Water at the Environmental Protection Agency (EPA).

The study also finds that in contrast to the turnover patterns for senior civil servants, lower-level government executives are less likely to leave in the first year of a new presidency than in other years.

"With high levels of churn in the career SES during the beginning of a new administration, there may be new opportunities for promotion for individuals directly below the Senior Executive Service level, leading General Schedule 13-15 employees to stay in the government to vie for these new openings," the researchers say.

Over the first three years of a new administration's term, although turnover declines for lower-level civil servants overall, it rises for those who work for agencies that appear to exhibit ideological clashes with the new administration's point of view. The researchers use expert ratings of agency ideology to develop a measure of the congruence between the agency's mission and the president's agenda. Agencies such as the EPA and the Department of Labor are considered in dissonance with the agenda of Republicans while agencies such as the Department of Defense are considered unaligned with Democrats. For employees at such agencies, the increase in turnover is highest for the SES civil servants, ranging from an additional 13 percent to 23 percent (1.1 to 1.8 percentage point) annual turnover in the first three years, or the loss of an additional 300 SES employees in ideologically separated agencies. The ideological effect is smaller for all employees, ranging from 5 percent to 16 percent (0.3 to 1.0 percentage point).

"This effect is particularly large in the first three years of an administration and for the group of employees that has the most direct contact with the administration—career senior executives," the researchers find. "This suggests that political disagreements can lead to churn at the top of the career civil service... . In this way, elections and partisan changes can have important impacts on the career concerns of federal employees and potentially affect the capacity of organizations."

The researchers find that the period of elevated turnover lasts for about three years. After five years, at the start of a second term, the effect actually reverses, and the turnover rate is noticeably lower for career civil servants in those years relative to all others. Civil servants who have remained through a President's first term are particularly unlikely to leave when that President wins reelection. The researchers note this pattern, and write that "though our theory does not shed light on this result, it could suggest that, in some cases, career employees are more empowered by political appointees the longer they remain with an administration."

Elections, Ideology, and Turnover in the U.S. Federal Government