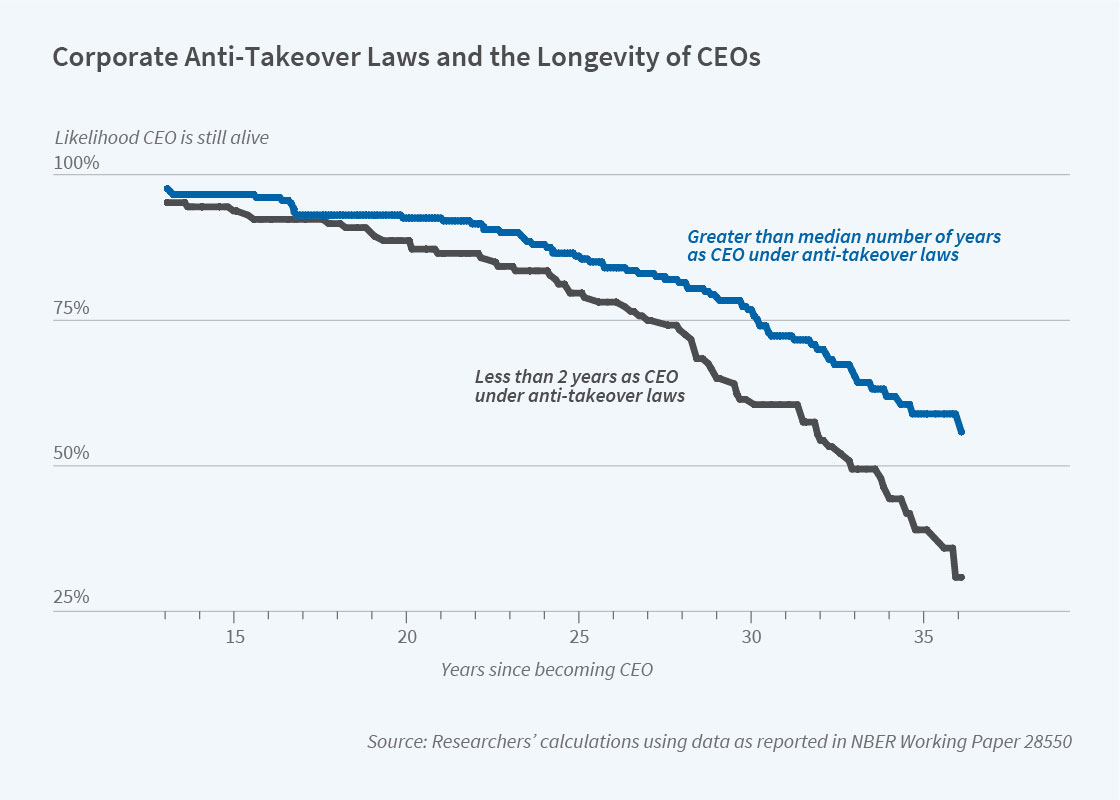 CEOs of firms that are more subject to risk of hostile takeover and experience industry distress appear to age faster, and to die younger, than those in less stressful circumstances.

How does work-related stress affect health outcomes? To explore this much-discussed issue, Mark Borgschulte, Marius Guenzel, Canyao Liu, and Ulrike Malmendier analyze the experiences of 1,605 CEOs who entered the C-suite between 1975 and 1991. The CEOs in the study — CEO Stress, Aging, and Death (NBER Working Paper 28550) — led large, publicly listed US firms. The researchers chose to study CEOs, as opposed to other workers, because CEOs are unlikely to be affected by financial hardships, so the health effects of work-related stress can be separated from those of financial stress. They examine two sources of stress: the risk of a hostile takeover, and the challenges of a financial downturn.

To study the stresses associated with takeover risk, they examine the enactment of state anti-takeover laws and, in particular, business combination (BC) statutes. Thirty-three states enacted BC laws between 1985 and 1997. These laws made hostile takeovers more difficult, thereby reducing the extent to which market discipline created job stresses for CEOs. Building on existing literature, the researchers argue that these laws constituted a significant shift in CEOs’ perceptions of their work environment.

The median CEO in the sample served for 4.4 years under a BC law regime, conditional on BC exposure. Working for more years with anti-takeover protection was associated with longer CEO life expectancy. Working an additional year in a legal environment with greater takeover protection lowered the annual mortality rate by about 5 percent for a typical CEO, increasing his or her lifespan by just over two years. The mortality reduction seemed driven by the initial years of BC law exposure, perhaps because CEOs adapted to the new environment and, after a few years, had exhausted most of the opportunities for modifying their activities.

The researchers also study how industry-wide distress — defined as a 30 percent drop in the stock price of the median firm in the industry, persisting for at least two years — affects CEO longevity. Forty percent — 648 out of 1,605 CEOs in the sample — experienced at least one period of industry distress. Fewer than 20 percent experienced two or more shocks, and fewer than one in ten faced three or more shocks. CEOs who were in office during industry-wide distress, on average, died 1.4 years earlier than those who did not experience such shocks. This effect is smaller than the estimated effect of BC laws, perhaps because the latter apply to much longer periods.

The study also considers stress associated with the 2008 financial crisis. The researchers analyze the evolution of the “apparent age” of corporate leaders (how old they look), comparing those who led firms that were hard-hit by the crisis with those at firms that were less affected. They measured CEOs’ “apparent age” using visual machine-learning software, which was applied to about 3,000 pre- and post-crisis facial images of a recent CEO sample consisting of the 2006 Fortune 500 CEOs. Prior to the financial crisis, the software generally returned estimates of apparent age that did not systematically vary depending on whether CEOs would subsequently be hit hard by the crisis. During and after the crisis, however, there was a substantial increase in the “apparent aging” of CEOs leading firms in distressed industries compared with other CEOs. The apparent age of CEOs in industries that suffered the most during the crisis rose by about 1.2 years more than that of the CEOs in non-distressed businesses.

The researchers conclude that “stricter governance and economic downturns constitute a substantial personal cost for CEOs in terms of their health and life expectancy.”