An Unintended Consequence of Limiting FX Borrowing by Banks 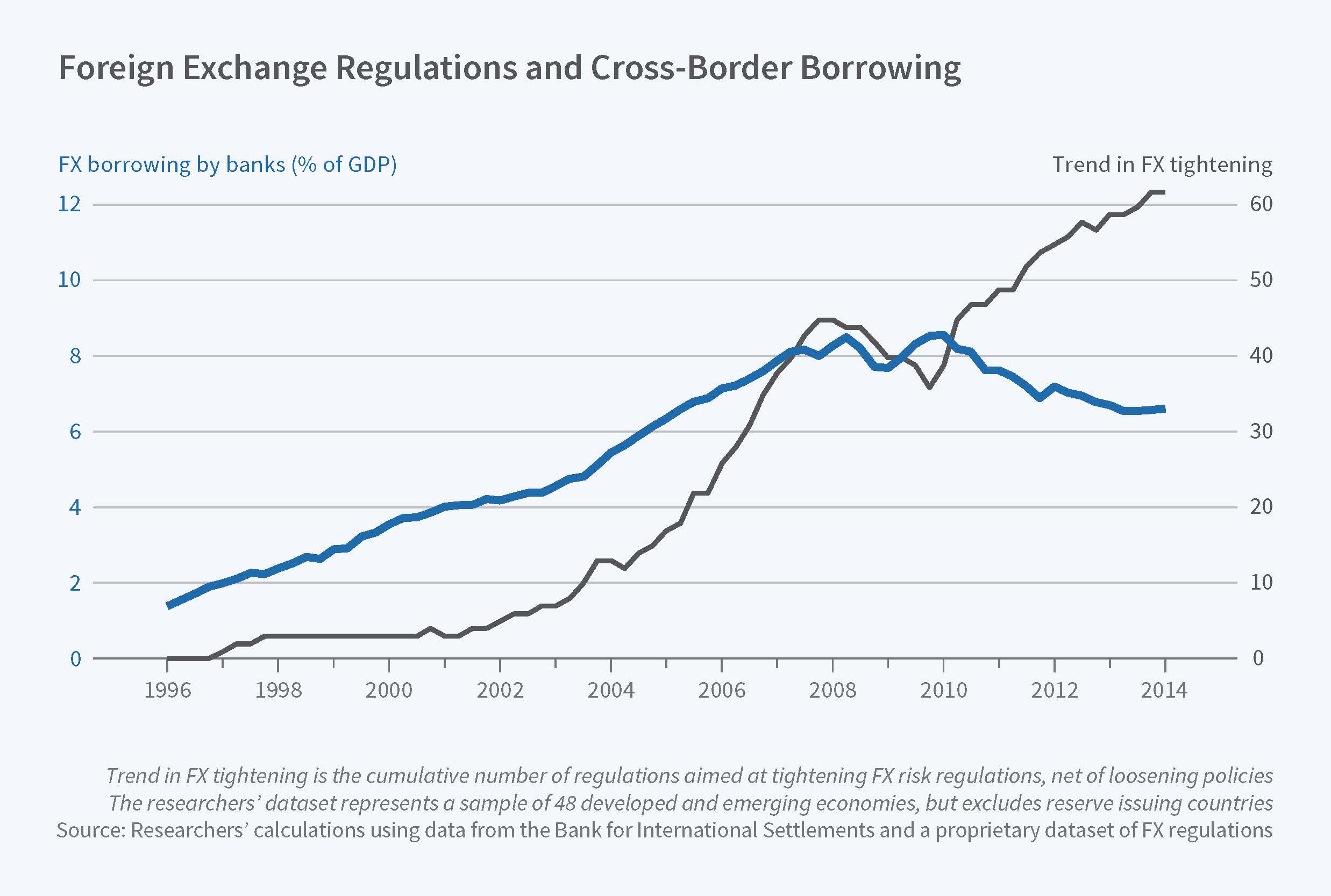 Regulators have worried about both banks and companies — especially in emerging markets — incurring debt denominated in foreign currency. Yet, the practice keeps expanding. Between 2009 and 2015, cross-border foreign exchange (FX) borrowing, consisting of international debt securities and loans, rose by about U.S. $2.5 trillion.

Bank regulators can use a range of macroprudential policies to discourage banks from borrowing in foreign currency, thereby reducing the banking sector's vulnerability to exchange rate fluctuations. But such regulations on banks have the unintended effect of causing firms to shift to other sources for their FX borrowing, according to findings in Macroprudential FX Regulations: Shifting the Snowbanks of FX Vulnerability? (NBER Working Paper No. 25083). This shift does not eliminate the gains in terms of a more secure banking sector, but it does shift the risk of foreign-currency-denominated debt elsewhere in the economy.

"When the snowplow moves the snow off the road, it makes the road system safer," conclude researchers Toni Ahnert, Kristin Forbes, Christian Friedrich, and Dennis Reinhardt. "Yet, just as the snow plow inevitably pushes a portion of the snow to block your driveway, macroprudential FX regulations can also shift some vulnerability to other sectors that are outside the regulatory perimeter. These other institutions may be harder to monitor and less well informed than banks, less able to screen for the risks inherent in corporate borrowing in FX, and less able to handle subsequent losses after a depreciation."

Borrowing in foreign currency is often preferred, as it is cheaper than borrowing in local currency. One downside to such borrowing, however, is that it carries exchange-rate risk. When a local currency depreciates against the foreign currency in which debts are denominated, the bank or company must pay more to service its debt. Severe depreciation could precipitate a default. Macroprudential rules that are designed to discourage FX borrowing by banks make such borrowing more expensive, and lead to less borrowing of this sort. The end result should be an economy less sensitive to exchange rate fluctuations.

The researchers report that tighter FX borrowing rules lead banks to cut such borrowing by about one third, on average. That amounts to an average debt reduction of between 0.5 and 0.7 percent of GDP. Effects of these regulations are even larger in major emerging markets such as Indonesia or Brazil, where FX borrowing appears to fall by about half in response to such regulations.

In the face of such regulations, corporations, which are now unable to borrow in FX from local banks, increase their FX borrowing from other sources (such as through issuing bonds) by about 10 percent. This effect is also large — as much as a 20 percent increase — in major emerging markets. The researchers draw this conclusion by analyzing data from 48 nations over the period 1995 to 2014. They caution that not all FX transactions are captured in their data, such as those that occur through a third country, and that it is possible that exchange rate hedging reduces the corporation's vulnerability. They nevertheless conclude that the corporate response weakens, to some extent, the regulatory guardrails against financial disruption from exchange rate fluctuations that the financial authorities have tried to install. They note that macroprudential FX controls could provide an alternative to capital controls for countries concerned about excessive borrowing in foreign currency.