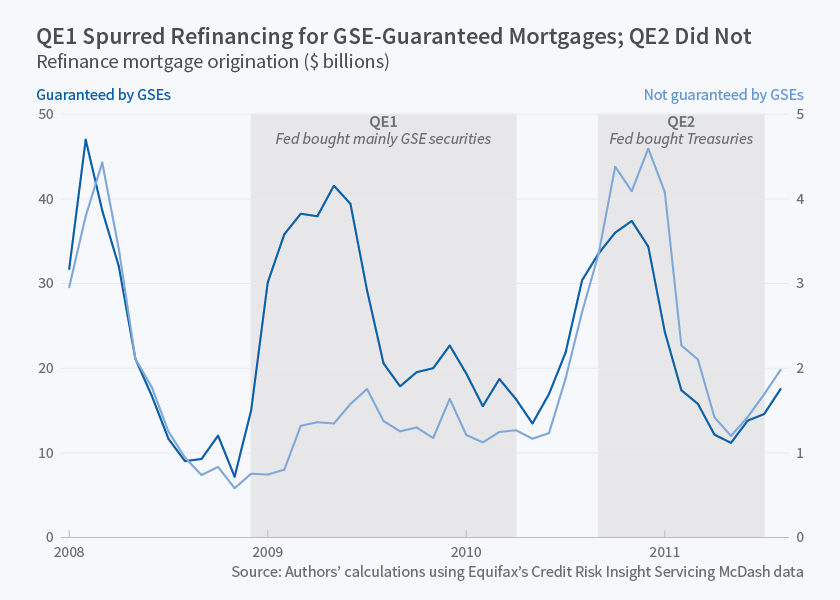 The first phase of quantitative easing in the U.S. made credit more easily available, lowered interest rates, and stimulated over $600 billion in refinancing activity and $76 billion in additional consumption.

Central banks seeking to stimulate economic activity in the aftermath of the Great Recession have purchased a range of financial assets, including mortgages and corporate bonds. How such purchase programs operate, and whether they produce the desired result, is the subject of vigorous debate.

In How Quantitative Easing Works: Evidence on the Refinancing Channel (NBER Working Paper 22638), Marco Di Maggio, Amir Kermani, and Christopher Palmer find that the Federal Reserve's purchase of $1.25 trillion in qualifying mortgage bonds between late 2008 and the first quarter of 2010 stimulated over $600 billion in refinancing activity by making credit more easily available and by lowering interest rates. They estimate that the combination of lower interest payments and equity extraction by homeowners who refinanced their homes created $76 billion in additional consumption.

Government sponsored enterprises (GSEs) such as Fannie Mae and Freddie Mac guarantee mortgages that meet certain criteria for maximum loan sizes and loan-to-value (LTV) ratios. Loans that qualify for a guarantee are called conforming loans. U.S. law restricts Federal Reserve mortgage purchases to guaranteed loans, which heightens the segmentation of the markets for conforming and non-conforming mortgages when financial intermediaries are unable to rebalance across segments.

The researchers estimate differences in interest rates and mortgage origination volumes in the conforming and non-conforming mortgage markets (including both "jumbo" mortgages that exceed conforming loan limits and other non-conforming loans that have over 80 percent LTV ratios) during Federal Reserve market interventions from 2008 through 2014. They study 2006-13 data from the credit bureau Equifax, merging processing data and credit data from over 30 million loans, or roughly 65 percent of the mortgage market.

The researchers conclude that the effects of Federal Reserve mortgage purchases were strongest in the conforming loan market, where they were "effective at inducing new debt origination and cheaper monthly payments for households." However, the limited spillovers from QE1 suggest that because of strong segmentation when the banking sector is in distress, asset purchase programs primarily affect the market segments in which these purchases occur. The researchers estimate that loosening of GSE loan-to-value caps from 80 to 90 percent could have increased QE1's impact by 20 percent, thereby underscoring the way in which macroprudential policy can enhance or weaken the effects of unconventional monetary policy.

How Quantitative Easing Works: Evidence on the Refinancing Channel