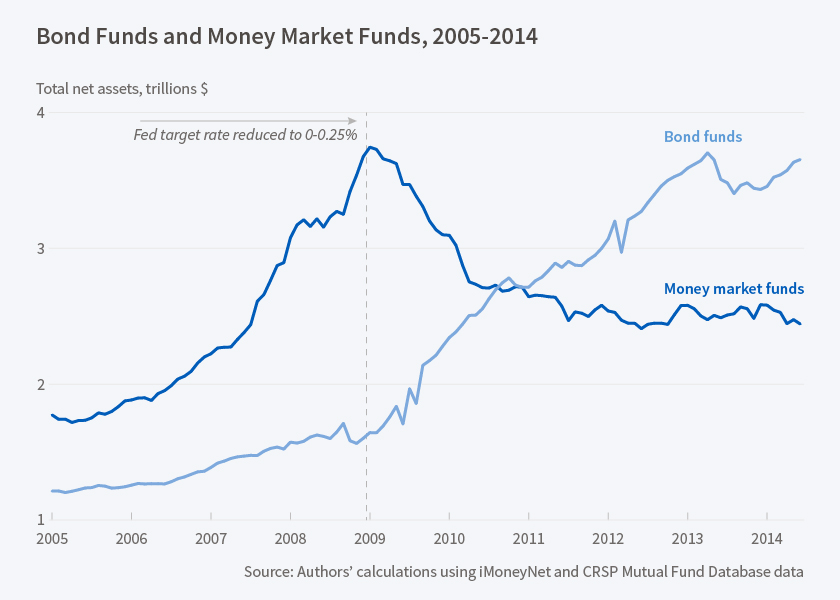 The Federal Reserve's ultra-low interest rate policy has had important effects on money market funds (MMFs) and on the asset management industry more generally. Zero and near-zero rates have reduced the profitability of MMFs. Almost universally, these funds have reduced investor fees in an attempt to deliver more return for their customers, Marco Di Maggio and Marcin Kacperczyk report in The Unintended Consequences of the Zero Lower Bound Policy (NBER Working Paper 22351). Many MMFs have moved into riskier assets, and some have exited the market.

Fund closures have broad implications. Within the asset management industry, they force a reallocation of resources within mutual fund families to other funds, particularly bond funds. More broadly, companies that traditionally borrow through the assets held by money market funds find it more difficult to raise capital, at least for a time.

The researchers study the responses of MMFs to five Federal Open Market Committee announcements which signaled that the target rate would be kept near zero for some time. Almost all MMF managers significantly trimmed the fees they charged investors. This subsidy averaged a not-insignificant $27 million per fund, for a total of some $7.3 billion. On average, MMFs also took on more risk. Independent funds—those unaffiliated with a bank or insurance company—were more likely to take on additional risk to improve the yield. Fund families with a higher-than-average percentage of their assets in MMFs were more likely to take on risk and less likely to exit. By contrast, funds affiliated with a bank or insurance company were more likely to exit than to take on more risk.

Fund families that shut down their MMFs were significantly more likely to open new bond funds than those families that did not close their MMFs. These fund families typically assigned their managers to other MMFs or to bond funds. The study finds that the changes within the MMF industry ripple out to the broader economy, at least temporarily. For example, the researchers found that six months after an MMF closed, the leverage of nonfinancial firms whose debt had been held by the now-closed fund was significantly reduced in comparison to similar firms that had borrowed from still-active MMFs. By a year after fund closure, however, these effects were no longer evident.

The researchers conclude that their "results highlight an important channel for transmission of monetary policy that has been completely overlooked by the academic literature, but one that is extremely relevant for practitioners and policy makers."

The Unintended Consequences of the Zero Lower Bound Policy