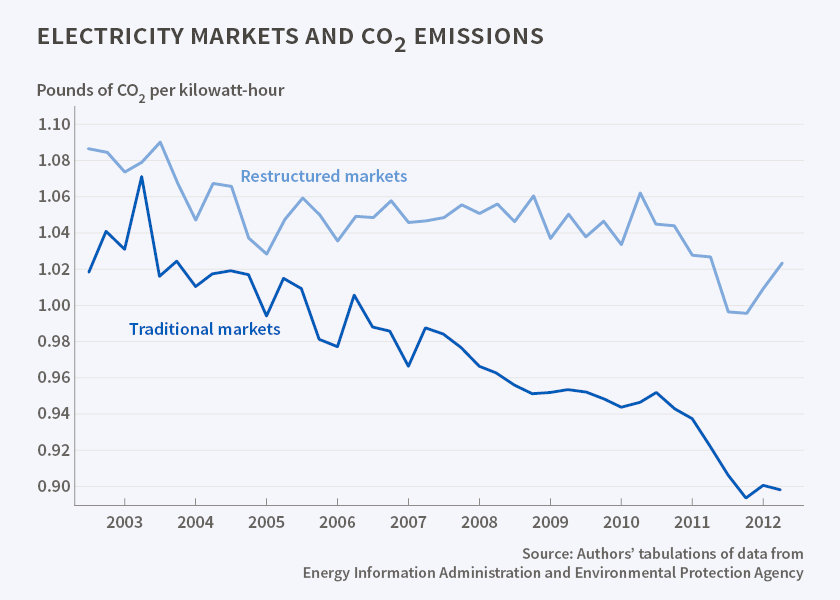 The shale gas boom has brought a much greater reduction of emissions to electricity markets not affected by restruc-turing than to restructured markets.

In many parts of the United States, the electricity market was restructured in the 1990s and early 2000s in an effort to increase competition by breaking up regional monopolies. But an unforeseen side effect of this restructuring has emerged, Christopher R. Knittel, Konstantinos Metaxoglou, and Andre Trindade report in Natural Gas Prices and Coal Displacement: Evidence from Electricity Markets (NBER Working Paper No. 21627). Utilities operating in markets that were not restructured were more likely to take advantage of the past decade's falling natural gas prices, and they are reducing carbon emissions more than utilities operating in markets that were restructured.

For more than a century, fossil fuels – particularly coal – have been the primary energy source for electricity generators. Early in the last decade, coal-fired plants were producing about 51 percent of the total electricity generated in the United States, while natural gas-fired plants accounted for 17 percent. But the burning of fossil fuels – and of coal in particular – emits large amounts of carbon pollutants linked by researchers to global climate change. This has prompted public demands and policy moves by government to reduce carbon emissions from power plants, especially from coal-fired plants.

Wholesale electricity markets have also undergone a transition in another dimension. To encourage greater competition, federal regulators in the 1990s and early 2000s embarked on a sweeping program to restructure the nation's electricity markets. Historically, regional utilities dominated several functions of the electricity industry: generating the power, transmitting it through regional networks, and distributing it to local household and business customers. The restructuring movement effectively unbundled those functions, creating a new wholesale market in which power plants were separately owned and operated by independent power producers (IPPs) within new regional markets overseen by independent system operators (ISOs). Electricity markets in some regions of the country never underwent restructuring. There, traditional investor-owned utilities (IOUs) with control of electricity supply from generation through distribution remain in place.

The researchers set out to explore the environmental impact of the recent natural gas glut and subsequent plunge in prices caused by the shale-gas boom in the United States. Using data from the Energy Information Administration, a division of the U.S. Department of Energy, the Environmental Protection Agency, the Federal Energy Regulatory Commission, and other sources, they sought to quantify short-term coal-to-gas switching decisions by different types of electric power plants in response to changes in the relative price of coal and natural gas from 2003, just prior to the shale-gas boom, to 2012, when the boom was fully underway. In particular, they wanted to analyze the reactions by investor-owned utilities operating in traditional markets, investor-owned utilities operating in restructured markets, and independent power producers.

The authors say one plausible explanation for the different reactions is that the restructuring process appears to have reduced the incentives of ISO market participants to invest in natural gas capacity, which limits their ability to respond to changes in the relative price of the two fuels. The authors present empirical evidence that the investment rate in natural gas generation was higher in traditional markets, compared to restructured markets.

The heterogeneity in generators' responses of fuel consumption to fuel price has material implication for carbon dioxide emissions. The nearly 70 percent drop in the price of natural gas between June 2008 and the end of 2012 translated into as much as 33 percent reduction in carbon emissions for investor-owned utilities in traditional markets, but only up to 19 percent for investor-owned utilities in restructured markets.