Riches to Rags and Back Again: The Impact of China's Revolutions 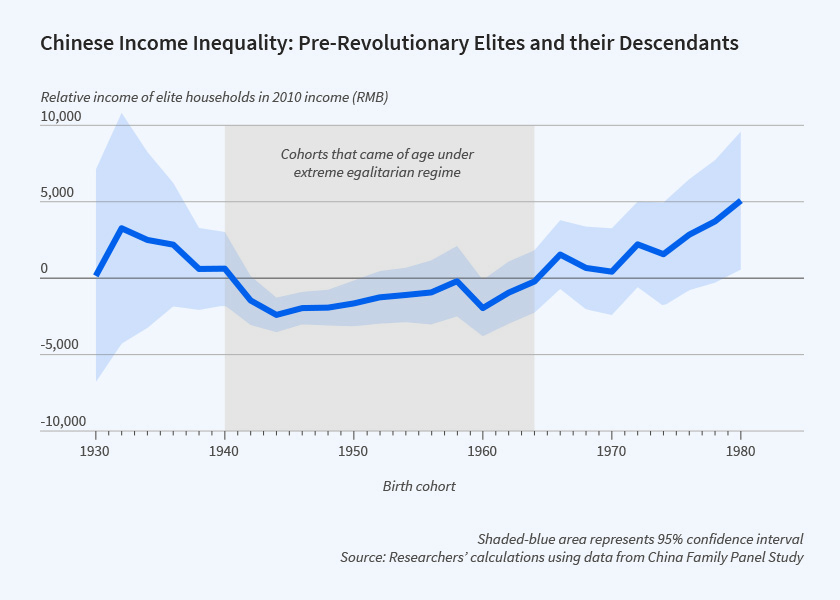 One of the most extreme attempts in history to eliminate advantages of the elite and eradicate economic and educational inequality succeeded only in the short term.

Guangyu Huang's grandfather was a rich landlord in Guangdong, China, who lost most of his land and assets during the Communist Revolution of the 1950s. Huang's father, who grew up in the midst of that revolution and the Cultural Revolution that followed in 1966–76, received no inheritance, had no formal education, and eked out a living extracting persimmon oil. Huang spent his childhood collecting trash to survive, then won admission to a prestigious university and founded GOME Electronics. Today he is one of the richest men in China.

Huang's story is both an inspiring rags-to-riches tale and an example of the persistent multigenerational transfer of values and attitudes that enable the accumulation of wealth, Alberto F. Alesina, Marlon Seror, David Y. Yang, Yang You, and Weihong Zeng argue in Persistence through Revolutions (NBER Working Paper 27053). The researchers investigate whether the Communist Revolution and Cultural Revolution, during which land and assets were redistributed and higher education was suspended in an effort to permanently eliminate inequality, succeeded in putting all citizens on an equal footing, and whether the effect of the revolutions persisted after China adopted market-oriented reforms and accepted greater inequality.

Using archival data on land holdings as well as census and survey data, they first confirm that China's revolutions initially succeeded in largely eradicating inequality. They find that the Communist Revolution eliminated wide disparities in landholding as well as educational inequality. Prior to the revolutions, elite citizens (those from households of landlords and rich peasants) were more than twice as likely to have finished secondary school; after the reforms, the children of formerly elite households obtained less education than their non-elite peers. Similarly, the children of formerly elite households went on to earn 18 percent less annually than the children of non-elite families.

But while the revolutions eliminated inequality among the children of households that were elite before the reforms, a different narrative emerges in the next generation — the grandchildren of formerly elite families. These individuals, who grew up with a different set of institutions that accept greater inequality, perform better on math evaluations and complete more education — about 10 percent more years of school — than the grandchildren of non-elites. They also earn more money, about 16 percent more a year. Intergenerational mobility in China today is roughly on par with, if not slightly higher than, that in the US and Canada. The grandchildren of formerly elite Chinese landowners have a 14.5 percent chance of remaining in the top decile of earners; in the US and Canada, the descendants of top-decile earners have, respectively, a 14.1 percent and 11.1 percent chance of remaining in that top decile.

The researchers investigate the intergenerational transmission of key values as a potential explanation for such persistence. They find that the grandchildren of elite families are less averse to inequality, more individualistic, and more likely to consider effort as important to success. They also find that these grandchildren work substantially more hours. Notably, these trends are strongest among people who live with their parents, and are nonexistent among those whose parents died young, suggesting that formerly elite families may have passed down critical values at home to ensure their family members thrive. The researchers conclude that "the cultural transmission within the family seems to have survived extraordinarily broad and deep institutional and political changes, with an extraordinary resilience."