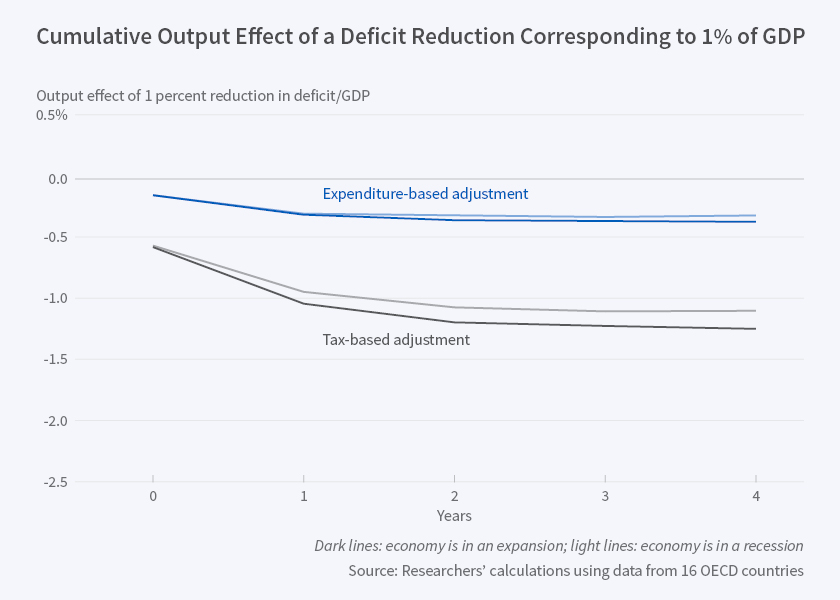 Whether fiscal adjustments are implemented via tax or expenditure changes is an important determinant of their impact on national income, independent of the business cycle.

Economists have long studied and debated how fiscal adjustments affect economic output. New data, and new methods of analysis, continually influence this dialogue. At a very general level, changes in fiscal policy can take two forms: changes in taxes, and changes in government spending. Whether changes in taxes have the same effect on output as equal magnitude, but opposite signed, changes in spending, and whether the relative effects of tax and spending vary over the business cycle, are both open questions.

In Is It the "How" or the "When" That Matters in Fiscal Adjustments? (NBER Working Paper 22863), Alberto Alesina, Gualtiero Azzalini, Carlo Favero, Francesco Giavazzi, and Armando Miano address both of these questions. They test whether government expenditure reductions and tax increases have similar effects on output and investigate whether the effects of these policy actions depend on aggregate economic conditions prevailing when they are adopted. They find differences: At least in the short run, when governments pursue contractionary policies, tax-based adjustments are costly in terms of output losses, while expenditure reductions have very low output costs. This difference appears to be independent of the business cycle.

The researchers observe that actual fiscal policies "have little resemblance to the isolated fiscal 'shocks' often studied in the literature." They point out that shifts in fiscal policy typically are designed to take effect over a period of years; they are adopted after lengthy debates, and may be modified in unexpected ways by political deals made in legislatures shortly before they take effect. Also, they often are modified after implementation. Rather than study the effects of isolated fiscal shocks, the researchers study the effect of "fiscal plans," which they define as announced deviations from the fiscal policy status quo that are implemented over a period of years.

Using original budget documents at the country level, the researchers reconstruct the historical fiscal plans carried out by 16 OECD countries between 1978 and 2014, classify the measures that compose these plans as either "expected" or "unexpected," and treat any unexpected amendment to an announced plan as a new plan. They classify each plan as tax-based or expenditure-based, and they construct a measure of business cycle conditions at the time the plan is announced.

The classification variables allow the researchers to compare the results of similar fiscal plans announced in different countries at different points in the business cycle, and also to compare fiscal plans that rely primarily on tax and on spending adjustment. Their findings point to different effects for tax-based and expenditure-based plans. Expenditure-based fiscal adjustments imply output declines not far from zero, an average which can be the results of some having substantial costs and others being possibly expansionary. Tax-based adjustments induce recessions, with output losses as large as three per cent of GDP after a few years, for an adjustment measuring one percent of GDP. By comparison, they find relatively little difference in the effect of a given plan announced at different points in the business cycle.

The researchers caution that they address effects on output, not on welfare. They remind readers that "losing one per cent of GDP when the economy is already in a recession can be more harmful than losing the same amount of output when the economy is expanding." They also remind the reader that the paper studies fiscal retrenchments; their results have nothing to say about fiscal expansions.

Is it the "How" or the "When" that Matters in Fiscal Adjustments?