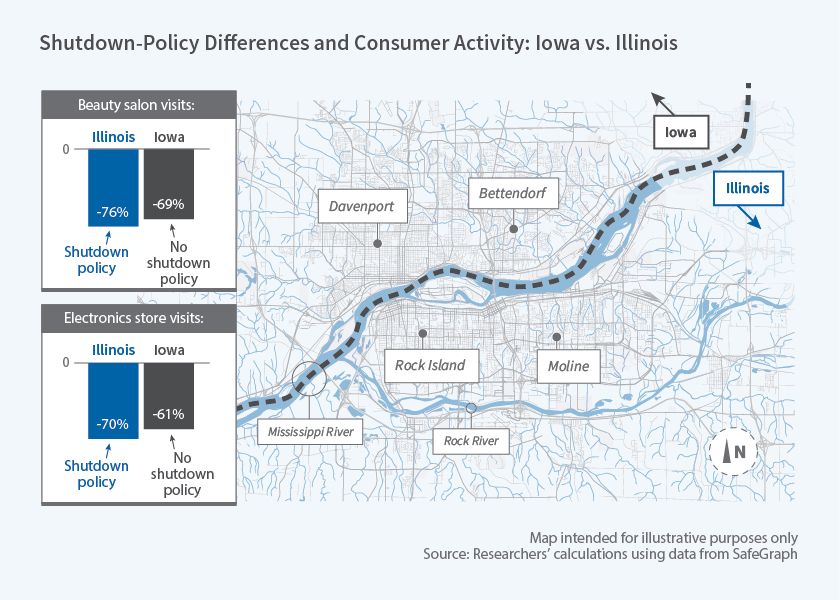 Similar businesses suffered similar declines in customer visits, regardless of whether they were in counties covered by shelter-in-place orders.

Government policies restricting business operations and personal mobility were less important than consumers' self-imposed limitations in contributing to the steep drop in economic activity during the early months of the COVID-19 pandemic, according to findings presented in Fear, Lockdown, and Diversion: Comparing Drivers of Pandemic Economic Decline 2020 (NBER Working Paper 27432). Voluntary behavioral changes occurred because of consumers' fears of catching the virus, researchers Austan Goolsbee and Chad Syverson show. They conclude that repealing restrictions is not a particularly powerful tool for restarting growth so long as individuals continue to fear infection.

By comparing counties with and without restrictions, the researchers conclude that only 7 percentage points of the 60 percentage point overall decline in business activity can be attributed to legal restrictions. Most of the decline resulted from consumers voluntarily choosing to avoid stores and restaurants. The results were similar regardless of whether differences in restrictions arose because neighboring counties within a commuter zone shut down at different times or because some counties shut down while their neighbors did not. Consumer traffic began to decline before legal restrictions were imposed and was closely correlated with the number of local COVID-19 deaths.

The researchers also find that to avoid crowds, consumers shifted from larger to smaller establishments. Comparing business traffic in January with that during the week of April 12 — the low point for economic activity in the sample — they found that activity was down 70 percent at establishments in the top quintile in size for their industry, compared with 45 percent for those in the bottom fifth. The shift away from larger businesses was more pronounced in communities harder hit by the disease.

Reflecting the findings that consumer self-protection rather than legislated restrictions most affected consumer behavior, the researchers caution that lifting lockdowns could have the unintended effect of discouraging consumer spending. "If repealing lockdowns leads to a fast enough increase in COVID infections and deaths and a concomitant withdrawal of consumers from the marketplace, they might ultimately end up harming business activity."