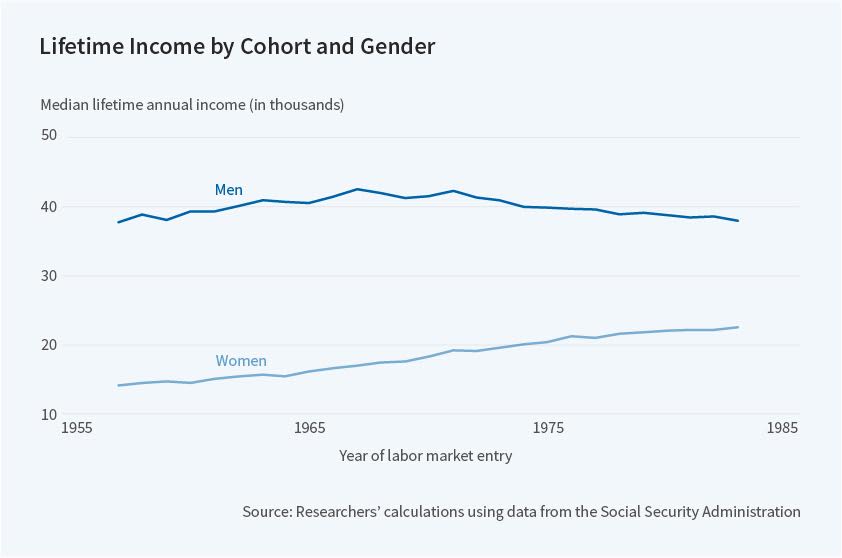 Average lifetime incomes of men entering the workforce since the 1960s have stagnated or fallen, while those of women have increased, according to the analysis presented in Lifetime Incomes in the United States Over Six Decades (NBER Working Paper No. 23371).

Fatih Guvenen, Greg Kaplan, Jae Song, and Justin Weidner draw on Social Security Administration data to provide what they believe is the first analysis of lifetime income distributions for a large number of cohorts in the United States. They find that while the earnings gap between men and women has narrowed over time, income inequality has been growing within both genders.

The study defines lifetime income as total labor earnings from ages 25-55. The researchers compile complete income histories for 27 cohorts of workers. Those in the oldest cohort turned 25 in 1957; those in the youngest turned 25 in 1983. The sample is restricted to private sector workers in commerce and industry, sectors continuously covered by Social Security over the study period.

Expressed in 2013 dollars, the median male who turned 25 in 1983 earned $136,400 less in lifetime income than did his 1967 counterpart. This decline was somewhat offset by an increase in nonwage benefits, primarily health insurance and pension contributions. But even using an upper bound estimate of the growth of such benefits, the researchers find that the 1983 cohort's median lifetime income was $96,100 lower than that of the 1967 cohort.

They find that while lifetime earnings increased across the spectrum for the 1957-67 male cohorts, they rose for only the top 20 percent of men in the cohorts between 1967 and 1983. The researchers attribute most of the fall in median lifetime income to a downward trend in men's earnings in the early years of their careers. The median income for a 25-year-old in the 1967 cohort was $33,000, compared with $29,000 (inflation adjusted) in the 1983 cohort. For 35-year-olds, the comparable figures fell from $50,600 to $42,400. "To our knowledge," the researchers write, "the fact that a substantial fraction of the rise in cross-sectional and lifetime inequality for men can be attributed to a rise in inequality at age 25 has not been emphasized in previous work."

The researchers used the personal consumption expenditure deflator to adjust earnings for inflation. They point out that had they used the Consumer Price Index for that purpose, the decline in median earnings would be even larger.

The study reports a steady climb in median lifetime income for women. For the 1957 cohort, median female lifetime earnings were just 37 percent of those of the median male; for the 1983 cohort, that figure was nearly 60 percent. Female lifetime earnings rose at all percentiles throughout the study period. However, while the gains were spread evenly for the 1957-67 cohorts, growth was significantly skewed toward the upper percentiles for the 1967-83 cohorts.

Looking at the most recent data, the researchers note that, since 1979, the median earnings of women early in their careers have remained essentially flat when adjusted for inflation. That could portend a trend toward sluggish or falling median lifetime earnings, as has been the experience among men. The researchers forecast increasing income inequality for the population as a whole.

Lifetime Incomes in the United States over Six Decades