The Glass Ceiling and the Paper Floor: Gender Differences Among Top Earners, 1981-2012 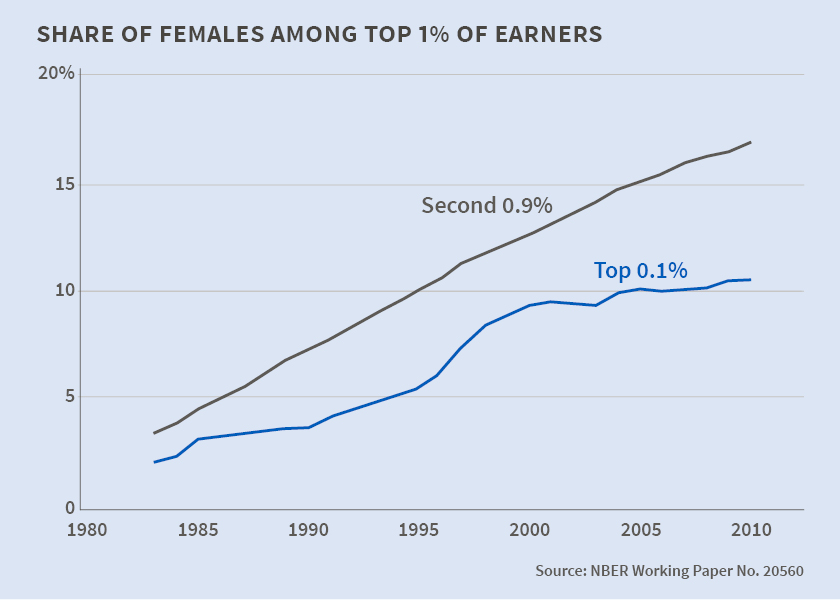 While still small, the share of top earners who are women has increased over time, and women's chances of falling out of the top group have declined.

Individuals in the top 1 percent of the income distribution in the United States earn 15 percent of all pre-tax income and pay 40 percent of all individual income taxes. In The Glass Ceiling and the Paper Floor: Gender Differences Among Top Earners, 1981-2012 (NBER Working Paper No. 20560), Fatih Guvenen, Greg Kaplan, and Jae Song explore how the gender composition of this group has changed over the last three decades.

While the share of top earners who are women has been small throughout the period being studied, the authors find that over time women have become better represented in the top earnings group. Once in this group, women have a much greater chance of staying there today than 30 years ago. This suggests that women are shoring up what the authors describe as the "paper floor" through which a substantial number of top earning women used to slip back into lower-earning brackets.

When earners were ranked by their average earnings over the 1981-85 period, women made up 1.9 percent of the top 0.1 percent and 3.3 percent of those in the next 0.9 percent of the distribution. By comparison, when earners were ranked by their average earnings in the 2008-12 period, women represented 10.5 percent and 17 percent of those groups. In 1981�85 there were 50.6 men for every woman in the top 0.1 percent, compared to 8.5 in 2008-12. This change does not appear to be the result of rising earnings by some members of the cohorts that were in the labor force in the earlier period, but rather is attributable to a greater share of women in the top-earning ranks of younger cohorts.

The authors caution that those identified as top earners based on short-horizon measures like annual earnings may not correspond to top earners based on lifetime labor market experience. Lifetime top earners have faster earnings growth between ages 25 and 43 than other groups, and the gender gap among top earners is largest among the 30-year-olds. The authors observe that this is consistent with the hypothesis that "career interruptions for family reasons explain a substantial portion of the top earnings gender gap."

The data suggest that only 7 to 9 percent of the increase in the female share in the top percentiles is due to increased female labor force participation. The similarity of gender composition of groups of top earners across industries suggests that the increase in female top earner membership is an across-the-board phenomenon.

The data set for the study was a 10 percent sample of the Social Security Administration Master Earnings File from 1981 to 2012. This file contains all of the information reported by employers on employee W-2 forms each year. The authors' sample was limited to people aged 25 to 60 who had annual earnings of at least $1,885, as measured in 2012 dollars.

The authors conclude that a "dramatic increase in the persistence of female top earners has been an important factor in accounting for the rise in the share of females among top earners."

The Glass Ceiling and The Paper Floor: Gender Differences among Top Earners, 1981-2012