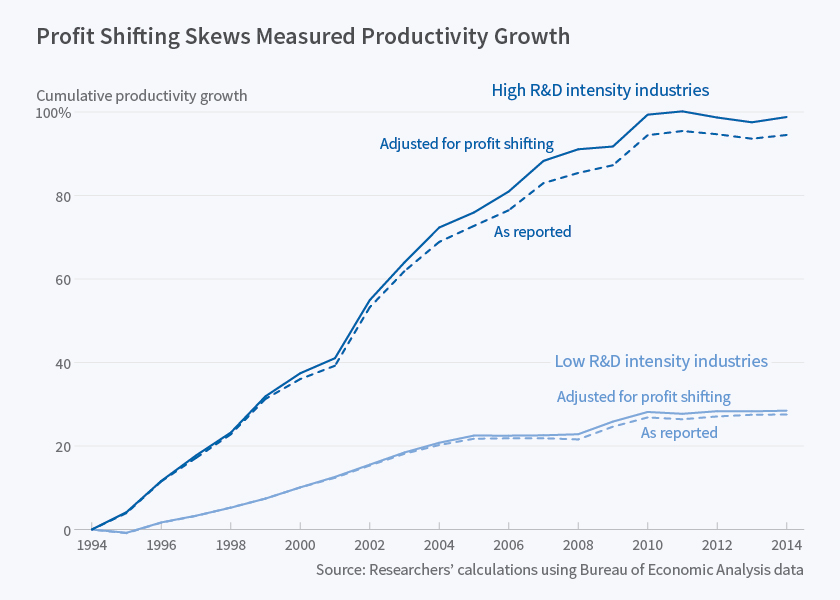 When a U.S. parent company engineers product components domestically, then transfers the profits from these intangible assets to a foreign affiliate, measured U.S. growth may suffer.

Recent reports of declining U.S. productivity growth have spurred discussion of whether official statistics accurately measure the impact of certain technologies, such as smartphones and broadband Internet. While the usual concern is that the impact of these goods on the real value of consumption is understated, in Offshore Profit Shifting and Domestic Productivity Measurement (NBER Working Paper 23324), Fatih Guvenen, Raymond J. Mataloni, Jr., Dylan G. Rassier, and Kim J. Ruhl suggest that international profit shifting by U.S.-based multinational companies, particularly in R&D-intensive industries, may affect the measurement of gross domestic product (GDP) and productivity growth.

Differences in corporate tax rates across countries give multinational enterprises (MNEs) an incentive to legally book earnings in foreign affiliates located in low-tax countries. This overstates the economic activity of the foreign affiliates relative to the domestic parent. This type of profit shifting may occur when a U.S. parent company engineers parts of its product, such as software and design, domestically, then transfers the profits from these intangible assets to a foreign affiliate. Calculations of U.S. gross national product (GNP) incorporate the transferred profits as "earnings on U.S. direct investment abroad (USDIA)," but these earnings are not counted as domestic product in measuring GDP. Earnings on USDIA comprised less than 1 percent of U.S. business-sector value added from 1973 to 1993 but equaled 3.7 percent of business-sector value added in 2012.

To examine the impact of profit shifting on the measurement of official statistics, the researchers employ Bureau of Economic Analysis data on MNEs from 1982-2014 to reattribute earnings on USDIA. They use labor compensation and sales to unaffiliated parties as proxies for the "true" location of economic activity. The researchers reattribute 65 percent of earnings on USDIA to the United States — mostly from low-tax countries such as Bermuda, Ireland, and the Netherlands.

The researchers' adjustments raise U.S. business-sector value added by about 0.5 percent annually from 1973 until the late 1990s. The adjustments becomes larger in the 2000s: their estimate of business-sector value added is 2.5 percent higher in 2010 than that reported in the official statistics. After the adjustments, productivity growth is unchanged prior to the 1990s, 0.1 percent higher annually from 1994 to 2004, 0.25 percent higher each year from 2004 to 2008, and unchanged after 2008. The findings reduce the estimated magnitude of the productivity slowdown in the last two decades, but do not eliminate it. From 2004 to 2014, the adjustments raise annual productivity growth from 1.44 to 1.48 percent, still much below the annual 3 percent growth seen from 1994-2004.

Just as U.S. parent companies engage in profit shifting to foreign affiliates, foreign parent companies have an incentive to shift profits away from their U.S. affiliates if their home country tax rate is lower than in the United States. Data limitations prevent the researchers from fully measuring these effects, but they are able to reattribute profits for 98 large foreign-owned businesses in 2012 and 68 large foreign-owned businesses in 2007. Profits would have been $21 billion higher for the 98 U.S. affiliates in 2012 and $13 billion higher for the 68 U.S. affiliates in 2007. These findings suggest that foreign MNEs shift their profits away from U.S. affiliates. Thus, the researchers' adjustments are likely a conservative estimate of the impact of profit shifting on measurement of U.S. GDP and productivity growth.