The Mortality Cost of Political Connections in China 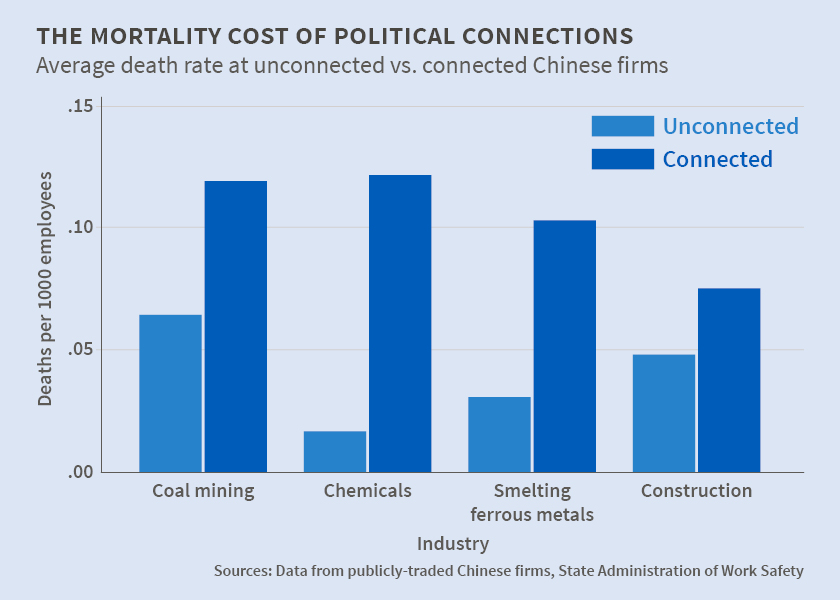 Chinese firms with a former top government official in the C-suite had higher worker death rates, few if any safety inspections, and lower rates of environmental fines.

Economists have long debated the extent to which political ties allow businesses to circumvent regulations. In The Mortality Cost of Political Connections (NBER Working Paper No. 21266), Raymond Fisman and Yongxiang Wang conclude that hiring senior managers from the ranks of high-level municipal government posts tends to insulate publicly traded Chinese industrial firms from the rigors of safety oversight and regulation. They begin by documenting a robust positive correlation between political ties of executives and comparatively high worker death rates.

Defining a politically connected firm as one in which a C-suite executive formerly held a high-level government post, the researchers find that the annual number of workplace deaths in "connected" firms was 0.084 per 1,000 employees from 2008 to 2013, compared to a rate of 0.024 per 1,000 in firms without such a connection. This difference persists when they identify the role of connections based on executive turnover, which leads to changes in a firm's connectedness over time.

Political connections did not protect connected firms from the regulatory backlash that followed a worker's death. In years where fatalities occur, safety audit rates are identical for connected and unconnected firms. Further, in the 30 days following a fatality, connected firms' share prices fell by as much as 9 percent relative to the share prices of unconnected firms. This response from investors is consistent with future profitability: In the following year, their profit advantage disappeared, possibly because fatalities also result in firms losing their connections. The executives themselves fared reasonably well. Though they commonly departed following a fatal accident, in 19 out of 26 cases examined they found high-level positions at other firms.

The authors document some promising results on potential for regulatory incentives to attenuate the effects of connections on safety, using the "No safety, no promotion" (NSNP) policies that China's provinces began adopting in 2005. Prior to 2004, local Chinese officials were evaluated and promoted based on their ability to produce economic growth. The NSNP policies "made the promotion of safety regulators and other local government officials contingent on their meeting the safety target set for the region by the provincial government." By 2014, 20 of 31 provinces had adopted such policies, giving local safety officials a strong incentive to monitor firm safety behavior and possibly reducing the insulation provided by politically connected executives.

The sample included all publicly traded Chinese companies in nine major industries. Worker death statistics were obtained from firms' Corporate Social Responsibility reports and Chinese SEC disclosures. To control for under-reporting, the authors cross-checked firms' disclosures with data from the official website of the State Administration of Work Safety and a media search based on WiseSearch, a database which covers stories from more than 2,000 Chinese newspapers.

The authors caution against making any causal statements based on their findings, warning that they are presenting preliminary results based on observational data. They emphasize that more research is needed, in China and elsewhere, to fully understand the welfare consequences of exploitation of political ties by businesses.

The Mortality Cost of Political Connections