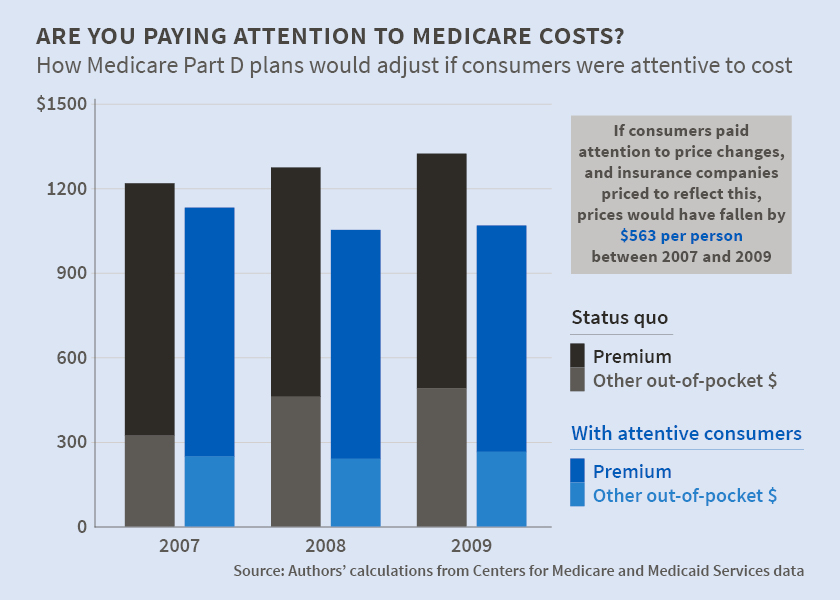 Even if consumers do not choose the lowest-cost plans, simply prompting them to choose a new plan every year has a substantial cost-reduction effect.

Insurers profit when consumers enrolled in the Medicare Part D drug program fail to shop around for the most economical insurance provider. In The Impact of Consumer Inattention on Insurer Pricing in the Medicare Part D Program (NBER Working Paper No. 21028), Kate Ho, Joseph Hogan, and Fiona Scott Morton model the behavior of "inattentive" consumers and examine how insurers respond to this behavior. Intuitively, firms have an incentive to choose a higher price if they forecast that consumers will not notice it, and therefore continue to buy. The researchers then use their models of consumer demand for insurance policies, and firms' pricing policies, to calculate the consequences of eliminating consumer inattention. They consider how insurance companies would alter their pricing in response to consumers becoming more responsive to plan characteristics.

The results indicate that over three years, an average consumer would save $563, and the government would save $550 million as a result of reduced premium costs (and therefore reduced subsidies). By the third year, government savings due to "better shopping" on the part of consumers would amount to 8.2 percent of the cost of subsidizing Medicare Part D enrollees.

The authors study a dataset that was provided by the Centers for Medicare and Medicaid Services that includes detailed information on the choices and claims of nearly half a million non-subsidized Medicare Part D enrollees in New Jersey in 2006-09. In analyzing this dataset, the researchers find that many consumers made choices that led to spending more than the cost of the lowest-cost plan available. They do not find any evidence that consumers become better shoppers as they gain experience in the program. The dataset makes it possible to study the choices of new enrollees in Medicare Part D, and to track their choices over time.

The data suggest that because of information processing costs or other factors, consumers avoid making new choices when they renew their insurance policies. They are likely to roll over their plan selections from one year to the next unless shocked by an adverse change to their current plan or their health. They may also underestimate out-of-pocket payments relative to plan characteristics that are easier to observe, such as premiums and gap coverage.

In addition to studying consumer behavior using the Medicare Part D policy date, the authors also analyze a national dataset that includes information on insurance plan characteristics, pricing, and enrollment to study the determinants of premiums. They find that premiums rise steadily over time and that plans with larger market shares set prices in a manner consistent with high choice frictions. The researchers conclude that more attentive and price-elastic consumers would result in lower insurer margins. In particular, they estimate how the pricing of insurance policies would change if consumers were fully aware of the prices and features of different policies and if they made optimal decisions in light of this information. They estimate that if insurers did not change their policy prices in response to greater consumer attention, the average consumer saving would be just $162 per year. However, when they allow insurance companies to adjust prices as their model suggests they would, the savings increase significantly. The study concludes that even if consumers do not choose the lowest-cost plans, because of information processing costs or for other reasons, simply prompting them to choose a new plan every year would have a substantial effect in reducing costs because of the supply-side response.