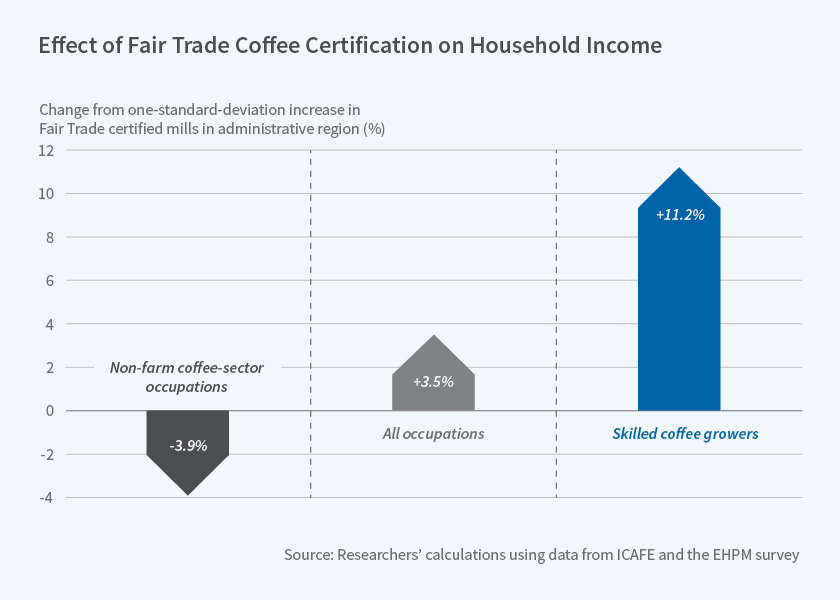 Costa Rican growers, coffee workers, and their neighbors all experience gains; only intermediaries' incomes are reduced.

The fair trade movement began as an initiative of a church-based NGO in the Netherlands whose members were concerned about the impact of low coffee prices on growers and pickers. It was replicated elsewhere in Europe and North America, and expanded to cover numerous agricultural products from the developing world. Various groups coalesced into the Fair Trade Labelling Organizations International (FLO) in 1997.

The primary benefits of certification for coffee growers arise from changes in prices. Fair Trade-certified growers are guaranteed a minimum price for their product, and the price is set high enough to cover typical costs of production, thus reducing many of the risks small producers face due to global price fluctuations. Growers also receive a premium, above the guaranteed sale price, which must be used for projects that, as the researchers write, "improve the quality of life of producers and their communities." Producers have used the premiums to fund local schools, health care facilities, and infrastructure, to establish scholarships, and to improve production practices.

The study also explores the effects of certification on the incomes of growers and other households in nearby communities. Fair Trade certification produces income increases for those working in the coffee industry as well as others who are not employed in coffee production. Specifically, an increase of one standard deviation in the intensity of Fair Trade-certified growers in a given area is associated with a 3.5 percent increase in average income for households in that area.

Households employed in the coffee sector experience greater income increases on average, although these effects vary across subgroups. Skilled coffee growers, for example, experience an additional 7.7 percent increase in their average incomes, beyond the 3.5 percent increase that the community at large experiences, when the intensity of certification increases in an area. Unskilled workers in the coffee sector do not experience benefits beyond those felt by the larger community.

Only one set of workers in the coffee industry — those who work for intermediaries — appear to experience income reductions as a result of certification. Those working in non-farm occupations such as transportation, storage, and sales experience a 3.9 percent decline. The researchers attribute this to the fact that Fair Trade producers are encouraged to perform some intermediary functions themselves. Certified growers may be more likely to take their product to the cooperative mill for processing.

The non-farm group represents only 6.7 percent of those employed in the coffee sector. Additionally, the researchers point out that "[s]ince non-farm workers have incomes that are approximately 50 percent higher than the skilled farmers...[FT certification] decreases income inequality within the coffee sector by transferring rents from intermediaries to farmers."

The study also shows that an increase in the intensity of certification in an area produces positive spillover effects on education, likely due to the fact that cooperatives often use their price premiums for scholarships and other education investments. An increase of one standard deviation in the intensity of Fair Trade certification in an area is associated with an increase of between 2 and 5 percentage points in the probability of school enrollment among children aged 13-17.

The Effects of Fair Trade Certification: Evidence from Coffee Producers in Costa Rica