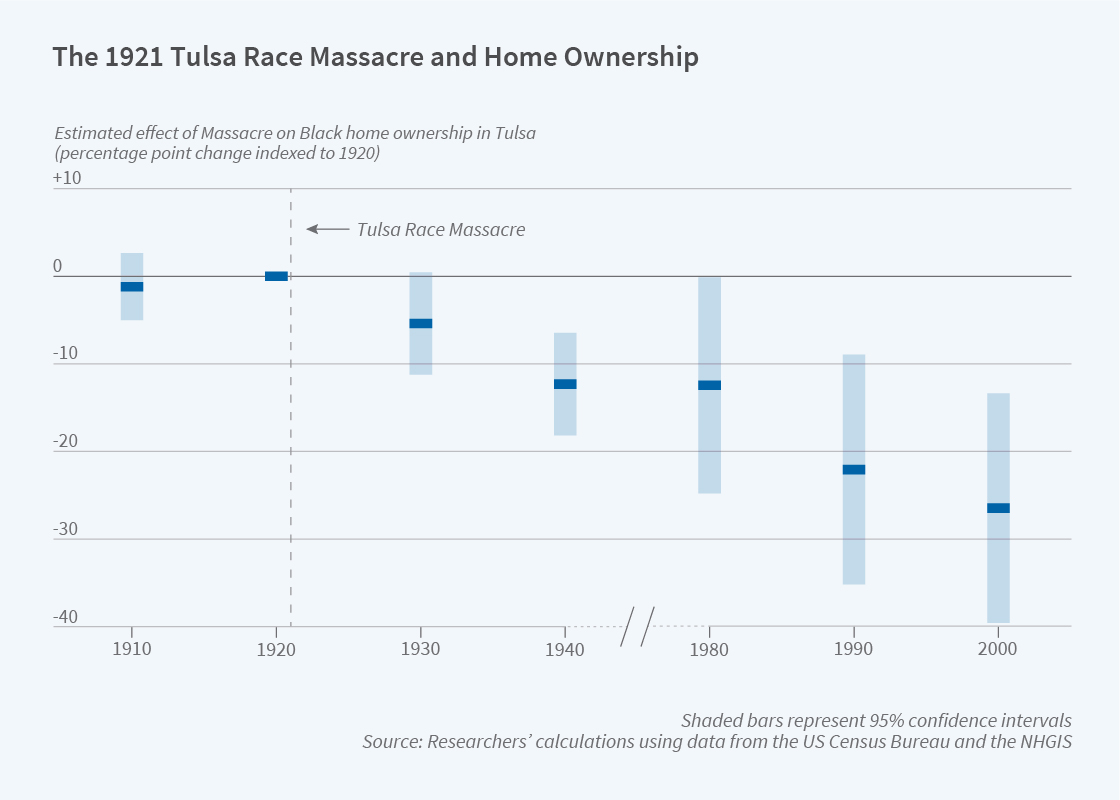 Destruction of Black Wall Street and the death or impoverishment of its residents reduced Black home ownership in Tulsa for decades and had spillover effects in other locations.

On May 31 and June 1, 1921, 35 square blocks of the Greenwood neighborhood, a thriving Black community in Tulsa, Oklahoma, were destroyed in one of the worst incidents of racial violence, murder, and destruction in postbellum US history. In this area hailed as Black Wall Street, homes and businesses were looted and burned. Estimates of the number of deaths vary, but range up to 300. Residents were taken to internment centers at gunpoint.

Prior to the event, the Greenwood neighborhood had 191 businesses, a library, two schools, and a hospital. The researchers examine the consequences of the massacre for those whose businesses and homes were looted and destroyed, the longer-term effects on home ownership and occupational status, and potential effects on Black entrepreneurship and home ownership in other parts of the United States. They focus in particular on the short- and medium-run effects of the massacre on Black Tulsans’ home ownership and occupational status. They examine Census data spanning three decades, 1910–1940, on city or county of residence and racial group (White, Black, and other), and compare Black to White individuals within Tulsa County and elsewhere before and after the massacre.

In addition to the direct impacts on those who experienced the massacre, the researchers find evidence of spillover effects on Black communities in other parts of the United States. These effects were most pronounced for those who were exposed to extensive newspaper coverage of the massacre or who lived in areas, like Tulsa, with high levels of racial segregation, which facilitated targeted destruction of Black-owned homes and businesses. The estimated spillover effect on Black home ownership in the state with the greatest newspaper exposure is about 75 percent the size of the direct effect experienced by Black Tulsans. For those in the least exposed state, there is no spillover effect.

The researchers conclude that the massacre “provided a warning of the danger of the accumulation of wealth through home ownership. In an instant, one’s home and possessions could be destroyed.”

Economics of Crime
Race and Stratification in the Economy

After the Burning: The Economic Effects of the 1921 Tulsa Race Massacre