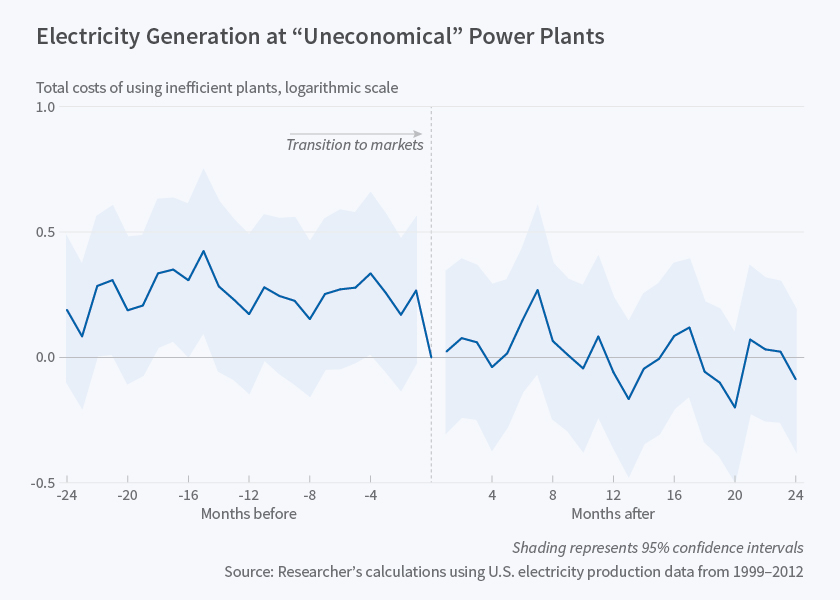 In the last two decades, more than half of the wholesale electricity transmission systems in the United States have adopted some form of market mechanism to determine which power plants would operate. Based on an examination of hourly supply and demand patterns on the U.S. electrical grid, Steve Cicala estimates that these new markets reduced aggregate electricity generation costs by $3 billion a year. His results are reported in Imperfect Markets versus Imperfect Regulation in U.S. Electricity Generation (NBER Working Paper No. 23053).

Electricity production must be exactly synchronized with demand, which has large daily, weekly, and seasonal swings. The integrity of the U.S. electrical grid is maintained by roughly 100 "balancing authorities," which determine when power plants start up and shut down to match these fluctuations. Historically, these decisions were made by engineers within the vertically integrated utilities that owned the power plants, transmission system, and distribution networks that serve customers. This regulatory structure resulted in a grid built for reliability, rather than substantial interregional transmission of electricity. Over 90 percent of power was generated in the local power control area where it was consumed.

With changes in federal regulations (and encouragement from the Federal Energy Regulatory Commission), balancing authorities began to turn their responsibilities over to independent system operators, who use day-ahead and real-time auctions to balance supply and demand, often across multiple power control areas that were previously operating autonomously. Between 1996 and 2012, 60 former power control areas adopted such "market dispatch" overnight by either joining an existing market, or participating in the creation of a new one. Roughly two-thirds of electricity production in the United States is now determined by the outcomes of these markets.

Using data on fuel costs, capacities, heat efficiency, and the operations of nearly all generating units in the U.S., Cicala constructs power supply curves ranking production units from lowest to highest cost for each of the 98 areas at an hourly resolution from 1999 to 2012. He then estimates the excess costs that occur when higher cost plants are used to produce power even though lower cost plants are available. In some cases, using high cost plants is appropriate when lower cost generators are unavailable as a result of normal grid operations such as maintenance, refueling, start-up costs, and transmission congestion. Withholding lower-cost units from auction is also how firms exert market power. He also measures changes in trade across power control areas, and the associated gains from offsetting higher-cost generation.

He uses the staggered roll-out of markets to estimate the impact these new mechanisms have on production costs by comparing changes in operations following market adoption to those of areas that have not undergone any changes. Because fuel price changes unrelated to market transitions impact the measurement of cost savings, he uses machine learning algorithms to predict the system operator's complex rules for dispatching generators in the absence of markets, and compares observed and predicted behavior across groups. He finds that markets encouraged both increased trade across areas, and reduced usage of higher cost units. The 20 percent improvement in each of these metrics reduced production costs by about $3 billion per year.