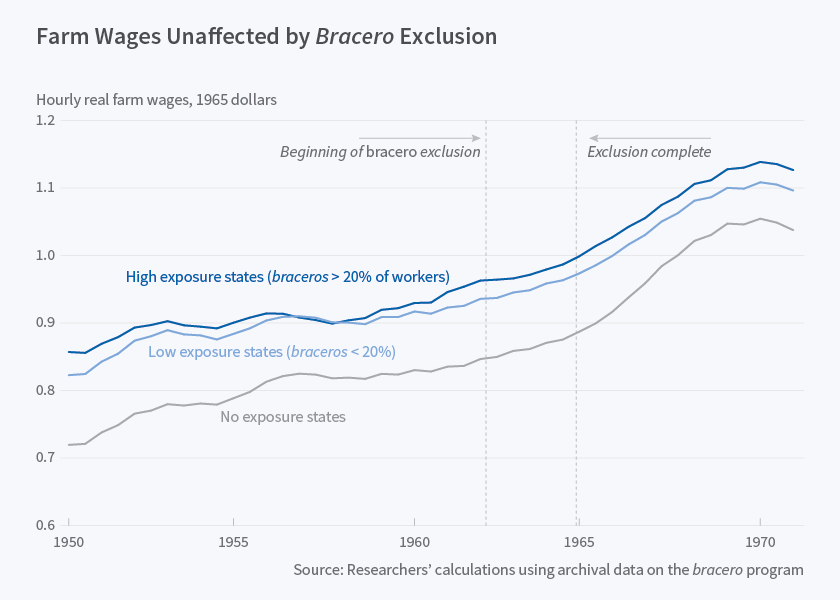 Termination of the program between the U.S. and Mexico at the end of 1964 led employers to adopt more labor-saving technology rather than to raise domestic wages or employment.

The 1964 termination of the bracero program, which recruited Mexican guest workers to work on American farms, had "little measurable effect on the labor market for domestic farm workers." That is the conclusion of Immigration Restrictions as Active Labor Market Policy: Evidence from the Mexican Bracero Exclusion (NBER Working Paper 23125), by Michael A. Clemens, Ethan G. Lewis, and Hannah M. Postel.

By bilateral agreement, the bracero (a Spanish term for manual laborer) program allowed Mexicans to work seasonally on American farms, starting in 1942. At the program's height, nearly half a million workers came each year, comprising over a third of the Mexicans then working in the United States. They made up 40 percent of all seasonal farm labor in many states. The 1964 decision to exclude braceros was made explicitly to raise wages and employment for domestic farm workers. It was therefore a significant change in labor market policy for domestic workers in the states and industries that employed the migrant laborers.

The researchers compare labor market outcomes for native workers before and after exclusion of the Mexican workers in heavily affected, lightly affected, and unaffected states. They find that pre- and post-exclusion farm wages and farm employment were similar in states highly exposed to exclusion — which lost roughly one-third of hired seasonal labor — and in states with no exposure. Moreover, the study shows that braceros were not substantially replaced with domestic workers in the years immediately following exclusion; rather, the researchers find evidence that farm owners rapidly adopted new, labor-saving technologies.

In six states where braceros comprised more than 20 percent of seasonal agricultural labor, trends in real farm wages before and after the program ended were similar to those in 17 states where braceros comprised 3 to 4 percent of the agricultural workforce. Wages in both groups of states rose more slowly after bracero exclusion than in 23 states that had not had any braceros. In both high and low exposure states, average wages rose roughly 14 percent between 1964 and 1969, while in states with no exposure they rose about 21 percent. The researchers find no evidence that excluding Mexican workers affected the movement of seasonal domestic workers between states.

Farmers accelerated mechanization of the production of tomatoes, sugar beets, and cotton after the bracero exclusion. Production of those crops dipped but, at least for tomatoes and cotton, the declines were modest and short-lived. For crops where no advanced machinery was available, there tended to be larger and lasting declines in production.

The study does not test whether the complex effects of exclusion led to a net benefit or net cost to U.S. productivity overall.