New Estimates of the US Homeless Population 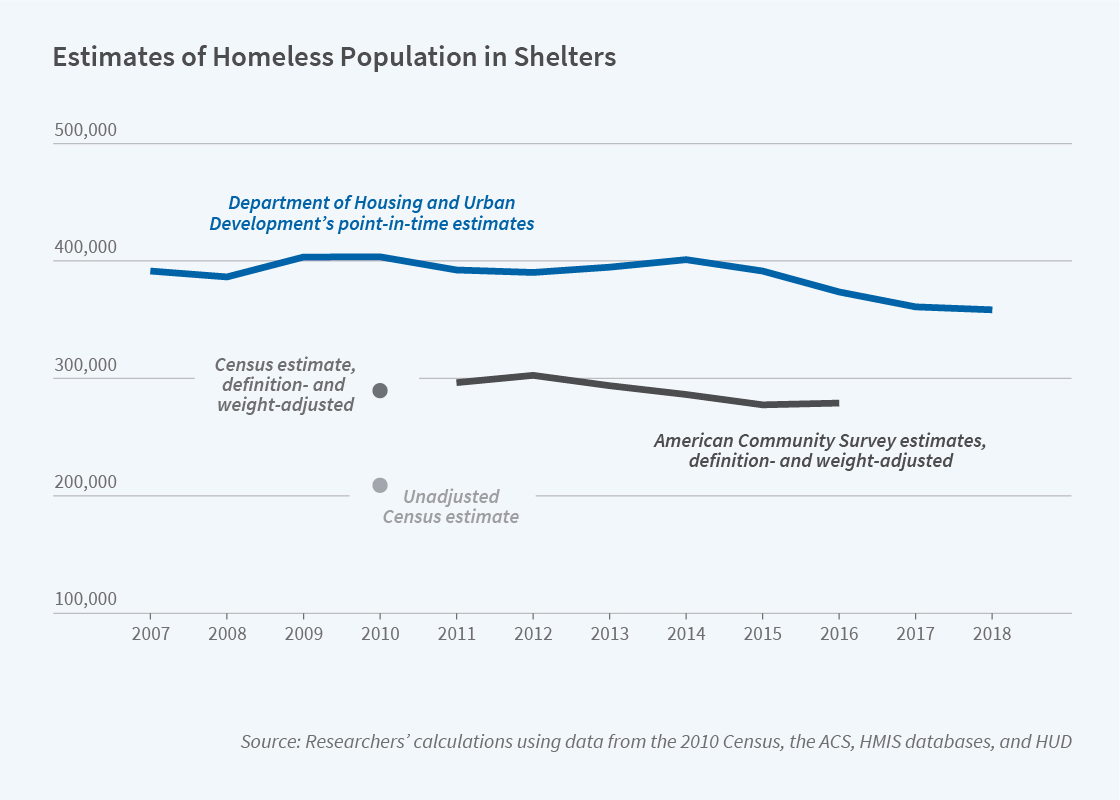 Counting the homeless population involves substantial challenges, most importantly the inability to use address-based survey approaches that are the foundation of Census Bureau enumeration and many household surveys. This raises questions about the completeness and reliability of any estimates of the homeless population.

In The Size and Census Coverage of the US Homeless Population (NBER Working Paper 30163), Bruce D. Meyer, Angela Wyse, and Kevin Corinth compare three detailed, restricted-use data sources to less-detailed public estimates of the homeless population. Their findings support the estimates in the most widely cited, but not uncontroversial, source.

Analysis of restricted-use microdata places the number of homeless between 500,000 and 600,000, and suggests that about two-thirds sleep in shelters.

The standard source of information on the homeless, the Department of Housing and Urban Development’s Point-in-Time (PIT) count, is often questioned but studies of its quality examine few geographical areas and are somewhat dated. The completeness and coverage of shelter-use microdata, which are employed in the PIT’s sheltered homeless estimates, have been little studied.

To develop new estimates of the homeless population, the researchers compare restricted data from the 2010 Census, the American Community Survey (ACS), and the Homeless Management Information System (HMIS) databases from Los Angeles and Houston to PIT estimates as well as the Housing Inventory Count. The ACS and HMIS include those in homeless shelters, while the Census includes both sheltered and unsheltered homeless individuals.

The researchers find that estimates of the homeless population from the 2010 Census, the ACS, and the PIT count are quite similar once definitional and weighting differences and discrepancies due to the long window of Census responses are taken into account. Taken together, these estimates suggest that on a given night there are between 500,000 and 600,000 homeless people in the US, with about one-third sleeping on the streets and two-thirds in homeless shelters. Between 80 and 95 percent of those residing in HMIS shelters appear to have been included in the 2010 Census, although fewer — between 35 and 45 percent — were included in the Census’s sheltered homeless count. The others were counted as housed, unsheltered homeless, or as residents of other types of group quarters.

The researchers also find significant double counting of individuals who were recorded as homeless in the 2010 Census. They estimate that over 20 percent of the sheltered homeless, roughly half of those at soup kitchens and food vans and about one-third of those at outdoor locations, had at least one housed record in addition to their homeless record. This appears to be the result of many individuals being included on the Census questionnaire of a household where they occasionally reside, despite having actually been on the streets the day of the counting operation. This result suggests that at least some members of the homeless population make frequent transitions between housed and homeless living situations and that they may be included in household surveys more often than previously thought.

The Size and Census Coverage of the U.S. Homeless Population