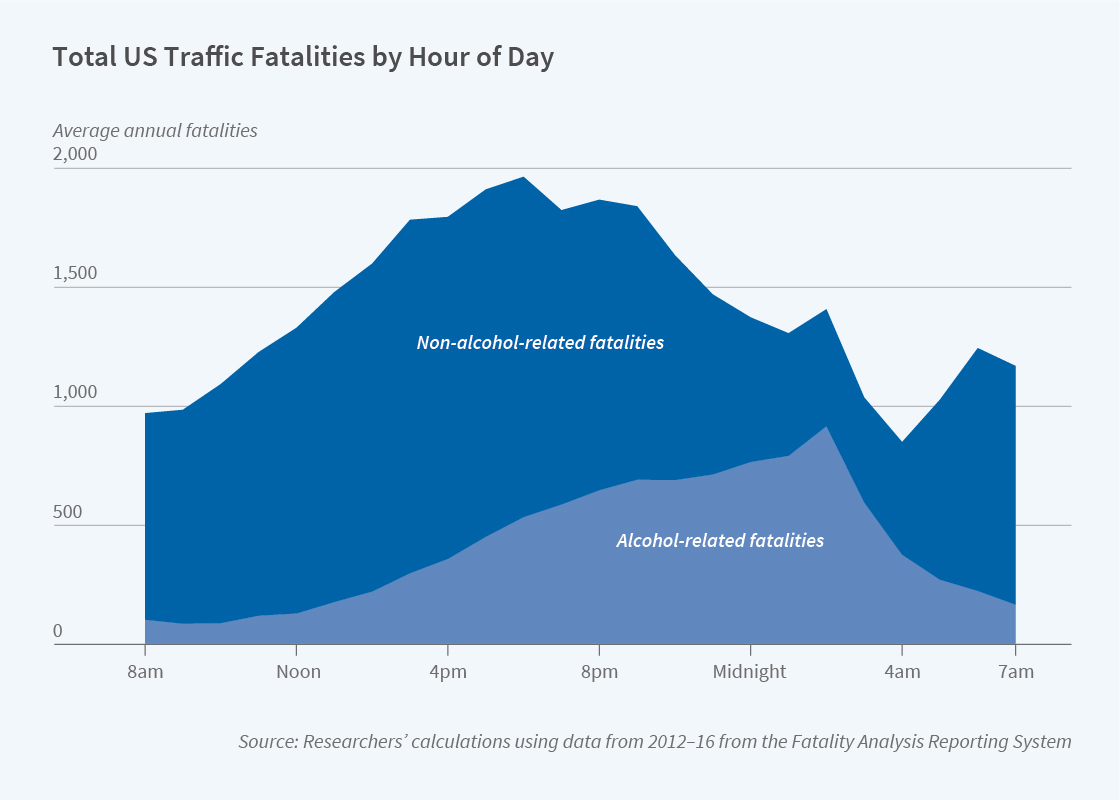 Alcohol-related deaths in traffic accidents have decreased by 6 percent in areas of the United States where ridesharing has become available.

Nearly a third of all traffic fatalities in the United States involve alcohol consumption. Drunk drivers are an order of magnitude more likely to be involved in fatal crashes than their sober counterparts. In Uber and Alcohol-Related Traffic Fatalities (NBER Working Paper 29071), researchers Michael L. Anderson and Lucas W. Davis find that ridesharing, by providing an alternative to driving after drinking, reduces alcohol-related traffic crashes, especially on nights and weekends.

The researchers examine traffic fatality data from 2001 to 2016. This allows them to detect any pre-ridesharing trends before the appearance of ridesharing firms in 2010. Using proprietary data provided by Uber, in contrast to publicly available and less detailed data that have been used in previous research, they calculate monthly ridesharing activity by census tract and compare it with federal data on traffic fatalities from the National Highway Traffic Safety Administration. Looking at all tracts with ridesharing activity by the start of 2017 — some 45,000 tracts across the US that account for nearly 16,000 annual traffic deaths — they find that 2019 levels of ridesharing activity diminished the probability of a fatal alcohol-related crash by 0.043 percentage points, a 6.1 percent decrease in these fatalities.

Combining this estimate with data on the number of traffic deaths in 2019 implies that ridesharing was associated with the avoidance of 214 deaths. Using the Department of Transportation’s standard value of a statistical life, $10.9 million, to assess the economic gains associated with this mortality decline implies an aggregate gain of about $2.3 billion.

The researchers caution that their findings may underestimate the impact of ridesharing because they only have data on Uber. However, during this time period Uber dominated the industry — its closest competitor, Lyft, had 6 percent of the market in 2015 and 14 percent in 2016 — so the data in this study are likely to be a good proxy for ridesharing overall.  Another measurement concern is that some fatal crashes involving alcohol may not be chalked up to drinking. Even if police charge a driver with an alcohol violation, a crash is not counted as involving alcohol unless the driver also has a positive blood-alcohol concentration or officers report alcohol involvement. This practice is likely to lead to an undercount of drinking-related auto fatalities.