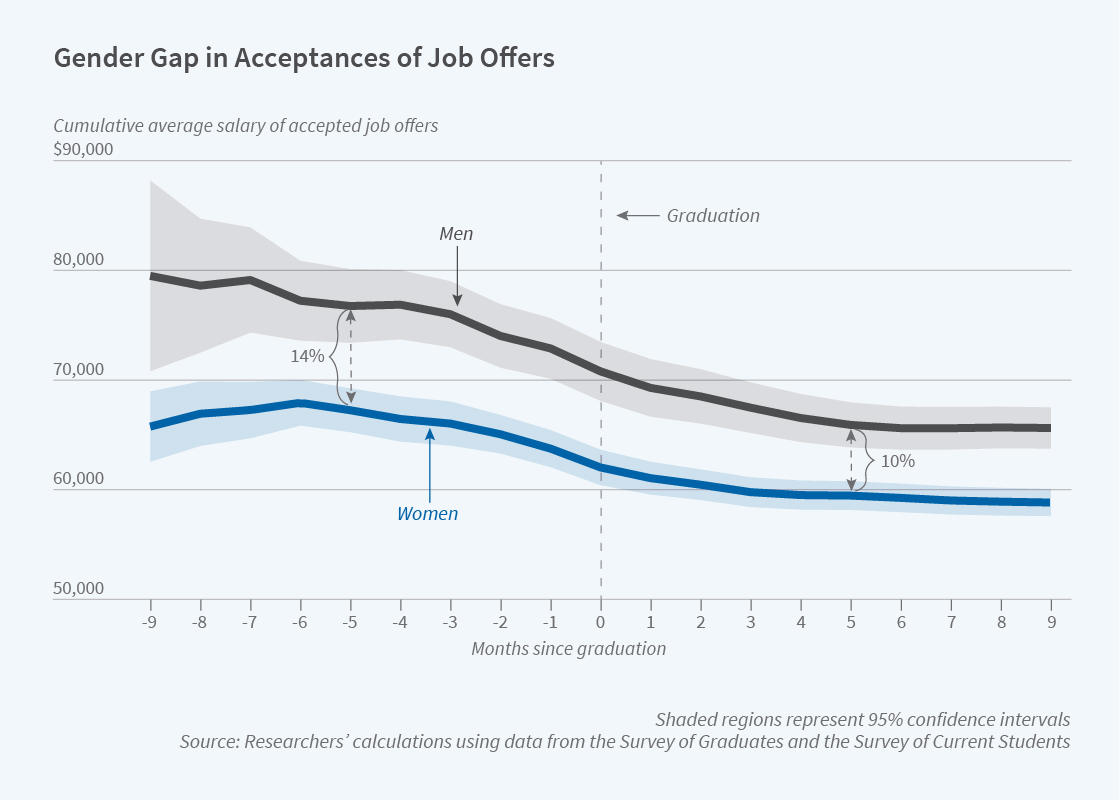 Among business school undergraduate alumni, men were more willing than women to hold out for higher-paying first jobs after graduation.

Gendered differences in men’s and women’s behavioral traits — namely, risk preferences and overconfidence — generate differences in job search behavior and may explain as much as 25 percent of the difference between men’s and women’s earnings in their first jobs, according to survey data on job search behavior analyzed by Patricia Cortés, Jessica Pan, Laura Pilossoph, and Basit Zafar in Gender Differences in Job Search and the Earnings Gap: Evidence from Business Majors (NBER Working Paper 28820).

The researchers surveyed alumni who graduated with a bachelor’s degree from Boston University’s Questrom School of Business from 2013 through 2019. About 1,000, 20 percent of those contacted, responded. Men and women had similar employment outcomes, but men self-reported greater willingness to take risks and generally were more optimistic about their future wages. Optimism makes graduates less likely to accept a job offer at any point in time. Risk-tolerant individuals are more likely to accept jobs later than risk-averse job seekers. Since more-optimistic and risk-tolerant individuals have higher reservation earnings, this likely generates a positive relationship between risk tolerance (as well as optimism) and earnings and contributes to gender disparities in earnings.

Of those alumni accepting an offer, women on average accepted jobs almost a month earlier than men. At graduation, 60 percent of women had a job, compared to 52 percent of men, and 92 percent of women accepted jobs within six months of graduation, compared to 86 percent of men. Women were also more likely to start searching for jobs earlier, a factor that partially explains the gender gap in the timing of job acceptance. Both genders averaged about 1.7 offers per person and they were equally likely to have rejected at least one offer. Men were more likely to rely on referrals in their job search. Women were more likely to rely on the university career center.

In 2017 dollars, women’s earnings in their first post-graduation year averaged $6,719 less than men’s, a difference of about 10 percent. Adjustment for individual-level differences in academic and socioeconomic backgrounds reduced this gap by almost 30 percent, to $4,542, or about 7.4 percent of mean earnings. Most of the individual-level adjustment was driven by men being more likely to choose finance and other higher-paying course concentrations. Women were more likely to select less lucrative concentrations like advertising and marketing. Inclusion of the survey measure of risk preferences further reduces the gender earnings gap to $3,687, implying that gender differences in risk preferences can explain about 20 percent of the residual gender gap in accepted offers.

Students who expected to graduate between 2018 and 2021 completed an in-class survey asking “What would the lowest annual total compensation (including base pay, signing bonus, and bonus pay) have to be for you to accept a job offer?” After controlling for individual-level background variables, the average lowest wage women would accept was about $2,000 less than that for men. Students were also asked about expected earnings in their first job; about 54 percent overestimated their actual subsequent wage. Of the graduates, 41 percent of women and 52 percent of men reported having regrets about their job search. Although men were slower to revise their earnings expectations downward if they did not receive job offers, the researchers conclude that, on average, men benefited in terms of higher earnings relative to women from overestimating their future offers. However, at the individual level, a lot more men were worse off because of their greater overoptimism and experienced larger welfare losses from their biased beliefs.

The researchers estimate a model of job search that incorporates these features. The model can match the patterns in the data. Counterfactual policies reveal that debiasing students’ beliefs increases welfare and reduces the gender gap. In addition, a policy that allows for recalls reduces the gender gap in accepted offers by almost a third.

Gender Differences in Job Search and the Earnings Gap: Evidence from Business Majors