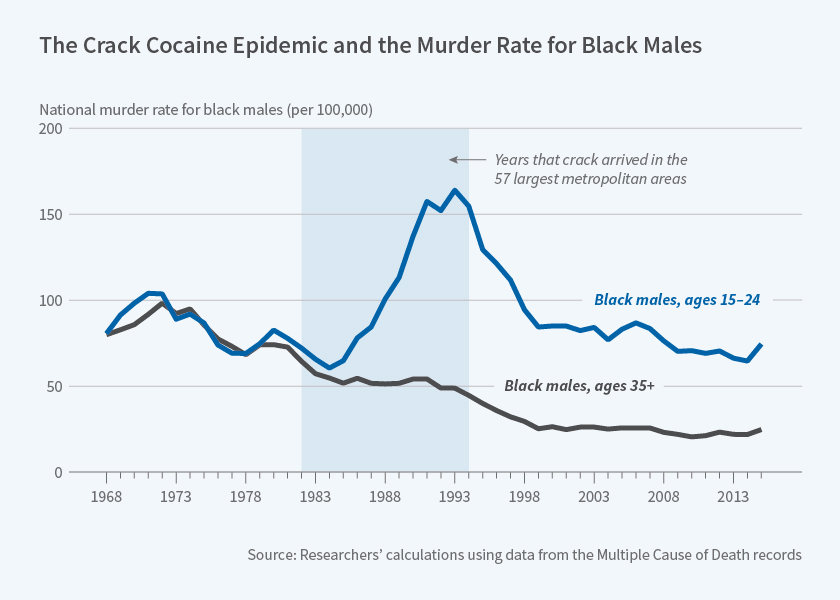 Murder and suicide rates among young black males remain elevated years after crack cocaine-related violence swept America's cities, likely because of the increase in guns during the crack era.

Reverberations of the crack epidemic of the 1990s continue to take a deadly toll on young black males in the United States.

In Guns and Violence: The Enduring Impact of Crack Cocaine Markets on Young Black Males (NBER Working Paper No. 24819), William N. Evans, Craig Garthwaite, and Timothy J. Moore estimate that murder rates of black males aged 15 to 24 doubled soon after the crack epidemic hit their cities and that 17 years later, these rates were still 70 percent higher than they might otherwise have been.

The researchers attribute this persistence of elevated fatality rates to the surge in gun possession that occurred as dealers armed themselves for ferocious turf battles when crack first hit the streets. While demand for crack has declined and the market has moved underground, higher gun possession has persisted in cities where the crack epidemic was particularly severe, and has spread far beyond drug dealers as other young black males armed themselves in response to the more dangerous environment.

The researchers studied 57 cities where crack arrived between 1982 and 1994. They examined data from eight years before the influx and 17 years after in each city. They looked at subgroups by race, gender, and age. They find that the crack epidemic has had the longest-lasting impact on young black males. In the pre-crack era, murder rates and trends were similar among younger and older black men. While the crack crisis also drove up murder rates for other races, only the rate among black males aged 15–24 failed to decline to previous levels. In recent years, their murder rate has stayed at three times the level of that for black men over the age of 35. Young black males accounted for a 45 percent greater share of all murders 17 years after the crack markets emerged than they did beforehand. For young black men, there was also a sharp rise in gun-related murders and also gun-related suicides after the arrival of crack, but no corresponding change in murders and suicides without guns.

Domestic disputes — those between family members and intimate partners — turned more deadly thanks to ready access to guns. While the murder rate for domestic disputes that did not involve guns remained unchanged in the post-crack era, it increased markedly when guns were a factor, the researchers report.

Rates of gun possession being difficult to measure, the researchers used gun-related suicides as a proxy. They divided the sample cities based on whether the arrival of crack cocaine coincided with an above- or below-median increase in the fraction of gun-related suicides. Seventeen years out from crack's emergence, the murder rate among young black men in cities with an above-median increase in such suicides was 50 percent higher than the rate in cities with a below-median increase. The researchers did not find any difference across these cities in murder rates of black males aged 35 years and older.

The researchers estimate that in 2010, the elevated rate of gun possession led to 970 additional murders of black males aged 15–24. That represented 40 percent of all murders of black males in that age group that year. The study also attributes nearly a quarter of the suicides of young black males that year to the higher prevalence of guns. The authors find that "...even today, nearly 25 years after the peak of the systemic violence in the retail crack market, crack-related violence and suicide may explain approximately one-tenth of the gap in life expectancy between white and black males."