The Mortality Effects of Retirement 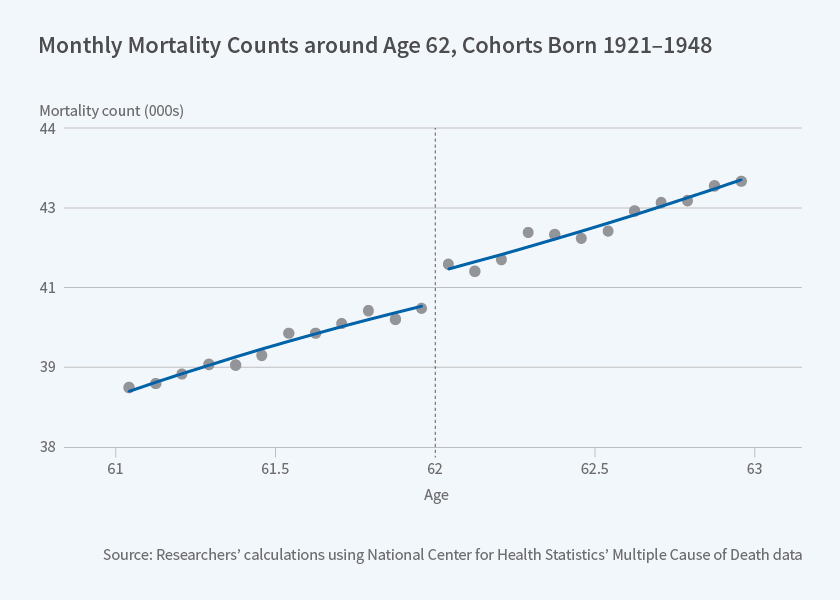 How does retiring affect your health? This question is of interest both to workers who are nearing retirement age and to policymakers who design retirement programs. Retirement is often associated with changes in activity and lifestyle that may affect physical, mental, and cognitive health in a variety of ways. The health effects of retirement may extend to mortality, perhaps the ultimate measure of health.

Studying the health effects of retirement is complicated by the fact that people choose when to retire and some retire because of poor health, so higher mortality rates after retirement might reflect the effect of pre-retirement health. In The Mortality Effects of Retirement: Evidence from Social Security Eligibility at Age 62 (NBER Working Paper No. 24127), researchers Maria Fitzpatrick and Timothy Moore explore this issue using an approach designed to surmount this challenge.

Social Security benefits are first available starting at age 62, generating a surge in retirements in the month when people reach this age. Any sudden increase in mortality rates after the 62nd birthday can be attributed to this increase in retirement as long as other factors that affect mortality evolve smoothly with age.

Data for the analysis come from the National Center for Health Statistics' Multiple Cause of Death files for the years 1979 to 2012. These data include decedents' dates of birth and death reported to the exact day, allowing the researchers to calculate precisely how long before or after age 62 the death occurred. Pooling across years, the researchers have a sample of over 1.5 million deaths within a narrow range around the 62nd birthday.

Turning to the results, the researchers find that male mortality increases by about 2 percent at age 62. Over the 34 years they study, this translates into an additional 11,000 deaths in the year after the 62nd birthday. The increase in female mortality is smaller and less statistically significant. Among men, the increase in mortality is larger for unmarried men and men without a high school diploma.

Interestingly, those groups that experience larger mortality effects also experience larger declines in labor force participation at age 62, supporting the idea that labor force exit is the key driver of these results. By contrast, Social Security claiming at age 62 is the same for men and women and there are no distinct changes in health insurance coverage or income at age 62, suggesting a lesser role for these other mechanisms.

In terms of the causes of death, the clearest increases after age 62 are in deaths due to traffic accidents, chronic obstructive pulmonary disease, and lung cancer, which collectively account for nearly half of the increase in male mortality. These findings are consistent with other studies that find an increase in deaths from these causes after job loss and an increase in smoking at age 62.

The researchers caution that it is not possible to discern from their analysis whether the increase in mortality persists or compounds over the long term, nor whether the increase in mortality translates into broader changes in health. They also note that heightened mortality risks may be offset by welfare gains related to stopping work. Thus, their findings are one input in a larger discussion regarding the optimal timing of retirement.

This research was supported by a grant from the Alfred P. Sloan Foundation and a Steven H. Sandell Grant from the Center for Retirement Research at Boston College.

The Mortality Effects of Retirement: Evidence from Social Security Eligibility at Age 62