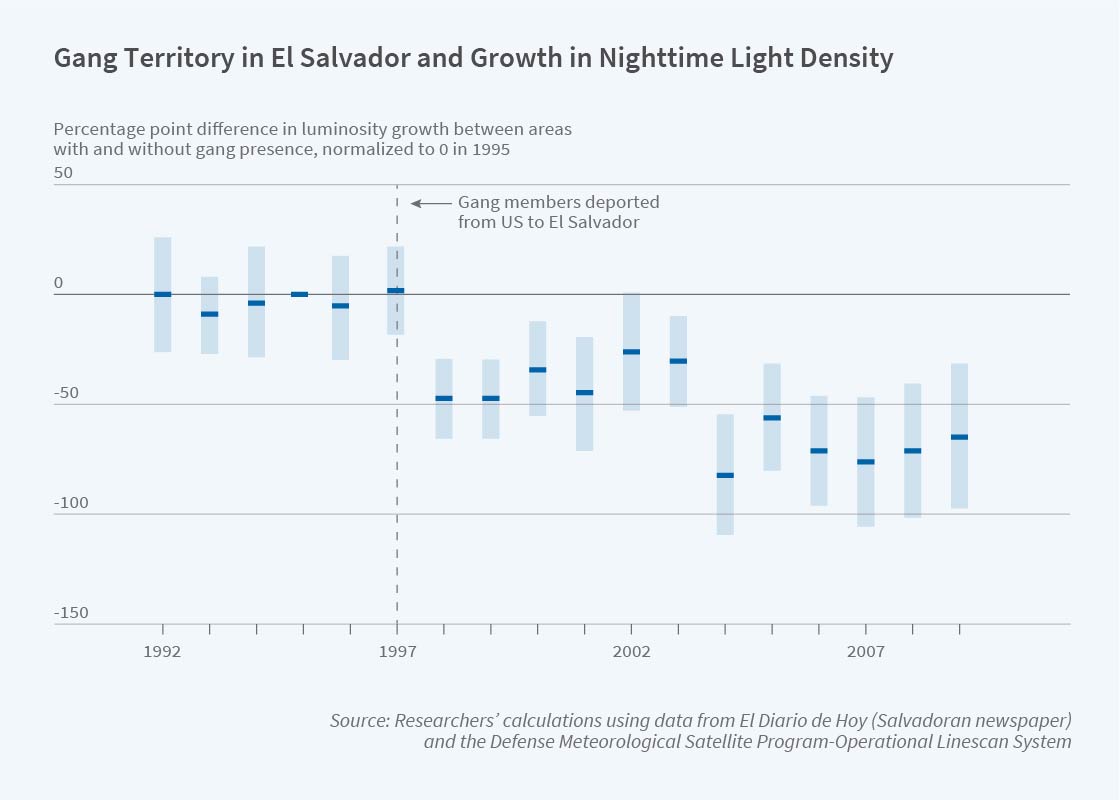 Residents of gang-controlled neighborhoods in San Salvador have worse dwelling conditions, less income, and lower probability of working in a large firm than those living just outside gang territory.

The researchers study a natural experiment that occurred in the 1990s. Before 1997, El Salvador did not have any powerful gangs. In that year, the United States began implementing an immigration policy that made it easier to deport individuals with criminal backgrounds to their countries of origin. As a result, many Salvadoran migrants who were members of California-based gangs, in particular MS-13 and 18th Street, were deported to El Salvador, where they established the gangs and gained control over parts of the country.

The researchers estimate the impact of gangs on socioeconomic development in two ways. First, they use the boundaries of gang-controlled neighborhoods in El Salvador’s capital, San Salvador, to compare economic outcomes inside and outside these neighborhoods. They study outcomes using data from the 2007 census and a 2019 geocoded survey they conducted. Second, they compare the growth in nighttime light density in locations with high and low gang presence between 1992 and 2013.

The results indicate that residents of gang-controlled neighborhoods have worse dwelling conditions and are worse off than those living just 50 meters away but outside of gang territory. Residents of gang areas have $350 lower monthly income than individuals in neighboring nongang locations and are 12 percent less likely to work in a firm with at least 100 employees.

These differences did not exist before the gangs arose. When the researchers replicate their calculations using data from the 1992 census, the results show that neighborhoods on both sides of what would become the gang-territory boundary had similar socioeconomic and geographic characteristics. The light density analysis confirms this. After the arrival of gang members from the US, areas with gang activity experienced lower growth in nighttime light density compared to places without gang presence, while before the deportations both these locations had similar rates of growth.

A key mechanism through which gangs affect socioeconomic development is restrictions on nongang individuals’ mobility in the neighborhoods they control. To maintain control over their territory and prevent the police and members of rival gangs from entering it, both MS-13 and 18th Street use a checkpoint system, stopping free movement into and out of their neighborhoods. The researchers suggest that as a result of these restrictions, residents of gang-controlled areas often cannot work outside of gang territory and therefore must settle for low-paying jobs in small firms in the neighborhoods where they live.

Although restrictions on individual mobility may not be the sole mechanism behind the lower socioeconomic development of gang areas, the researchers are able to reject a number of other plausible explanations. They find no differences in the availability and quality of such public goods as schools and hospitals, which suggests that the government has been willing to provide public goods in gang-controlled areas in order to avoid ostracizing residents. They also show that the lower socioeconomic development of gang-controlled neighborhoods cannot be explained by selective migration of individuals across gang territory boundaries, differential exposure to violence, or higher levels of informal employment and unemployment in gang-controlled neighborhoods.