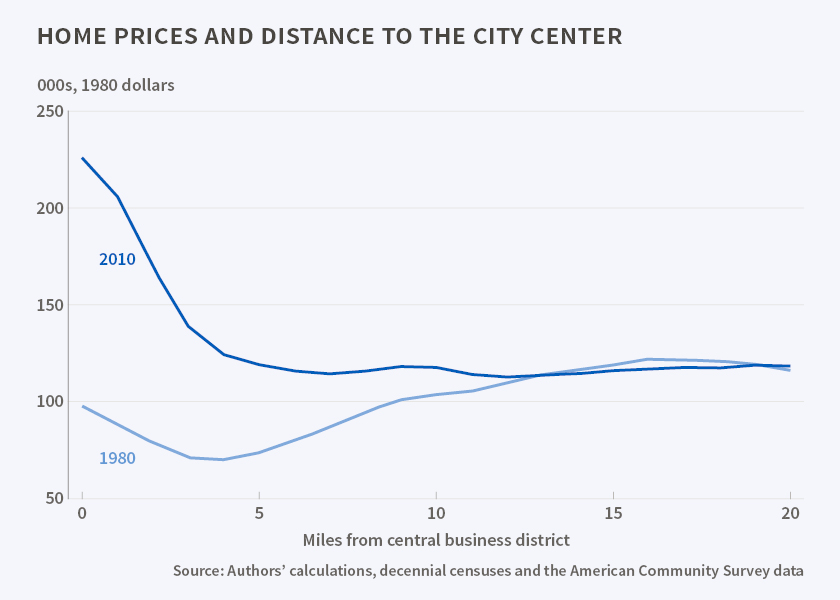 Moving closer to city centers is a time-saver for better-educated, better-paid 'leisure losers;' their preferences seemingly have reversed the long-standing trend toward suburbanization.

In the period following World War II, suburbanization dominated the US landscape. However, as the century drew to a close, urban gentrification, a broad-based rehabilitation of the central city as the place to work, live, and play, emerged as an important development. Since the 1980s, and more so recently, poverty has been rising faster in suburban areas than in cities. Between 2000 and 2010, for example, poverty rates in Manhattan and Brooklyn declined by 10 percent, while poverty rose on Staten Island, the most suburban of New York City's five boroughs.

The driving force in this change, according to Lena Edlund, Cecilia Machado, and Maria Micaela Sviatschi is a growing corps of time-starved, high-income, low-leisure households whose members seek to locate close to work.

In Bright Minds, Big Rent: Gentrification and the Rising Returns to Skill (NBER Working Paper 21729) they show that in 1980, US central-city residential real estate carried only a slight price premium. In fact, prices were higher for properties more than ten miles away from city centers than for those that were closer. By 2000, city centers were commanding the highest prices, with prices falling sharply with distance for the first five miles, and then holding steady as distance increased further.

Rising labor supply of skilled workers plays a key role in explaining this set of changes. The fraction of college graduates working full time started to rise in the 1970s after three decades of little change. The increase was more pronounced for women than men. Since 1990, there also has been a notable increase in the fraction of men and women working more than 50 hours a week.

The researchers argue that gentrification may be the result of high-income households seeking to protect increasingly scarce leisure by reducing time spent on low-utility activities such as commuting. In other words, they trace the rise of centrality as the local amenity of choice (a departure from the earlier trend of suburbanization) to high-income households being increasingly leisure-starved.

Gentrification and the Rising Returns to Skill