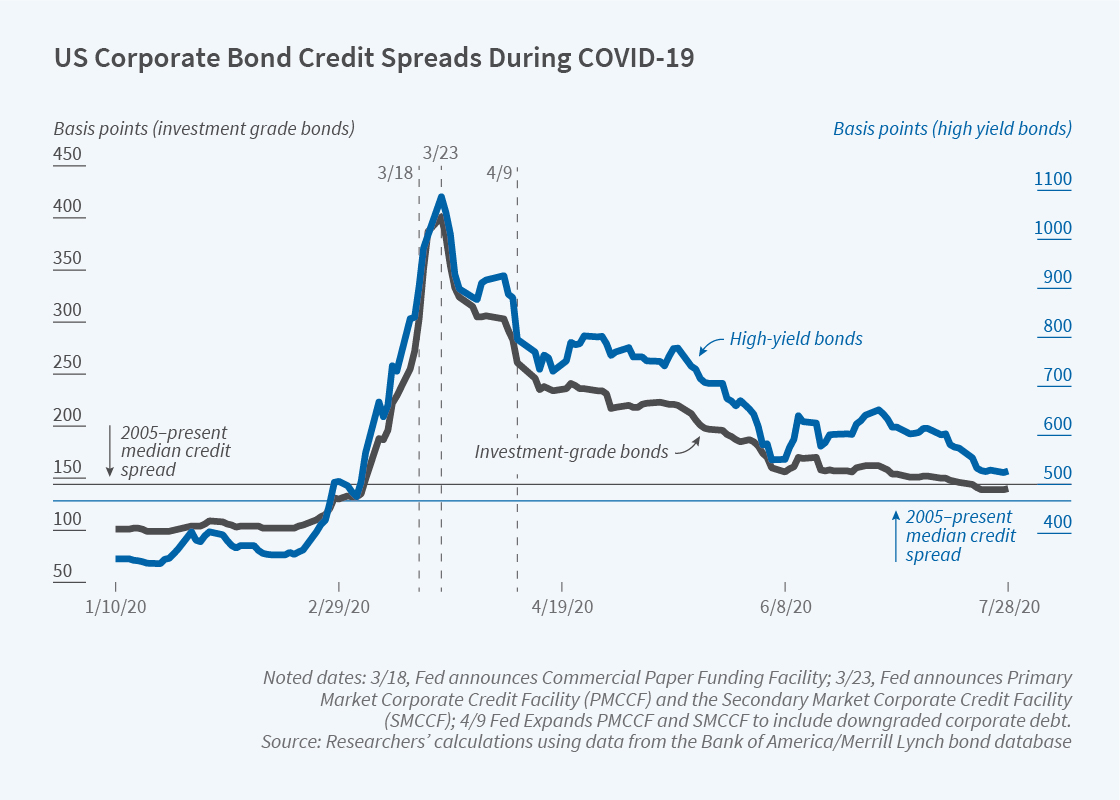 The Federal Reserve’s announcements that it would buy a progressively broader range of US corporate bonds produced sharp reductions in credit spreads for eligible securities.

In late February 2020, a few weeks after Chinese officials announced possible human transmission of the COVID-19 virus, severe dislocations started to emerge in global credit markets. In the United States, liquidity in the commercial paper and corporate bond markets deteriorated significantly by early March. In response, the Federal Reserve announced on March 17 and 18 a number of emergency measures to shore up the critical short-term funding markets. Despite the Fed’s actions, liquidity conditions in the corporate bond market — a key source of longer-term financing for US companies — worsened further and credit spreads shot up.

To avert a market meltdown, the Fed announced on March 23 that it would buy corporate bonds in the primary and secondary markets. Secondary market purchases of eligible bonds, defined as investment-grade bonds with the remaining maturity of less than or equal to five years, would be made through the Secondary Market Corporate Credit Facility (SMCCF) and would track “a broad, diversified market index of US corporate bonds.” On April 9, the Fed expanded SMCCF eligibility to include corporate bonds from “fallen angels,” US companies that were investment grade on March 22 but had subsequently been downgraded to junk status.

In The Fed Takes On Corporate Credit Risk: An Analysis of the Efficacy of the SMCCF (NBER Working Paper 27809) Simon Gilchrist, Bin Wei, Vivian Z. Yue, and Egon Zakrajšek document economically large and statistically significant effects of the two SMCCF announcements on credit and bid-ask spreads. They study the SMCCF’s impact on the yields on individual bonds, and then aggregate their findings. They define the credit spread for each bond each day as the difference between the bond’s yield to maturity based on its daily price and the yield on a synthetic, risk-free security constructed using zero-coupon Treasury yields. As the market’s perception of a bond’s risk rises, so does the credit spread.

The announced interventions affected credit spreads even before the Fed began buying bonds. In the two weeks after the April 9 announcement, the credit spreads on eligible investment-grade bonds fell by 70 basis points relative to the spreads of similar bonds with maturities slightly above the five-year maturity cutoff. Average daily credit spreads between SMCCF-eligible and ineligible bonds from the same company narrowed by about 20 basis points.

Evidence that the Fed’s actions significantly reduced near-term default risk is particularly clear in the market for fallen angels’ bonds. These bonds were not eligible for the SMCCF until April 9. Their credit spreads rose by 340 basis points in the 10 days following the March 23 announcement, and then narrowed by 250 basis points in the 10 days after the April 9 announcement.

In addition to the market impact of policy announcements, the researchers also find an effect of actual bond purchases. On June 16, the Fed began purchasing an average of $150 million in corporate bonds daily. By the end of July, cumulative purchases totaled almost $3.4 billion. The SMCCF had purchased 1,351 individual corporate bonds issued by 482 companies. By matching each bond’s CUSIP number, purchase date and time, transaction price, and quantity in dealer-to-customer transactions, the researchers could identify all but one of the Fed’s bond purchases. They estimate intraday purchase effects by tracking bond prices in the 20 hours before and after each of the Fed’s purchases. They find that the net decline in the credit spread when the purchase was made was about 3 basis points. The researchers conclude that the SMCCF made it substantially easier for companies to borrow in the corporate bond market.

The Fed Takes on Corporate Credit Risk: An Analysis of the Efficacy of the SMCCF