The Effect of E-commerce Expansion on Local Retail 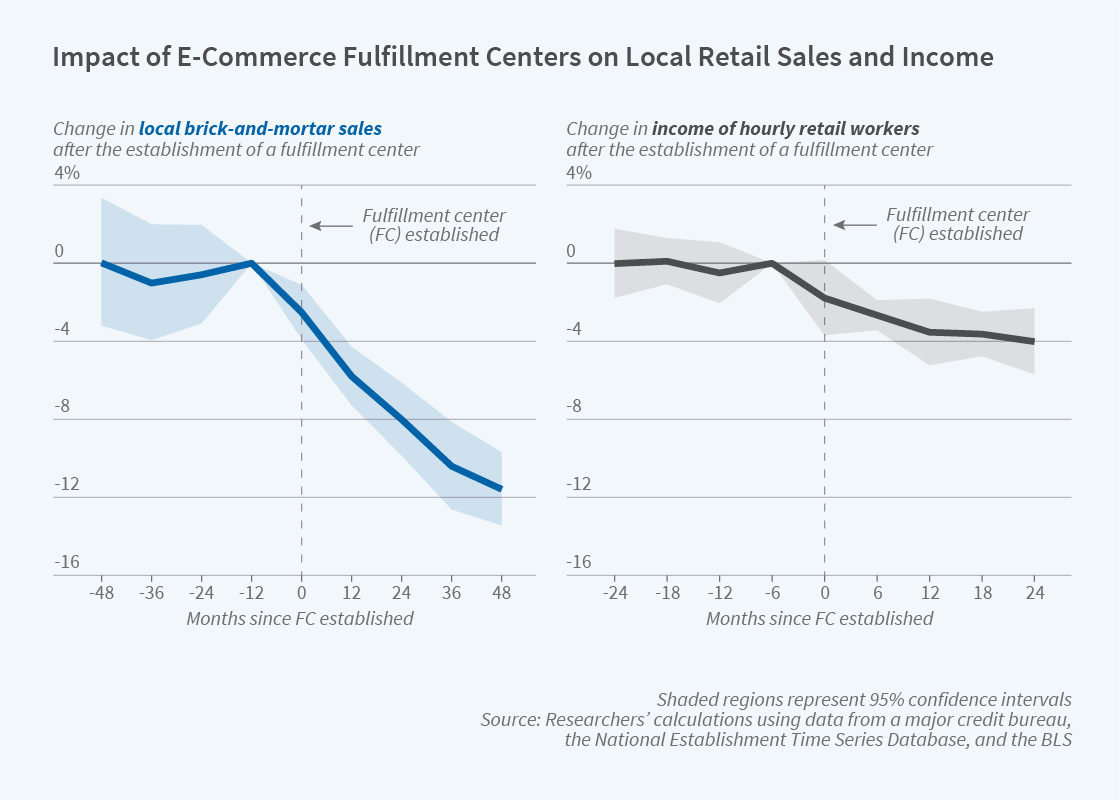 E-commerce has dramatically altered retail in the last two decades, with online sales growing from 0.63 percent of total retail sales in 1999 to 13.3 percent in 2021. In Creative Destruction? Impact of E-commerce on the Retail Sector (NBER Working Paper 30077), Sudheer Chava, Alexander Oettl, Manpreet Singh, and Linghang Zeng study how the rise of online selling has affected brick-and-mortar retail establishments and their employees.

The researchers measure the presence of e-commerce in an area using the staggered rollout of a major e-commerce retailer’s fulfillment centers across the United States. This firm had only three such centers in 2000, but more than 90 by the end of 2016. Establishing a center reduces shipment delivery times in surrounding areas, which may encourage local consumers to shift towards e-commerce and away from traditional brick-and-mortar retailers. The researchers study the trends in retail outcomes before and after a fulfillment center is established in proximate counties, and compare them with the trends in a control group of counties near where centers would be built at a later date.

Establishment of an e-commerce fulfillment center reduces retail employment growth in the host county by an average of almost 1,000 jobs per quarter.

The researchers first use a detailed employer-employee payroll dataset covering 2.6 million retail workers to explore how e-commerce growth affects traditional retail workers. The establishment of a fulfillment center is associated with a drop of 2.5 percent on average in the income of hourly retail workers in the same county, or about $825 annually. The income drop is similar for retail workers in counties within 100 miles of the center, but is negligible beyond that distance. Hourly workers’ income losses arise primarily from a reduction in hours worked.

A new fulfillment center is not associated with lower income among salaried retail workers, and the impacts of e-commerce on hourly workers’ income vary substantially with worker characteristics. Income falls the most among the youngest and oldest workers, with income falling by 3.6 percent among workers over age 64. Workers with longer tenure at retail firms see smaller losses in income, and income losses are larger among part-time workers. Income losses are largest among workers in general-merchandise and home-improvement stores, two retail subsectors where customers may place less value on their in-store experience.

The researchers next use National Establishment Time Series data to examine the impact of e-commerce fulfillment centers on traditional retail stores. Sales in the average brick-and-mortar retail store fall by about 4 percent after a local fulfillment center opens. Stores react to these drops by reducing hours per worker and by cutting employee headcount by 2.1 percent on average, or about 36 workers per 100 stores. The opening of a fulfillment center coincides with a 3 percentage point increase in the annual likelihood that brick-and-mortar stores close. The largest impacts are found among smaller and newer stores. Likewise, new stores’ rate of entry falls by 8.1 percentage points within 100 miles of a new center.

Finally, the researchers use data from the Quarterly Census of Employment and Wages to examine how e-commerce expansion affects retail employment and wage growth at the county level. Establishment of a fulfillment center is associated with reduced employment growth in retail of 2.9 percent within the same county, a loss of about 938 jobs per county per quarter, with smaller losses within a 100-mile radius. These retail losses are partially offset by increased local employment in transportation and warehousing, which gain about 256 jobs, and in restaurants, which gain about 143 jobs. Opening a new fulfillment center also coincides with increased wage growth in warehousing.

Creative Destruction? Impact of E-Commerce on the Retail Sector