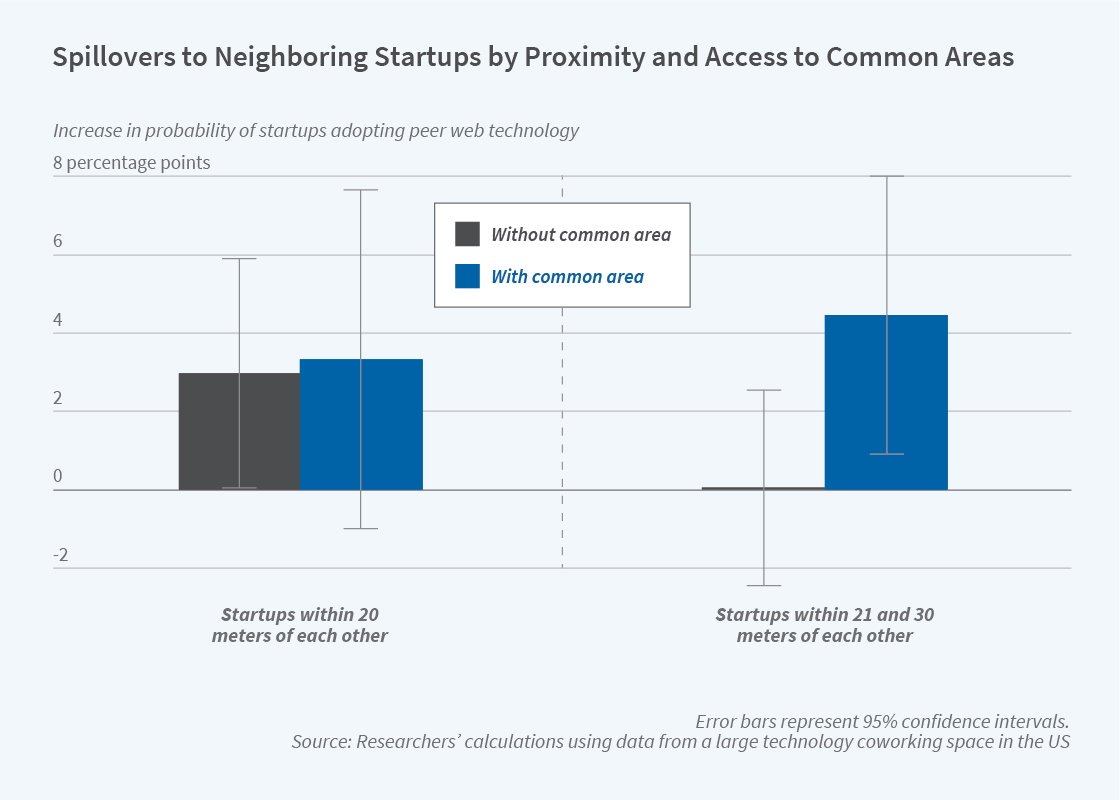 Startups located in coworking hubs can benefit from knowledge spillovers from their startup neighbors.  In (Co-)Working in Close Proximity: Knowledge Spillovers and Social Interactions (NBER Working Paper 30120), Maria P. Roche, Alexander Oettl,  and Christian Catalini find that knowledge spillovers are greatest among startup workers who socialize but are in moderately dissimilar enterprises.

The researchers studied one of the five largest technological coworking hubs in the nation, where 251 startups were randomly assigned office space in a five-story building from August 2014 to January 2017. They found that startups within 20 meters of one another were significantly more likely to adopt the same new web technology  —  a proxy for knowledge spillovers — than startups located further apart.  Startups located on the same floor but at a greater distance from one another were no more likely to benefit from spillovers than those located on different floors.

In coworking environments, startups in close proximity were most likely to share knowledge, but only if their employees interacted socially.

Workers from nearby startups were more likely to bump into each other in hallways and at copy machines, luncheon spaces, and weekly social events. As they shared experiences and feedback regarding different technologies, they reduced the exploration, experimentation, and risk-taking costs associated with innovation, the researchers conclude.

The study found that the startup environments that were most likely to result in spillovers were those with neither too much nor too little similarity, provided their workers engaged in social interactions. Two firms were considered similar if they operated in the same product market or had the same business model.

Close proximity of startups in different product markets was associated with a 3.7 percentage point higher probability of adopting peer technology. The spillover effect was 60 percent lower if the startups were similar.

The study found that physical proximity is not the only factor influencing spillover. Startups located 21 to 30 meters apart saw increased technology adoption if employees shared a common area or passage. Startups staffed primarily by women benefited from increased technology adoption regardless of how far apart they were, suggesting that their employees may have networked differently.

The study further found that physically proximate startups that were moderately similar and whose employees engaged in social activity were more likely to receive seed funding and funding of more than $1 million.

The researchers suggest that their findings are likely to apply to workers within a single organization as well as in distinct startups, and that they may offer insights for the design of workplaces that support knowledge production, entrepreneurship, and innovation.