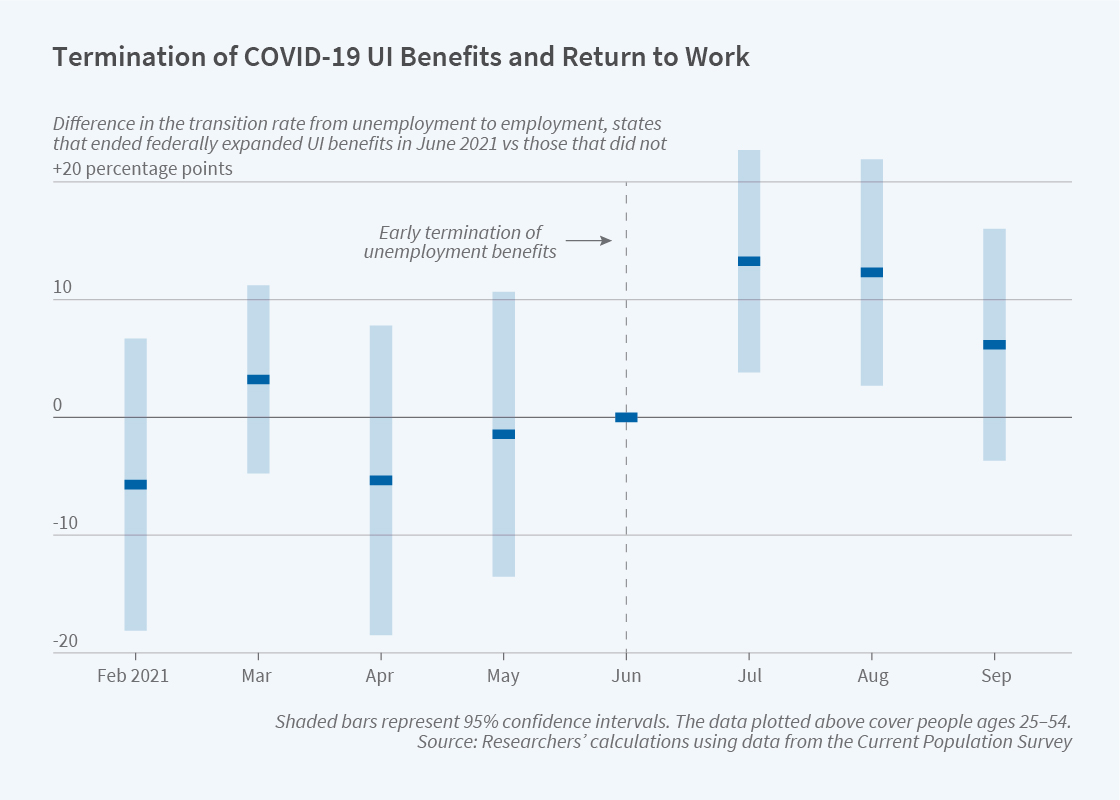 Transitions from unemployment to employment increased in US states that opted out early from federal programs that expanded unemployment benefits during the pandemic; reports of difficulties meeting household expenses also rose.

During the COVID-19 pandemic, the US government instituted two policies that increased benefits for unemployed workers. The first, Pandemic Unemployment Assistance (PUA), expanded eligibility for state unemployment insurance (UI) to some workers who are not typically covered by these programs, including the self-employed and workers in the “gig economy.” The second, the Federal Pandemic Unemployment Compensation (FPUC) program, added a $300 weekly, federally funded supplement to standard UI benefits.

Federal legislation authorized both PUA and FPUC through September 6, 2021, but 26 states chose to opt out of at least one program before that date. Eighteen states opted out of both programs in June 2021. The researchers estimate the impacts of the benefit programs by exploiting these early opt-outs, comparing unemployment trends in the 18 states that terminated PUA and FPUC in June 2021 with those in the 24 states and Washington, DC, that maintained both programs through September.

Using monthly data from the Current Population Survey, the researchers find that in states that eliminated PUA and FPUC in June 2021, the share of 25-to-54-year-old unemployed workers who found employment rose by about 14.4 percentage points in July and August 2021 relative to the share in states that maintained both programs. This effect is about two-thirds of the baseline monthly flow of unemployed prime-age workers into employment from February through June 2021 in the early-exit states.

To provide further evidence on whether the cross-state disparity was due to the elimination of PUA and FPUC, the researchers compare trends in employment transitions month by month from February to August 2021. There is no differential trend in unemployment exits across the two groups of states until July and August, when unemployment-to-employment flows in opt-out states rose 14 and 15 percentage points, respectively, above those in states that maintained PUA and FPUC. This gap disappeared again in September 2021, when all states had eliminated both programs.

The researchers also examine labor-market flows in Alaska, Florida, and Ohio, which terminated FPUC while leaving PUA’s expanded eligibility in place. Transitions from unemployment to employment increased by 8.3 percentage points in these states relative to states maintaining both programs through September, which leads the researchers to conclude that both PUA’s broader UI eligibility and FPUC’s more generous benefits slowed workers’ return to the labor market.

The researchers estimate that if the states that maintained benefits through September had eliminated PUA and FPUC in June, their July and August unemployment rates for 25-to-54-year-old workers would have fallen from 5.7 to 5.0 percent, reducing the nationwide unemployment rate by about 0.3 percentage points. The national employment-to-population ratio would have been 0.1 or 0.2 percentage points higher.

The researchers posit that the employment effects of PUA and FPUC termination may have been attenuated by the run-up in household savings during the pandemic. The share of respondents in the Census Bureau’s Household Pulse Survey reporting no difficulty in meeting household expenses fell by about 5 percentage points after states eliminated these programs, suggesting that the welfare effects of reducing unemployment benefits were mixed.