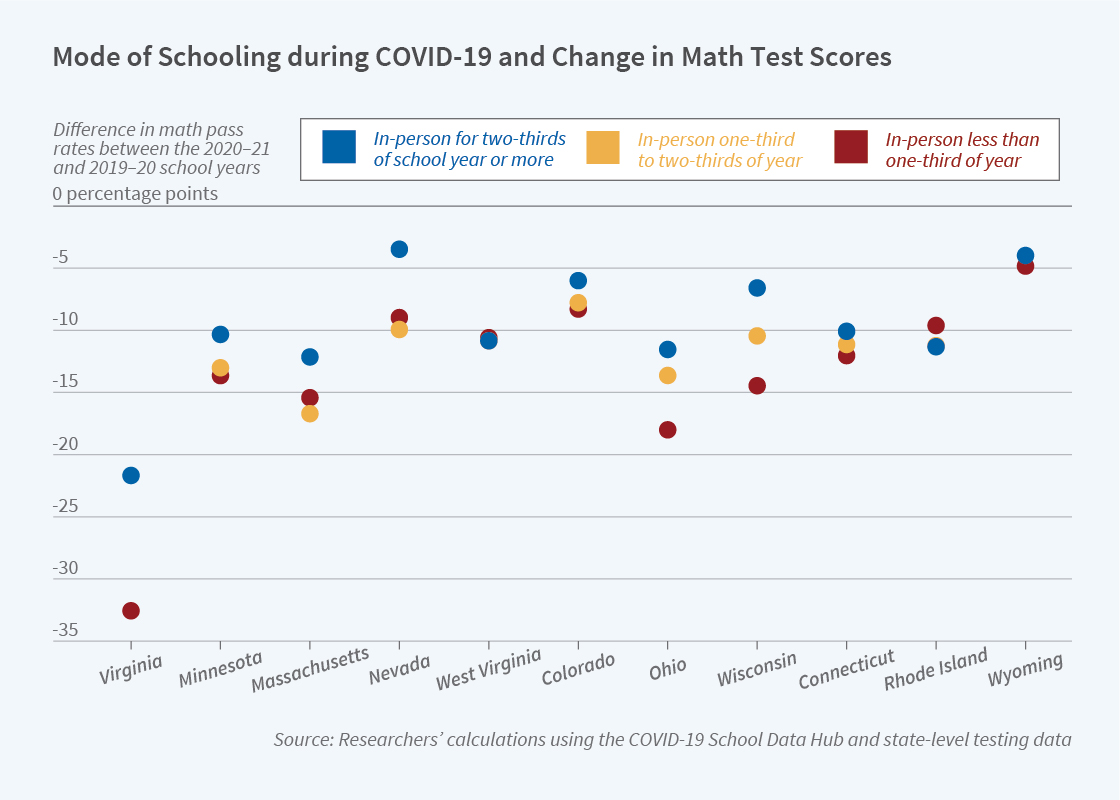 Pass rates on spring 2021 math and English tests fell among students in all types of learning environments, but the decline was greatest in districts with more remote instruction.

Students who spent a higher fraction of the COVID-19 pandemic receiving in-person instruction performed significantly better on standardized tests in the spring of 2021 than those who were taught mostly remotely, according to a study of scores in 12 US states.

The study found a wide disparity in the decline in pass rates among the dozen states surveyed: Colorado, Connecticut, Florida, Massachusetts, Minnesota, Nevada, Ohio, Rhode Island, Virginia, West Virginia, Wisconsin, and Wyoming. It ranged from a 32 percentage point drop in the math pass rate for Virginia students to a 2.3 percentage point drop in the English pass rate in Wyoming. These numbers may understate the decline in pass rates because test participation was down in 2021, particularly among students from groups that have historically scored lower, according to the researchers.

A more refined picture of the impact of remote learning emerges after considering the demographic makeup of school districts. Racial and ethnic composition correlates with pass rates on the English Language Arts exam, but not with those on the math test. Extrapolating from their findings, the researchers estimate that a hypothetical district with no Black or Hispanic students would experience a 4.3 percentage point drop in the pass rate for English Language Arts if it moved from fully in-person to exclusively hybrid or virtual learning. For a district in which half the students are Black or Hispanic, the analogous pass rate is projected to fall 9 percentage points.

The researchers also relate declines in pass rates for the English test and, to a lesser extent, the math test to the economic well-being of students in each district. For a hypothetical district with no students receiving subsidized or free lunches, they predict that moving from fully in-person learning to fully hybrid or virtual instruction would reduce the pass rate for math and English tests combined by 2.9 percentage points. In a district in which all students are eligible for subsidized or free lunches, they predict that the same instructional change would reduce the pass rate by 10.3 percentage points.

Large urban school districts with a higher share of Black and Hispanic students were more likely to rely on hybrid or virtual instruction. These districts also averaged lower pre-pandemic baseline test scores. The researchers acknowledge that test scores are but one measure of academic performance, but they conclude that virtual or distanced schooling modes cannot support student learning in the same way as in-person schooling.