Why is Infant Mortality Higher in the U.S. Than in Europe? 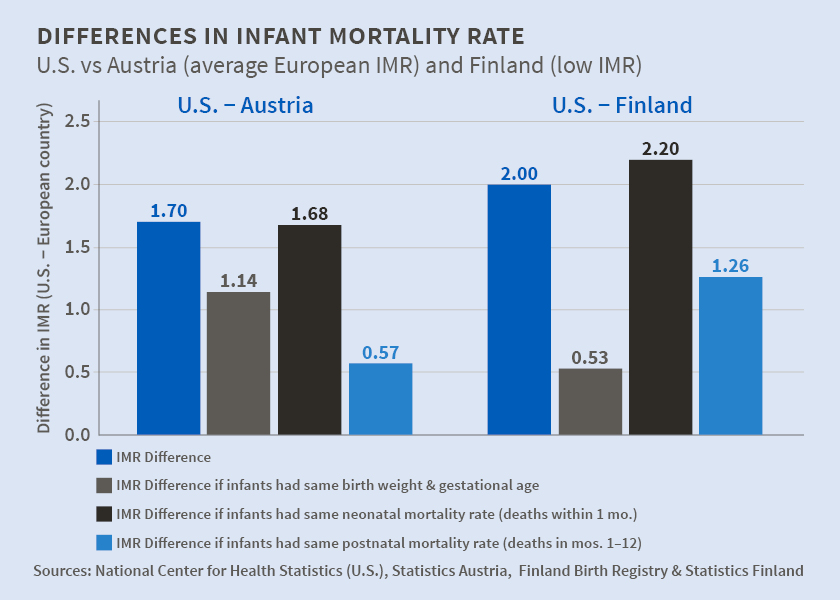 The U.S. infant mortality rate (IMR) compares unfavorably to that of other developed countries, ranking 51st in the world in 2013. In the U.S., there are nearly 7 infant deaths during the first year of life per 1000 live births, roughly twice the rate in Scandinavian countries. The U.S. IMR is similar to that of Croatia, despite a three-fold difference in GDP per capita.

What explains the U.S.'s relatively high IMR? This is the subject of a new NBER working paper by researchers Alice Chen, Emily Oster, and Heidi Williams, "Why is Infant Mortality Higher in the U.S. Than in Europe?" (NBER Working Paper No. 20525).

There are numerous theories as to why the IMR is higher in the U.S. than in other countries. There may be reporting differences for infants born near the threshold of viability, with the U.S. more likely to count them as live births while other countries are more likely to count them as miscarriages or stillbirths. Babies in the U.S. also may have lower birth weight or a lower gestational age at birth, predisposing them to worse outcomes. Finally, U.S. babies may experience a higher neonatal mortality rate (deaths within the first month of life) or higher post-neonatal mortality rate (deaths in months one through twelve) than do babies of similar birth weight and gestational age in other countries.

To quantify the importance of these potential sources of the U.S. IMR disadvantage, the authors combine natality micro-data from the U.S. with similar data from Finland and Austria. These countries provide a useful comparison because Finland has one of the lowest IMRs in the world and Austria has an IMR similar to much of continental Europe.

To address the reporting difference issue, the authors limit their sample to infants born after 22 weeks of gestation with birth weight over 500 grams, since births are required to be reported above these thresholds. They also limit the analysis to singleton births, as access to reproductive technologies has increased the frequency of multiple births, which have higher mortality rates. Making these restrictions reduces the U.S. IMR disadvantage by about 40 percent, but a substantial disadvantage remains - in this sample, the U.S. IMR is 4.65 per 1000, versus 2.94 in Austria and 2.64 in Finland.

How much of the remaining U.S. IMR disadvantage can be explained by the other three factors? To explore this, the authors conduct a counterfactual exercise, as reported in the figure. The first column shows the IMR difference for singleton births after 22 weeks and above 500 grams - 1.70 for the U.S. versus Austria and 2.00 for the U.S. versus Finland. The next column reports what the IMR difference would be if the U.S. infants had the same birth weight and gestational age distribution as babies born in Austria or Finland but the relationship between birth conditions and mortality remained what it is in the U.S. currently. Under this scenario, the U.S.-Finland IMR difference would decline by 75 percent, to 0.53 deaths per 1000 live births, due to the higher birth weight and later gestational age of Finnish infants. By contrast, the U.S.-Austria IMR difference would decline by 30 percent, to 1.14, because birth conditions in Austria are only modestly better than those in the U.S.

Finally, the authors explore how the U.S. IMR disadvantage varies by racial and education group. They find that the U.S.'s higher post-neonatal mortality rate is driven almost entirely by excess mortality among individuals of lower socioeconomic status. As the authors note, "infants born to white, college-educated, married women in the U.S. have mortality rates that are essentially indistinguishable from a similar advantaged demographic in Austria and Finland."

The authors conclude, "these new facts suggest that a sole focus on improving health at birth (for example, through expanding access to prenatal care) will be incomplete, and that policies that target less advantaged groups in the post-neonatal period may be a productive avenue for reducing infant mortality in the U.S." As an example of a potential policy lever, they point to home nurse visiting programs, which have been shown to reduce post-neonatal mortality rates in randomized trials.

Why is Infant Mortality Higher in the US than in Europe?