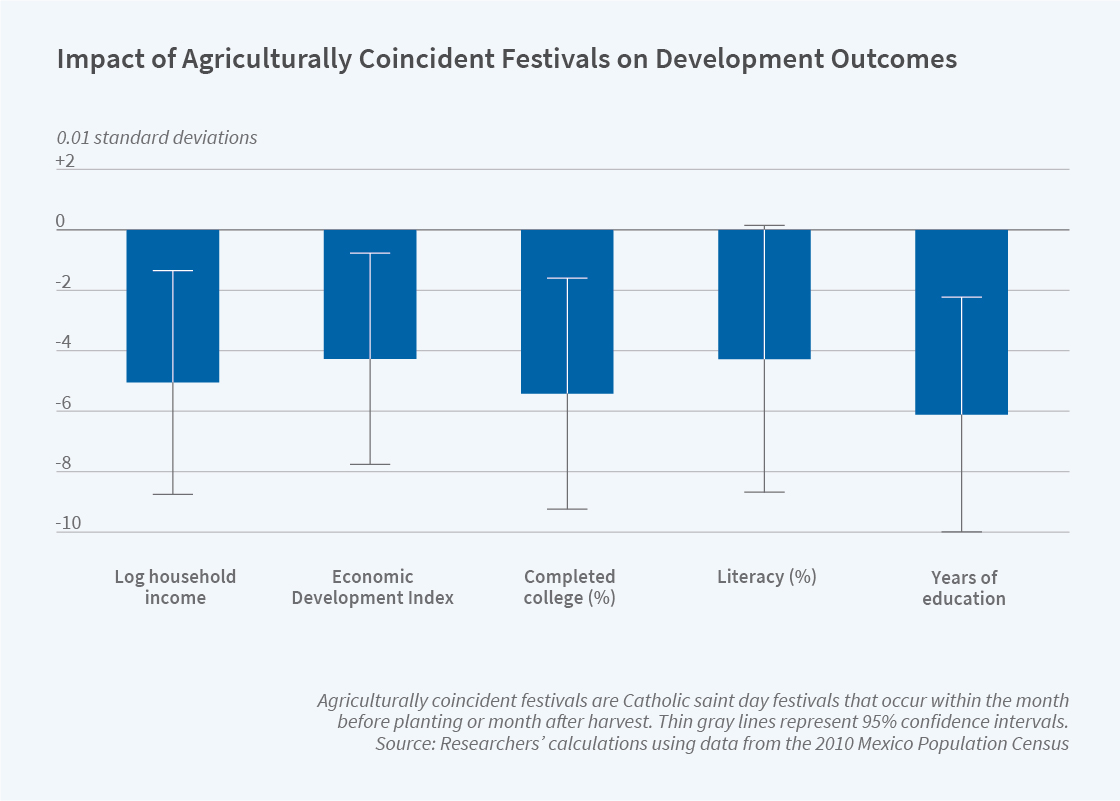 Household income in municipalities where festivals coincide with planting or harvesting is lower than in other towns, and the transition from agriculture to services has been slower.

Spanish conquerors introduced patron saint day festivals, which celebrate a particular Roman Catholic saint or holy figure associated with a town or city, during their 16th century conquest of the country. These festivals are typically public holidays and involve substantial financial expenditures by local households and governments. The conquerors assigned the religious holidays without regard for when planting and harvesting took place.

To examine the economic impact of the festivals, the researchers first determined the dates of the festivals. Then, to see which towns’ festivals coincide with peak agricultural periods, they synced the festival dates with the municipalities’ optimal planting and harvesting periods, which they gleaned from data compiled by the Food and Agriculture Organization of the United Nations. They focused on a relatively homogeneous sample of maize-growing municipalities in the former New Spain region of the country. The researchers compared the festivals’ coincidence with the agricultural schedule to municipalities’ economic outcomes, using data from the 2010 federal census.

Household income in municipalities holding festivals coincident with planting or harvesting was 20 percent lower than in other towns. An economic index constructed by the researchers, which included all the questions in the census related to economic development, was also lower. They observed particularly large negative effects on outcomes related to literacy and education. The worst economic outcomes occurred when a festival fell in the month before planting or the month after harvesting.

The researchers suggest that festival expenses tighten liquidity constraints, leading households to forego high-return but time-sensitive agricultural investment opportunities during planting and harvesting periods. Festivals just before planting season, for example, may “reduce funds available for investment in … land preparation, fertilizer, and seeds.” Just after harvest season, crop prices are low; a festival in that period may induce households to sell a greater share of their crops at these low prices, thereby missing out on higher prices if the crop had been stored. These reductions in agricultural investments lead to lower agricultural productivity in festival-coinciding locations. Maize yields for municipalities with coinciding festivals are 0.07 standard deviations lower than elsewhere. This reduction in agricultural productivity due to coinciding festivals may not be noticeable to communities in the short run, from one year to the next. But over the long run, persistently lower agricultural productivity inhibits the structural transformation out of agriculture and into the modern sectors of the economy. Municipalities with festivals coinciding with planting or harvesting have higher shares of workers in agriculture and significantly lower shares of workers in services.

In light of these negative impacts on economic development, why do festivals around planting and harvesting persist? Using 2008–18 survey data from the AmericasBarometer — Vanderbilt University’s Latin American public opinion research project — the researchers constructed indices of religiosity and of social capital. They also constructed municipality-level measures of income inequality. Municipalities where festivals coincide with critical agricultural activity have higher levels of both religiosity and social capital and lower levels of income inequality, suggesting a trade-off between equity and efficiency. The higher level of religiosity and social capital in locations with coinciding festivals may explain why these festivals persist.